Insights From Panthers Training Camp with the Head Team Physician 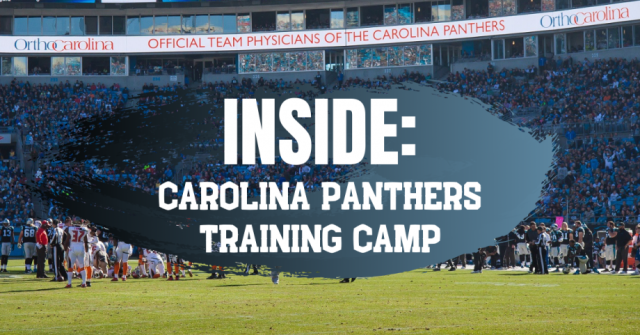 OrthoCarolina’s Dr. Patrick M. Connor sees a variety of patients each day both in the office and on the field. Going into his twenty-third season with the Carolina Panthers, the head team physician gives some insight into what happened during the offseason and how he builds relationships with the players and staff.

Listen to the full interview on the Roaring Riot’s Riot Report podcast:

Here are a few things we learned from Dr. Connor's interview:

1,000 MRIS REVIEWED AT THE COMBINES

Dr. Connor called this year’s NFL Combine “typical from a medical standpoint.” The medical team reviewed about 1,000 MRIs on nearly 350 players. Reports back to the Panthers organization are then used during the draft.

RELATED: Six Things We Learned About the NFL Combine from the Panthers’ Head Team Physician

INSIDE THE DRAFT WAR ROOM

Though Dr. Connor says 99% of his work for the draft is done during the combine, he’s still in war room as picks are being made. What’s his role? If the team is considering several players for an upcoming pick he can speak to any medical concerns. This information, he says, is one small component of many that come into play when the team makes decisions.

IN LOCKSTEP WITH THE HEAD ATHLETIC TRAINER

Even during the offseason, Dr. Connor is in constant communication with Panthers Head Athletic Trainer Ryan Vermillion. Between Dr. Connor and Panthers Assistant Team Physician Dr. Durham Weeks, one of the two are personally at training camp each day.

Connor and Vermillion have worked together for 19 seasons now. “It's great to have that symbiotic relationship where we come at things from a different angle but clearly we have the same goal and that’s to take care of the players,” Dr. Connor says.

Vermillion and his staff even join Dr. Connor in the operating room to observe. Dr. Connor says this offers them perspective on rehab and therapy.

- Be treated by the same physicians who keep our highest-level athletes healthy. Learn about OrthoCarolina locations near you or call 704.323.2778 to make an appointment today.

Dr. Connor is the best! After four months and a total shoulder replacement, I can swim backstroke with great form. My internist said at my annual exam, ‘that is not normal. I have not seen a TSR patient who could swim backstroke!’ Kudos, Dr. Connor!
- Susan Fehrer

Dr. Conner has performed surgery on my husband, Dave and me. He is outstanding. I hope we will be available for some more surgery coming up. He is the best. We love him. He is very compassionate and an excellent surgeon. Thank you Dr. Conner for your outstanding work and your kindness. Dave and Betty (Anne) Galant. It has been a long time. God bless.
- Betty Anne Galant