Heading the Ball in Soccer: Is It Safe? 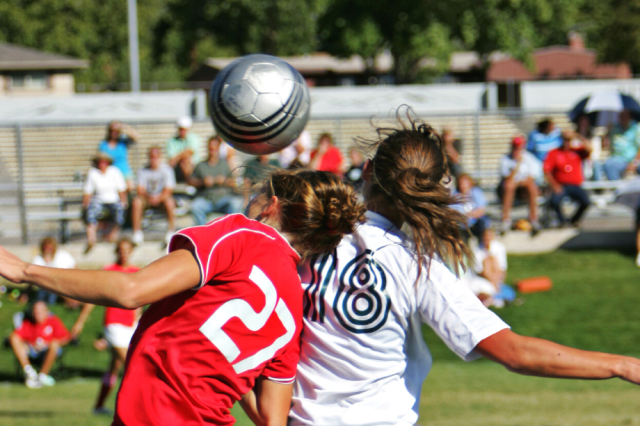 What is your take on heading the ball? My daughter is 14 years old, and her pediatrician told her she did not want her heading the soccer ball. However, they are trained in practice to head the ball.

Few topics have garnered more attention in the media recently than head injuries.

The issue has taken a front seat in almost all youth and adult sports – even professional sports – and rightfully so, given the high stakes of even mild brain injuries.

US Soccer banned heading in children under the age of 10 and placed limitations on heading practice in athletes aged 11 to 13 years.

In order to answer this question, we first have to divide head injuries into two broad categories.

The first is Sports-Related Concussion (SRC), which is caused by an acute, strong impact to the head that leads to problems with thinking and other neurologic symptoms.  The symptoms of concussion include headache, cognitive problems such as mental fogginess or changes in memory, problems with balance and coordination, behavioral changes such as irritability, and slowed reaction time1.  More serious concussions can even involve temporary loss of consciousness.

The second is Neurodegenerative Disease and/or Chronic Traumatic Encephalopathy.  These refer to long-term neurological issues that arise from multiple small impacts to the head over years of exposure in sports2.  While each individual impact isn’t enough to cause problems in and of itself, the sum of all the impacts can over time.  CTE is a unique form of brain disease that can cause dementia, behavioral issues and even death in former athletes, and has been thrust to the national stage after several high-profile professional athletes were felt to have succumbed to this condition.

Purposeful Heading: What to Consider

As we think about purposeful heading (this is the official medical term) in youth soccer, we have to ask three important questions.

1. Does purposeful heading lead to increased risk of concussion?

The majority of concussions in soccer DO NOT occur from contact between the head and the ball during purposeful heading.

The most common mechanisms for a concussion are player-to-player contact (head-to-head, head-to-body) and head-to-ground contact2.  This means that banning purposeful heading would only have a small impact on reducing concussions in youth soccer.

The few studies that are available that look at the forces imparted to the head and brain during purposeful heading suggest that the forces involved are quite small in comparison to other sports such as football or hockey2.

Training athletes, coaches and all stakeholders to recognize and report concussions and use standardized concussion assessment tools is likely to have the greatest impact on the health of youth soccer athletes, rather than specific rule changes.

Looking at data from adolescents and adults, the predominance of the data suggests that there are no intermediate or long-term adverse neurocognitive effects from purposeful heading.

Unfortunately, there is no good data on youth athletes. There may be some short-term effects such as headache.

There was a recent high profile article in the New England Journal of Medicine that suggested that former Scottish professional soccer players were five times more likely to die from neurodegenerative disease than other adults3 (and interestingly LESS likely to die from all other causes).

This was an imperfect study in that it was retrospective (the scientists looked at the data after the events occurred), but it still raises legitimate concerns about heading. There are unfortunately no other good studies that show a link between neurodegenerative disease and playing soccer.

In summary, we don’t have enough information at this point to know the answer for sure.

3. What should we be doing to minimize the risk of head injury as it pertains to purposeful heading in youth soccer?

Although a true causal link between purposeful heading and long-term neurological conditions has not been established, given the potential for significant harm with head injuries, most experts recommend using the “precautionary principle” – meaning taking pragmatic action with lesser levels of evidence.

Most experts agree there currently is not enough evidence of harm to recommend a blanket policy that bans purposeful heading in all children.

Allowing children to do headers in games but not allowing them in practice is a flawed strategy, as children won’t be able to develop the proper skills to safely execute the header.

Experts recommend short, spread-out training sessions that focus on appropriate heading technique. Only position-specific heading skills should be taught to minimize the overall amount of heading.

Players should be taught to head the ball from their frontal hairline, and it’s very important for them to contract their neck muscles at the time of impact to reduce force transmission to the head and brain.

The available research shows that the stronger your neck muscles are, the less acceleration is imparted to the head and brain during purposeful heading4.  This highlights the tremendous importance of neck strengthening in youth soccer players.

This is even more important in female athletes and younger players that have smaller neck girth, generally weaker neck muscles, and a lower effective mass to absorb impact.

United Soccer Coaches has already developed a youth neck strengthening program and this could be implemented quite easily during training sessions.

Numerous studies have shown that lower ball pressure and lower ball mass reduce acceleration and impact imparted to the brain during purposeful heading.

Experts all agree that during heading training sessions balls at the lowest end of mass and pressure regulations should be used.

Putting It All Together

Let’s bring it back to your 14-year-old daughter.  Based on the current US Soccer regulations, it is considered appropriate for her to be engaging in purposeful heading.

Since there currently isn’t enough evidence to prove long-term negative effects of heading, I expect it will be here to stay in the sport for the foreseeable future.

While the decision to allow her to participate in purposeful heading is a personal/familial decision, there are pragmatic things she can do to reduce her risk of head injury and/or neurodegenerative disease if she elects to continue with heading.

I would recommend her learning about the signs and symptoms of concussion, and make sure she knows the importance of reporting any of these symptoms. I would make sure she has learned excellent heading technique and that she is regularly working on strengthening her neck muscles.

Finally, you might talk to her coaches about ball properties during heading practice, with the goal of having the lowest acceptable ball pressure and mass.

How to Prevent Soccer Injuries Upper Extremity Injuries in Soccer Are More Common Than You Think ACL Tears for Women - Why Female Soccer Players Are 6 Times More Likely to Become Injured Beginner Hot Yoga Tips A Well Balanced Runner High-Intensity Exercise Part II: Some common injuries Why Cycling is a Great Sport to Pick Up in Your 50s and Where to Go Around Charlotte A Simple Way to Improve Your Running Running Race Etiquette
View All Related