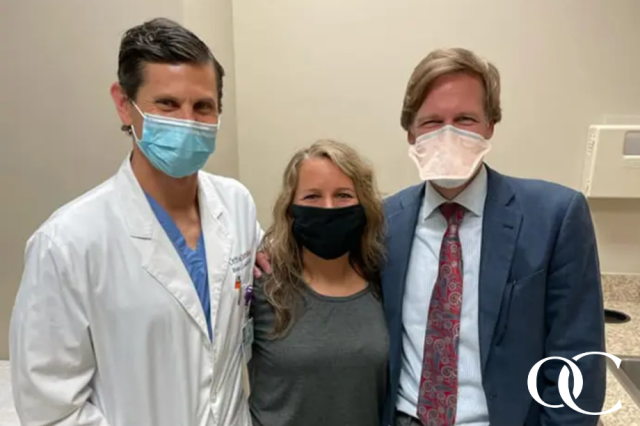 Following the loss of a limb, many patients do not have the financial resources to obtain a prosthesis. Though expensive, prosthetic limbs can make a huge difference in regaining confidence, navigating the world, and performing day-to-day activities.

On Episode 3 of the Between the Bones Podcast, host Adam talks with patient turned advocate Amy Remer.

Following her cancer diagnosis in 2017, Amy's care team was forced to undergo surgery where her left arm was amputated at the shoulder. Her insurance claim for a customized prosthetic arm after this amputation was denied, which left her without the ability to perform basic tasks like packing lunches for her kids.

From Amputation to Customized Prosthetic Arm

Amy recently received a donated custom robotic arm through the organization Arms for All. Amy now shares her story and gives back in several capacities by volunteering with The Victory Center and spreading hope as a motivational speaker and soon-to-be book author. On the latest Between the Bones episode, she shares her story from cancer diagnosis to customized prosthetic arm.

Why did Amy's arm need to be amputated?

In March of 2017, Amy Remer was diagnosed with stage three fibrosarcoma in her left upper arm. The cancer was discovered during a scan while she was pregnant with her fourth child. After the birth of her baby, doctors performed an MRI and discovered stage three sarcoma growing in the soft tissue of her arm. This discovery prompted Amy to undergo 12 weeks of chemotherapy and a radial resection of her deltoid muscle in the tissue around the cancerous area.

Post-radiation, Amy was cancer-free for two years from 2017 to 2019. In 2019, she had a recurrence of the sarcoma in the lymph nodes above her upper left armpit. More surgery and radiation were needed to remove the recurrence of cancer. A third biopsy was performed, which confirmed cancer had come back for the third time.

So, at the end of summer 2020, Amy's team met and concluded the best course of action was to perform a four-quarter amputation. This type of amputation removes the entire arm, shoulder, clavicle, and scapula.

Thoughts and fears before amputation

Amy always knew that amputation was a possibility when she was first diagnosed, and therefore had been reading articles and stories throughout her cancer treatment. After three and half years of radiation and surgery, she was to do what needed to be done to live:

Doing daily tasks like preparing kids' lunches and securing zippers had to be creatively reimagined post-amputation. Amy vowed to find a way to do all of the tasks she did before her arm amputation. Most all of these day-to-day activities had to be relearned, but Amy adopted a hopeful and dedicated attitude as an example to her four children.

Getting connected with Arms for All and OrthoCarolina

Amy Remer's connection to the Arms for All charity began 10 years ago when she met a woman at a former job. Though parting ways after the job ended, Amy and the friend stayed in touch through social media. When Amy began posting about her cancer journey and upcoming arm amputation, this friend from 10 years ago connected Amy with her cousin Tiffany, who had her arm amputated following a shark attack.

Tiffany and Amy became fast friends, bonded by their extremely rare and unique circumstances. Tiffany put Amy in touch with the OrthoCarolina surgeons in Charlotte, North Carolina. Amy did a one-hour video call and five days received a call that would change her life:

"I'm pulling in my driveway and I get a phone call, and it's Dr. Gaston on the other end. And he said, so we didn't even tell you this on your phone call, but we recently started an organization called Arms for All, and we have enough money for our first two recipients, and we want to give you an arm."

"It was fun because who gets to design an arm?"

Amy Remer designed a custom robotic arm with the surgeons and medical device experts at the OrthoCarolina clinics in North Carolina. The most important element of the prosthesis was the use of a functional hand. Amy understood that the prosthetic would never be a replica or replacement of the arm that was amputated but having an extra hand made a huge difference to improve the quality of her life.

Amy can control the opening and closing of the functional robotic hand on her prosthesis by contracting her pectoral muscles on her chest and trap muscles on her back. She is currently building confidence using the customized prosthetic arm in her day-to-day life while also sharing her story via her Facebook Page and upcoming book.

Amy Remer has had an extraordinary journey over the past five years, from cancer diagnosis to years-long radiation and surgery, to amputation, and the designing of a customized prosthetic arm. She provides hope and support to so many as an up-and-coming motivational speaker.

Between the Bones, powered by OrthoCarolina, explores adult & pediatric orthopedic conditions, life-changing research and the future of healthcare. Subscribe and listen to learn more about your skeleton and what goes into taking care of it.