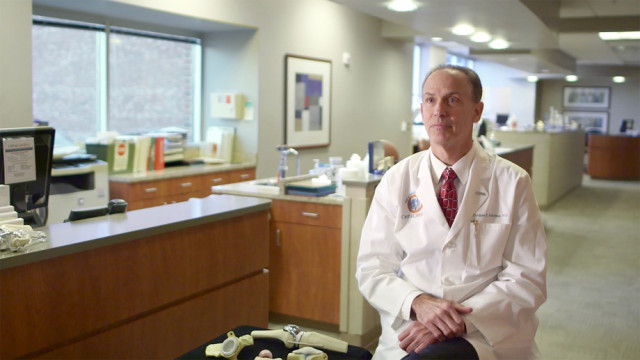 He spent an entire life with knee pain and swelling after activity or having a long day standing at work. It changed the choices he made, like biking instead of running to keep the swelling to a minimum. Then, after a Christmas party with a DJ and a dance floor, he couldn’t get the swelling under control, even after cortisone shots.

He was used to being in an exam room but not from the side of the patient. Dr. Thomas K. Fehring, a renowned hip and knee surgeon, holds patents as the inventor of remarkable prosthetic knee systems. He has been a visiting professor at Mayo Clinic, taught numerous courses to fellow orthopedic surgeons and has written book chapters on knee replacements.

As a surgeon, almost every day he operates it involves a total joint surgery. Now the doctor who was used to tackling everyone else’s problems had a problem of his own and it would require a bit of vulnerability on the road to recovery.

Dr. Fehring needed a knee replacement but that couldn’t happen with the infection in his knee. The irony here? Dr. Fehring was running a study to improve the process of total replacements in joints that are infected.

The current process requires two surgeries – one to remove the joint and put in a temporary prosthesis and another several months later to put in the permanent joint replacement. Until now, this was the necessary process for those with joint infections, but Dr. Fehring saw an opportunity for improvement.

Over the past few years, Dr. Fehring has served as the principal investigator of a study aimed at accessing a method that would eliminate the second surgery in the replacement of an infected joint, making the entire process possible to complete in just one day. Fourteen sites across the country are participating with 300 patients needed to achieve statistical power. Of the nearly 100 procedures that have been performed so far, more than half have been completed at OrthoCarolina.

Now, as a patient, Dr. Fehring would get the same two-step joint replacement he was so familiar with and so involved in studying. With tables turned, he became the patient of his OrthoCarolina Hip & Knee Center colleague, Dr. William L. Griffin.

During this time, Dr. Fehring received support from those who knew exactly what he was going through – his own joint replacement patients. A card he’s held onto reads:

“I hope you have gotten along well with your surgery and are recovering nicely. I am having difficulty in choosing the right words to thank you. I just wanted you to know how well I am getting along since you did both my hip surgeries. I feel so blessed to have had you as my surgeon.”
-Mary

The well-wishes did their best and today, several months post-surgery, Dr. Fehring reports he has recovered well. Even with great success and a highly skilled surgeon, Dr. Fehring understands how difficult the two-step process for replacing an infected joint can be and he says it makes his study even more exciting.

“I’m such a better doctor than I was now than six months ago,” he says. “Now I get it. I get the pain people go through. It’s been great in the exam room – I can say ‘I know just what you’re talking about.’ When someone tells you-you're going to have two operations over five to six months that affects you psychologically. It’s depressing.

PAVING THE ROAD TO RECOVERY

Another patient who had gone through the same procedure pointed Dr. Fehring towards an organization that provides peer-to-peer support for heart patients. Using his recovery time for good, Dr. Fehring joined his former patient and the two developed their own program for patients of the two-step joint replacement procedure. With three volunteers who serve as patient ambassadors, Healing Joints is a nonprofit supporting patients and their caregivers. Now rolling it out to his own patients, Dr. Fehring’s ultimate vision is to see it implemented across all 14 centers involved in the study.

After becoming a patient of the same surgery he’s working to improve, Dr. Fehring is even more passionate about the future and offering just one procedure for others who find themselves in the same situation.

“It I could have gotten it all done at one time that would have been great,” Dr. Fehring said. “Two hundred more patients to go!”

-The Insider's Guide to Knee Replacements - Did you know Dr. Thomas Fehring's son is also a hip and knee surgeon? Dr. Keith Fehring and Physician Assistant Jennifer Suckow take you through the different methods of knee replacements.

Dr Fehring, a great doctor my knee replacement by him made me a new person. Hope you are doing well.
- John Mc Connell
Reply From: OrthoCarolina

Thanks for the note John.

Dr. Frehing did both of my knee replacement surgeries. One in 2009 and the other in 2012. I have never had any problems with either one and recommend him to anyone who tells me they have knee issues. He is awesome. So glad he is recovering well from his surgery.
- Margaret McAlister
Reply From: OrthoCarolina

We think he is awesome too Margaret! Thanks.

Dr Fehring is the best and I am delighted to hear he is doing so well. He replaced both of my hips and a knee and I recommend him to everyone who asks which doctor did my surgeries. Thank you Dr Fehring for giving me a pain free life!
- Marsha Booth
Reply From: OrthoCarolina

Great to hear Marsha, thank you for the kind words.

You are in very good hands, Dr. Fering. Dr. Griffin replaced both my knees. One in 2003 and the other in 2009. I can do anything I want to do with just as much ease as my God given knees. I wish you well. I am so grateful for all the physicians at Ortho Carolina. Definitely the best!
- Sylvia Garrett
Reply From: OrthoCarolina

We appreciate it Sylvia, thank you.

Dr. Fehring did my hip replacement in November 2017. My next step is knee replacement and I wouldn't go to anyone else. He is the best and I am blessed to have him as my Dr. Hope everything is going well.
- Phyllis Webster
Reply From: OrthoCarolina

Thanks so much Phyllis!

His son did both my knee replacements, I could not have ask for better treatment, they both are outstanding surgeons. If I ever need another knee surgery, I would not go anywhere else. I think they are the best.
- Willa Eaton
Reply From: OrthoCarolina

Thanks Willa, we appreciate the kind words.

Dr. Griffin has done 4 of my 5 Hip Replacements. He is a Excellent Surgeon with Great bedside manner. I've been coming to OrthoCarolina for many many years. I wouldn't go anywhere else.
- John
Reply From: OrthoCarolina

Thank you for the note John.

Dr. Fehring did my 4th and hopefully final knee replacement on my same knee in October 2018. I was referred to him, due to my knee's previous complications. The recovery after this surgery has been much easier and my knee is stronger and definitely better. Looking forward to a life time with this new knee.
- cherri jutzi
Reply From: OrthoCarolina

We appreciate the comments Cherri, thank you.

I’ve always considered you the best, all the way back to the 1990’s. Heal well, I think of you often
- Beth Buckley
Reply From: OrthoCarolina

I have a 14 year old knee replacement that was done when I was 47 years old. I have had absolutely no problems with it at all. Still do step aerobics. Best life changing decision ever. Dr. Fehring is outstanding!
- Diane B.
Reply From: OrthoCarolina

Dr. Fehring replaced both my knees One is 17 years old and the other is right behind it .....very caring and patient advocate As a nursing instructor on orthopedics I knew who was the best......I love Dr Fehring and hope he taught his son well
- Donna Ferraro
Reply From: OrthoCarolina

Thank you so much for the kind words Donna.