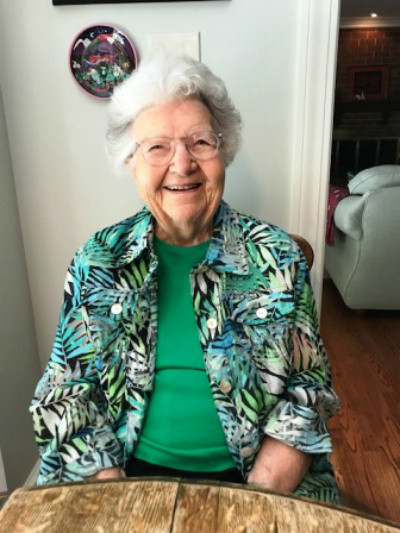 On June 20, 2017, Margaret turned 100 years old. She had a birthday party with family and friends, and the celebrations felt like they went on for a week. But she’s never been one to rest for long and always has something to do. Margaret was the first female in her family to graduate from college; Nazareth College in June 1939. When her husband John was deployed to the Pacific with the Navy in the early 1940s, she worked in an office and sent constant letters and photos using friends’ film rations.

She may be in triple digits now, but Margaret still walks and goes up and down stairs every day. Being in such good shape helps her be able to keep up with her sizable family, which includes two daughters, one son, eight grandchildren and so many great-grandchildren that it’s hard to keep track of them all. For her birthday celebration, extended family came from as far away as Indiana to help celebrate.

“And I love every minute of it!” exclaims Margaret.

Best Neighbor on the Block
About thirty years ago Margaret’s knee started giving her trouble, and she ended up needing a knee replacement. Her daughter’s neighbor Dr. Thomas Fehring just happened to specialize in joint replacements, so she decided he would be her surgeon.

Everything went well and Margaret continued with her busy lifestyle until about fifteen years later when her knee started feeling painful again. Dr. Fehring had come over to her house before in a snowstorm just to check on her knee, so she knew he would be able to help. When Margaret had her first joint replacement, the surgical technology wasn’t nearly as developed as it had become in recent years, and she knew her surgeon could put her on the road to recovery once again. It turned out that Margaret had been so active in her late 70s and early 80s that she had completely worn out the plastic component of her replacement between the metallic femur and metallic tibia. Dr. Fehring, who specializes in joint revision surgery, performed a successful knee revision arthroplasty on Margaret.

“Age isn’t criteria for surgery if you’re healthy otherwise,” says Fehring. “When she wore out the original replacement we fixed it and she did great. She worked hard on her therapy and didn’t let this get in the way of her life. The surgery enabled her to continue to be active and live independently.”

A Step Ahead
Dr. Fehring says that total joint replacements not only relieve pain but improve function and quality of life. They also help patients maintain independence, not having to rely on anyone for basic needs. If in the rare instance a total joint replacement wears out revision surgery is usually successful in the vast majority of patients, allowing them to return to an independent pain-free life style.

“I don’t know what would have happened if it hadn’t been for him,” says Margaret. “I wouldn’t be able to walk.”

Mobility is almost a breeze for Margaret, who says her knees never hurt or bother her. She loves to travel and has spent a great deal of time in Ireland and traveled to other areas of the globe. These days she travels shorter distances to Oak Island, Lake James and Rochester, NY with her family.

As for what she loves most about life, Margaret says, “I’m blessed with a great family. And I remind them all the time how blessed we all are, and to never take life for granted!”

Asked if she has advice for anyone considering a joint replacement, Margaret firmly says “When my knees got fixed, they got fixed. Life became so much better. Don’t put it off because you’re scared. Listen to and trust your doctor…I sure did!”

Ok...now Margaret is still part of our quilting group...As it happens, Dr. McCoy is my surgeon...I have had three surgeries in the past year...knee replacement, shoulder replacement and now recovering from hip replacement...I agree with my friend, Margaret...It is so worth the pain. And, it is so awesome to have a surgeon you can trust.
- Diane Muldoon