Sight By Side: How Para≈Guide is Making Their Mark on Charlotte 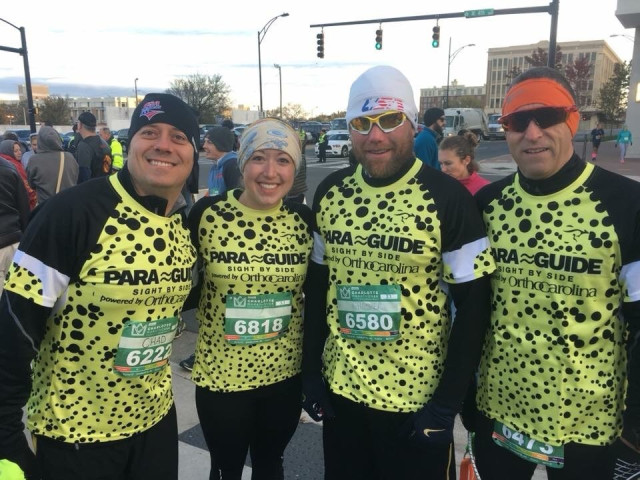 Imagine walking, running, swimming and cycling, all physically tied to another person. For the visually impaired, it’s the only way they can train.

Para≈Guide is a new local nonprofit with the mission to encourage and support visually impaired, multi-sport athletes to stay active. Shannon Houlihan is a triathlete originally from Houston who relocated to Charlotte. She began running and cycling with a local group in hopes of meeting new people and that’s exactly how she met Paul Harrold, another triathlete with the same passion to help people in their community.

After the initial success with their volunteer efforts, Paul and Shannon wanted to bring this idea to life and that’s when Para≈Guide officially came into existence. Currently, they are the only multisport organization in Charlotte that helps visually impaired athletes swim, cycle and run to make exercising and training as easy as possible. Their organization is quickly growing to support the visually impaired community in Charlotte and OrthoCarolina is proud to support their efforts.

Earlier this year, Paul and Shannon met Chester Triplet, a local cyclist who was honorably discharged from the Army due to the onset of Stargardt’s Disease, a degenerative eye condition that can lead to blindness. At the time, Chester had begun training for the 2020 Paralympics in cycling but he needed a guide to help him train. He was paired with Paul, they made a remarkable team and a friendship was born. Chester most recently received enough points for his UCI*certification for 2018 and he raced for a time trial in Colorado for the national Paralympics championship.

Para≈Guide also completed the Charlotte Marathon in November, running with 10 visually impaired people and a total of 60 runners under the Para≈Guide team name as the largest nonprofit team in the event. Since then, they’ve received positive feedback and promising inquiries. So what’s next? They plan to race with a full team at the BB&T corporate cup on March 10th, 2018. Paul says while he works full time as an IT consultant, Para≈Guide is his passion and with community support, he intends to see it grow to its full potential.

Most people don’t know that only a small amount of people are actually born blind. Blindness can be caused by genetic conditions but diabetes is actually the most common cause of vision loss and the leading cause of vision impairment and blindness among working-age adults. About one in five newly diagnosed Type 2 diabetics show signs of *diabetic retinopathy; after 15 years with diabetes that jumps to nearly 80 percent of Type 2.

*Diabetic retinopathy affects blood vessels in the light-sensitive tissue called the retina that lines the back of the eye.

Para≈Guide is currently working with the local Veterans’ Association (VA) to help the 400 visually impaired out of 9,000 veterans they serve in the greater Charlotte area. They range from 26-107 years old. Post-service, veterans are now being prescribed a custom-made tandem bike to help them stay active and minimize possible depression from losing their sight. Their goal is to have 30-40 percent of the VA group utilizing their services within the next year through organized ski expeditions, golf tournaments and swimming races.

How to Get Involved

Become a sighted guide through Para≈Guide by filling out the form here. Or, RSVP to shannon@paraguide.org for the next sighted guide training. They are always looking for volunteers to join their team.

Nordic Walking for a Full-Body Workout Five Exercises for the Swimming Athlete to Complete Out of the Water Why We Are Athletic Trainers How to Prepare for Race Training: Mobility Workouts, Warm-Ups & Cool Downs Outlasting the Spartan Race: An OT’s Top Tips The Hip, Getting Older and Running
View All Related