Journey into Becoming the Bionic Woman 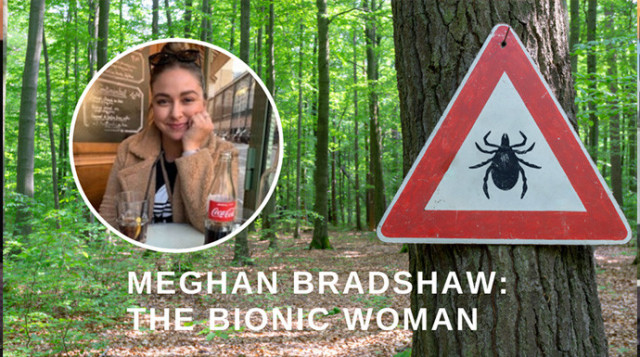 How does a perfectly healthy and active 28-year-old woman quickly change into a bionic woman in less than three years? For Meghan Bradshaw, this became her life. Growing up in New Jersey, Meghan had a happy and healthy upbringing and was a dancer and cheerleader before she attended college at UNC-Charlotte in the fall of 2012. After graduating in 2015, Meghan prepared to make the cross country move to Seattle, Washington to start a new job. However, the problems that came next, she never saw coming.

Meghan recalls it being “like a switch went off” in her body. She became overcome constantly by extreme fatigue, persistent ringing in her ears, and brain fog. Her life in an instant became completely debilitating. She started visiting as many doctors and specialists as she could, from her primary care to the emergency room and even sports medicine doctors, but no one had an answer. Her pain had moved from her knees to her ankles, hands, and shoulders and the only thing she was told to do was ice them and rest.

“It felt like I was in the body of an 85-year-old woman, but I was 23,” Meghan states in a recent interview.

The “Diagnosis” That Changed Her Life

Meghan had recently moved to Nashville when her body completely collapsed in 2017. Her mother had to move out with her as she could barely get out of her bed to walk to her bathroom. While she was in Nashville, she visited a Rheumatoid Arthritis (RA) doctor and was finally diagnosed with RA. Meghan was started on prednisone and low-dose chemo drugs to try and suppress her immune system. Though this helped her symptoms to improve over the next two years, she still knew that something was not correct. She referred to it as “almost like being like a Band-Aid.”

In 2019, Meghan finally got the real diagnosis that she had been needing to hear over the past few years. After visiting the Cleveland Clinic and having a CD57 test performed to see if there was a live disease present, the results came back positive for Lyme disease along with Babesia and Barytonesis.

The History of Lyme Disease

Lyme disease was originally discovered in the 1970s in Lyme, Connecticut when a group of children began having debilitating health issues after being bitten by a tick. Today, Lyme disease has over 500,000 new diagnoses each year. While it was a huge relief for her to find out that she had a diagnosis, what was to come were health concerns and surgeries that no one, especially in their 20s, should experience.

One of the most physically destructive parts of Lyme disease is the deterioration of joints. Every three to four months, Meghan goes in and has another joint replacement, and this is when she turned to OrthoCarolina. By May of 2022, Meghan had had seven surgeries to replace various joints. Dr. Durham Weeks III replaced her meniscus in October of 2017 before she had a bilateral hip replacement with Dr. John Masonis. Meghan referred to Dr. Weeks’ PA Jeff Dabkowski as “such a light in all of this” as he helped figure out the best steps for each surgery.

After she woke up from her bilateral hip replacement surgery, she felt the best that she had felt in years. She was clearheaded and knew that they were onto something. While she was still in the hospital, they called in a Lyme specialist to help her determine the next steps of her diagnosis, however, much to her disappointment there was nothing the specialist could do since her diagnosis was at such a late stage. The misdiagnosis of RA worsened the progression of her Lyme disease as treatment had been continually put off. She was told she would need long-term IV antibiotics and had a central line put in her chest in which her parents had to administer.

This central line helped with her inflammation and helped to keep her clear-headed, however, her joints were still messed up, so she returned to OrthoCarolina. In 2020, she had both of her shoulders replaced by Dr. Shadley Schiffern and for the next, three to four months after that she went in to have another joint replacement. Her joints became a domino effect with one after another needed to be replaced. Dr. Glen Gaston helped to fix both of her hands as they got fixed in a fist due to the deteriorating cartilage from arthritis.

After all these surgeries, her joints feel amazing, and she is so thankful for all the OrthoCarolina staff and doctors for making this process so smooth. Meghan was lucky enough to have all her procedures done at the Pineville location, making her care very accessible, which other people do not have.

While Meghan’s journey is long from over, she has continued to improve mentally and physically and feels immensely better thanks to her OrthoCarolina care. Within the next year, she will be breaking the record for the number of joint replacement surgeries she had at her age with 11 all in the past three years.

Giving Back as The Bionic Woman

Not only has Meghan helped to draft reports on neurological and neuropsychological parts of tickborne diseases but has been a living donor for the national research interchange biobank by donating three of her joints to research, she has also been a key partner for LymeTV and the Tick Jedi Coalition. She is currently in graduate school at UNC-Chapel Hill getting her master’s in Public Health to help others go through tough journeys, like hers. Throughout Meghan’s journey, she has been an amazing advocate for federal workgroups trying to bring awareness and research on tickborne illness.

All these partnerships offer tips for checking for ticks and keeping you and your family safe. This is especially relevant since Covid has encouraged everyone to get outside. Ticks can be as small as a poppy seed and are heading down south due to Climate change. Meghan wants to make a change in the tickborne illness community and preaches “If I can help one other person not go down the road I am in, then I did good.”

Here are some helpful sources for learning more about tickborne Illness:

Every doctor and Lyme disease patient should read THE INVISIBLE KINGDOM by Megan O'Rourke, which tells the history of the author's long, debilitating and mysterious illness and her frustrating but finally successful search for a diagnosis and cure. The author is a well-known poet and essayist and the editor of THE YALE REVIEW. This book was just published in 2022 and has received great reviews.
- Patricia Everhardus

Is it possible to find out what infectious disease doctor Meghan saw? Haven’t been able to find a good Lyme doctor in our area.
- AL
Reply From: OrthoCarolina

Hi AL, we reached out to Meghan and she shared that she recommends Dr. Ross Boyce at UNC! Hope that helps.

Reading Megan's story was very encouraging to me. I am so happy for her. Sometimes I refer to myself as the "Bionic Woman " because I've had major surgeries on my back done by Dr. Anthony Kwon, at Orthocarolina. The surgeons there are absolutely the best.
- Naomi Price

How awesome for her! The recoveries were not easy I’m sure since I’ve had bilateral knee and hip replacement but I know she must feel truly bionic!! Thank Gos for instilling the knowledge in these doctors to help her!! Well done everyone!!
- Barbara McPhee
Reply From: OrthoCarolina

We are so glad she got the right diagnosis and found some truly excellent surgeons to help her re-gain quality of life!

Love the story so much good information to read thank you for the story
- Edith SIMS
Reply From: OrthoCarolina

Thank you for reading, Edith! We hope you are well.

Encouraging.. Meghan just did not give in … She followed the voice inside her and the battle ahead did not defeat her future. I have had two joint replacements and two fusions.. it’s a battle these Doctors can get you through. Ticks loose !!!!
- LUKE COLLINS
Reply From: OrthoCarolina

Thank you for your comment. Meaghan is an absolute inspiration and we are grateful for the efforts she is putting in to advocate and bring awareness for Lyme Arthropathy.

What to Know About Exercising With Arthritis Exercising with Arthritis | Dr. Drew Henderson, Orthopedic Hip & Knee Surgeon A Beginner's Guide to Fly Fishing the Mountain Streams of the Blue Ridge Where to Go Skiing & Snowboarding in the Southeast Cycling in Charlotte 8 Reasons Charlotte is an Awesome City for Outdoor Lovers Eastern Slickrock Ride Asheville Experiencing the Biltmore Estate in Asheville
View All Related