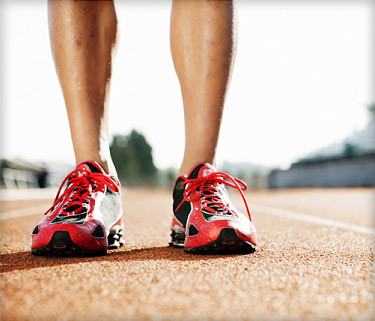 A lifelong athlete, Sarah Calhoun has always been into cross country and running, especially long distances. During her college years at Appalachian State University in Boone she was a regular on the slopes on her snowboard, and her passion for outdoor activity and different sports strengthened her running ability. By January 2015 when she turned 28, she’d just completed her second half marathon, was beating her high school 5K times, and had set a personal record of under 24:00 at the OrthoCarolina Classic and a personal record for her half marathon.

Sarah and her husband were snowboarding in January and about to disembark from the ski lift on the last run of the day when her husband accidentally slid into the back of her. Sarah fell, but her board stayed up. She felt her left fibula snap.

Emergency crews attached Sarah to a sled to take her down the mountain. She had broken the fibula, which would mean nearly nine weeks on crutches, a seemingly arduous physical and mental challenge for someone used to being so active.

I couldn’t feel from a few inches below the knee. I had no idea what was happening to me.

About a week and a half before she was to start physical therapy at OrthoCarolina Huntersville, Sarah noticed she had difficulty lifting her [other, uninjured] right foot to the point of tripping over it, and actually sprained her right ankle. She was then evaluated for the injury by Sarah Knoedler, a Physician Assistant who referred her to physical therapy with Sarha DoBroka and for diagnostic testing by Physiatrist Dr. Alex Chasnis. Once the location of the nerve compression was identified, Dr Scott Smith performed the successful surgery to relieve the pressure on the damaged nerve. In the early stages of rehabilitating her left fibula and wearing a boot on that leg, she now had to also wear a brace on her right foot. Dr. Chasnis and Sarah’s physical therapist at OrthoCarolina Huntersville, Sarah DoBroka, recommended an electromyography (EMG) for Sarah’s right leg, an electrodiagnostic medicine technique used to diagnose issues in skeletal muscles. Sarah’s results showed significant nerve damage in her fibular nerve at her knee was causing her foot drop; she had lost almost all sensation in her shin region and had minimal motor control to the point that she could barely lift her toes.

Just months ago she’d been in the best shape of her life. Now Sarah was dealing with a broken fibula one on foot, and severe nerve damage from drop foot in the other that would require surgery. To complicate her situation, she already had impending jaw surgery for a different issue.

Everything just fell apart at one time.

Sarah went ahead with her already-scheduled jaw surgery, where her upper teeth were cut out and her jaw moved forward. The following week she had nerve decompression surgery for the drop foot. Meanwhile, she was continuing physical therapy for her fibula injury on her other foot.

It was an all-time low for Sarah, but she was determined to recover. Post-surgeries, Sarah and her physical therapist Sarah [DoBroka] concentrated on healing both injuries quickly but carefully. They first worked through improving her ankle range of motion, decreasing swelling, gait training and progressing out of the boot on her left foot. Learning to walk again was difficult as she dealt with her drop foot issue and surgery recovery, but the decompression surgery helped to restore sensation and motor control. As she recovered her gait, balance and strength, she started wearing a sport-specific ankle foot orthosis (AFO) brace on the right foot that she would continue to wear as she transitioned into running.

Since April Sarah and Sarah have done intensive physical therapy together twice a week, eventually moving into progressive exercises designed to help her run again. Sarah Calhoun’s goal? To run in the 2015 OrthoCarolina Classic on Saturday, August 22, 2015, one of her favorite races.

“We are zeroed in on getting Sarah back to running. The OC Classic has been a good focal point for keeping her motivated in therapy. She’s currently jogging two to three-minute intervals, which I consider to be a huge success considering she was tripping over her feet less than three months ago.”
– Sarah DoBroka, Sarah Calhoun’s physical therapist

“It’s definitely a different mindset than I have had in the past. I just want to run [the race].”
– Sarah Calhoun, patient

On August 22, Sarah will run the 5K course in the OrthoCarolina Classic. Her physical therapist Sarah will be running with her every step of the way as she attempts to complete her first longer run since the onset of her triumvirate of injuries in January. The Sarahs say that whether they run the whole thing or walk some of it will be determined on race day, but their goal is to simply complete the race – and to finish it together.

Inspiring article...just had a cervical discectomy/fusion a week ago. Was sitting here feeling very sorry for myself because I can't run! (Yet?) Thank you for helping me step back, put things in perspective and be grateful that i no longer have the severe pain that I was experiencing. Thank you!
- CSC

Hi Sarah, I too had a horrible accident that caused me to have surgery on June 18, 2015. Dr. Majors and his staff has been amazing and encouraging. My therapist at the Sports Medicine Center, Matthew, Keith and Bruce has been my inspiration, from helping me to stand to my feet and learn to balance and walk again to patting me on the back when I get discouraged. I am 10 weeks in and doing well. Congratulations to you. Ortho Carolina is the place to be! Tara
- Tara Hunter-McKoy

sorry you have had to go through all of this, Sarah, but know you will glorify God through it! Prayers for a complete healing!
- Serena

Why Adults Need to be More Active 8 Tips to Strengthen Your Immune System Are You Underfueling? 7 Simple Habits for Highly Healthy Holidays Dive In: 11 Things to Know About Aquatic Therapy Margaret Hanna, PT OrthoCarolina Eastover Physical Therapy
View All Related