Ten Facts to Know About Scoliosis 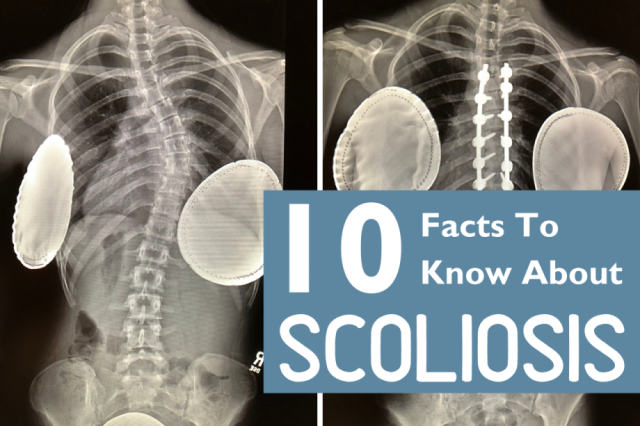 June is Scoliosis Awareness Month. Scoliosis, an Ancient Greek term for “bending,” affects 2 percent of the population. To learn more about the condition, Dr. Todd Chapman broke down some of the basics that you may not already know.

1.) Scoliosis is the curvature of the spine. When you’re looking at someone with scoliosis from the front, you can see that their spine curves like an S or a C.

2.) A patient is diagnosed with scoliosis when a spine curves greater than 10 degrees.

3.) The causes of scoliosis vary. It may be congenital or someone may just be predisposed to it. Most causes are idiopathic, meaning that the cause is unknown.

4.) It shows up earlier and later in life. In kids, it is seen around the ages of 8-12 and in adults, it usually appears around age 60.

5.) It can be diagnosed a few different ways. Most of the time, people with it are not displaying any symptoms, so the diagnosis has to be confirmed by X-rays.

6.) If scoliosis is severe, meaning the spine curves more than 60 degrees, it can affect lung and organ function. In addition, people with severe scoliosis can feel full faster and that can lead to malnutrition.

7.) Surgery is not always needed. In fact, it is preferred to treat it conservatively and with physical therapy.

9.) Kids and adults may receive different treatment. For kids, bracing is usually more effective because their spines are growing and can adapt. For adults, braces tend to not work as well and physical therapy is the mainstay of nonoperative treatment.

10.) Scoliosis is not a new discovery. It dates back to 400 BC when it was researched by Hippocrates!

WHAT'S NEXT:
- Scoliosis is often diagnosed in adolescents around puberty. In our ABCs of Orthopedics series, we tackle the question "Could my child have scoliosis?"

- It's always best to have an orthopedist address any concerns around scoliosis. Find a physician or OrthoCarolina location near you.

This article was originally published in June 2017 and updated June 2019.

I just found out a few years ago I have scoliosis.I was surprised because I was 60 yes old.Thanks for the info
- Daphne Ross

Thanks for the info. I have scoliosis, and appreciate all information from reliable sources that I can find.
- Judith
Reply From: OrthoCarolina