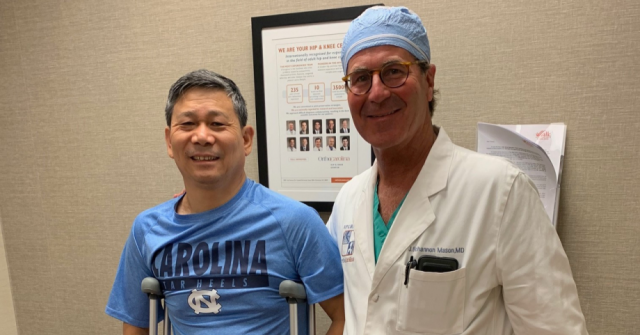 He’s one of the greatest leaders of modern-day religion in China.

For “Joshua”, a steady visionary whose patience, faith and calm demeanor have assured many Chinese Christians, offering abiding comfort in their shared beliefs comes naturally. It’s what he feels is right and what he feels he was born to do. He’s a quiet leader who demonstrates by example, firmly believing in the innate goodness of humankind. He hopes one day for a world united in peace.

He also heads one of the largest house church movements in China and has friends from across the globe that support and work alongside him in his ministry. Joshua is the name by which most of his American friends know him, but not his given name. Joshua has a lot of friends, but he also knows that not everyone appreciates his religious beliefs.

Leader of the People

House churches, also called underground churches, are Chinese Christian congregations stemming from the rapid urbanization of China over the past twenty years. Although Christianity in China is generally considered illegal, the religion as a movement has grown in popularity there during the last decades. According to Christianity Today, the swift growth of house churches is attributed in part to the 1989 Tiananmen Square fiasco that acted as an accelerator when students involved in the protest lost trust in a government they had believed would protect them.

Persecution of leaders and participants of Chinese Christian churches varies by region in China. Some house churches opt to operate legally by joining the state-sanctioned Three Self Patriotic Movement (TSPM). The remaining “unregistered” house churches are often in the path of peril, risking heavy government punishment. Joshua, whose house church movement isn’t considered legal, teaches his followers to love everyone, pray for their leaders and to live out their Christian faith as good citizens of China regardless of their circumstances.

Many years before Joshua would find himself at the helm of one of the largest religious movements in China, he grew up in this period highlighted by a battle for dominance. China’s Communist leader Mao Zedong wanted to protest the Chinese government and in 1966 launched what became known as the Cultural Revolution. It resulted in one of the deadliest famines in China’s history and was fraught with violent class struggles. Already living in poverty, his family found themselves boiling bark from trees for food. Joshua had severe bilateral hip dysplasia and his mother frequently carried him on her back.

“Family is so important to me, always,” says Joshua, who is married and has a daughter in her twenties. Because of his quiet demeanor, Joshua doesn’t speak in detail much about his childhood, but the Cultural Revolution was a difficult time for him.

Joshua was the only family member to survive the ordeal.

In Search of a Medical Miracle

Bilateral hip dysplasia like Joshua’s case often means there will be a need for total hip replacement at a young age. Joshua’s case as a child was worsened by the fact that he had it on both sides and developed ankylosing spondylitis, a rare condition that causes the ligaments in the spine to turn to bone. That meant that he had to deal with stiffness and fusion of the spine to the pelvis and very stiff joints because he had lost motion.

Joshua had both of his hips replaced in China as a young man, which served him reasonably well for a number of years. Because the medical care he received wasn’t as advanced where he lived or as it is present day, he has walked on crutches since the age of 18. He’s now in his 50s.

As he progressed into his 40s his replacements began to fail and, even on his crutches, he had excruciating pain with movement. His roles not only as a leader but also as a husband and father demanded a lot, and his body seemed to be failing him.

In 2016, Joshua had his left hip revised in China, a botched surgery that left him with a stiff hip that was an inch too short and permanent nerve damage to his left foot. Searching for a medical solution but trying to stay off the radar of the Chinese government was not only tough but terrifying – he could lose his life if they tracked him down.

He needed a medical miracle and finally turned to some American Christian friends who had a connection to Dr. J. Bohannon Mason with the OrthoCarolina Hip and Knee Center in Charlotte, North Carolina. Some tricky logistics and a flight halfway around the world later, Joshua was in the hands of Dr. Mason.

By the time he got to Dr. Mason, Joshua’s right hip was hurting from the loose and failing implant. He had suffered severe bone loss, making the pain on that side almost unbearable.

Despite cultural differences and a language barrier, patient and physician had an almost instant connection when they first met. That kind of unwavering trust is important in a physician-

patient relationship, particularly when a patient will undergo a procedure of such magnitude as Joshua’s.

“[Dr. Mason] has a great mixture of knowledge, leadership, goodness and humility, and is such a good person,” says Joshua. “I knew after meeting him that God had brought us together for a reason.”

Dr. Mason and his surgical team revised the hip with porous metal augmentation, a technique that replaces the lost bone in the pelvis. They also used a special type of acetabular cup that helped prevent his fused spine from causing the hip to dislocate. The surgery was technically demanding but, according to Dr. Mason, quite successful.

In August 2019 at the OrthoCarolina Hip and Knee Center, Joshua took his first unaided steps without a cane or crutches since he was 18 years old. Dr. Mason, Joshua’s wife and daughter, and several American friends were in the room. He was wearing a Carolina Tar Heels shirt. His first steps were momentous, yet gentle and meticulous, not unlike Joshua himself. Eventually, he should be able to walk free of pain on the side that plagued him for so long.

Joshua is back in China now. His steps aren’t perfect, but his work teaching people about God is his mission and not something he could walk away from. Instead, he now walks towards it.

- What is ankylosing spondylitis? Read more about the condition and learn how it affects a few rock musicians you might know.

- It's not uncommon for the physicians of the Hip & Knee Center to give back. Learn about how they performed 60 joint replacements in four days during a trip to Panama.

God is awesome. I am thankful that Joshua was able to receive such great service after so many years. Thanks you Dr. Mason and your team for such amazing witness and ministry.
- Ann

A true story of a miracle performed at OrthoCarolina that is so encouraging to read. Dr. Mason and his team were a God send to this gentleman. Thank you for sharing! Toni
- Toni Capell

Thank you for sharing! How wonderful for both Joshua and Dr Mason to be a part of changing lives! An inspiring story! God is in control! I am thankful for OrthoCarolina!
- Serena