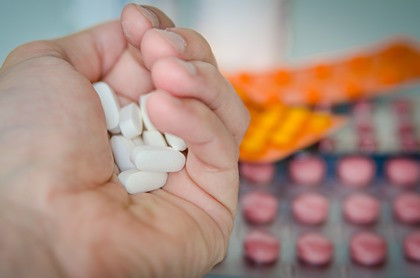 Opioid abuse statistics are staggering. More people die in the state of North Carolina of an accidental drug overdose, typically opioid-related than any other cause of accidental death. [1] Public awareness of the opioid epidemic in America has steadily grown over the past year through media attention. Little has been done to date within the medical community to specifically answer how to prevent future opioid abuse at the initial encounter.

A recent study performed at the OrthoCarolina Shoulder and Elbow Center on patients undergoing shoulder replacement surgery found that patients were safely and effectively treated with a novel, opioid-free pain management regimen when compared to patients that were treated with opioid medications. This pivotal study has laid the groundwork for future opportunities to offer patients effective alternatives to opioid medications.

In a recent interview, OrthoCarolina’s Nady Hamid, MD cites powerful data from the Center for Disease Control and Prevention: “In the United States, more patients are dying from substance abuse every year than from car accidents.”

North Carolina Attorney General Josh Stein has been vocal in his fight to combat the growing opioid epidemic in the state and is a supporter of the CORE Research Study. “Opioid painkillers are highly addictive; the CDC reports that one in five patients who take 10 days of opioids will still be taking them 12 months later,” he said. “And they are often not the most effective way to treat pain, as OrthoCarolina's preliminary findings suggest. I’m encouraged by OrthoCarolina's work to find non-addictive ways to treat pain, and I look forward to hearing about the results of its larger study.”

In support of the societally important and monumental endeavor of this timely study, The Duke Endowment has awarded OCRI with a multi-year research grant to help support this critical healthcare initiative. Based in Charlotte and established in 1924 by industrialist and philanthropist James B. Duke, The Duke Endowment is a private foundation that strengthens communities in North Carolina and South Carolina by nurturing children, promoting health, educating minds and enriching spirits. Since its founding, it has distributed more than $3.4 billion in grants. The Endowment shares a name with Duke University and Duke Energy, but all are separate organizations.

Had rotator cuff surgery, I was not in the study group and given Opioids, I took them prior to physical therapy but realized I was so sleepy during the therapy. Motrin worked just as good with ice pack. I utilized ice with Motrin. Yes, therapy is painful, I had chose a physical therapist that incorporated Myofascial release with therapy and this was a holistic approach for muscle tension/pain. Dr.. Schefferin and Katie his RN have addressed any questions through the patient portal and an advocate for what is best for me as an individual. Thank you for participating in the CORE project.
- Cynthia

I facilitate a local chronic pain support group. We would love to hear that the industry is finally realizing that narcotics aren't necessarily the answer. We would love to see more holistic methodologies accepted into the mainstream. Great work! Let us know if we can assist in any way.
- K. Oliver

Opioid free pain treatment sounds wonderful. I was prescribed 90 Percocets after my knee replacement. I only had 30 filled and still have 8 left, because I am very fearful of opioids. I used Tramadol some to limit the use of the Percocet as I take Tramadol for back problems. I try to limit that to 1 or 2 a day though. I would be thrilled if you came up with something other than these pills that would help my back pain.
- Sharon Ede

I think it is a great idea if it works. Not all people on opioids are susceptible to overdose or becoming addictive. I think it is up to the doctor to monitor and be able to tell when there is a problem. For the people that are in chronic pain all the time we have to learn to limit the use of pain meds but not feel afraid to ask your doctors for them when they are needed. When the day comes that chronic back pain can be treated with out pain killers please let me know. I have been on painkillers for 2 years off and on. I only take about 1 pill a day and only when needed. this makes me only have to have pain meds filled about every two to three months, this is not an addictive behavior and helps me be able to keep my job and continue to perform my everyday routine.
- Phyllis

I was in Dr. Hamid's study and had no opioids with my shoulder replacements. It is very satisfying to be able to control pain in other ways than opioids. Of course I had pain, but it was manageable and I felt like I was in control and not being controlled by a bottle of pills.
- Carole Pyle
Reply From: OrthoCarolina

Thank you for the support Carole.