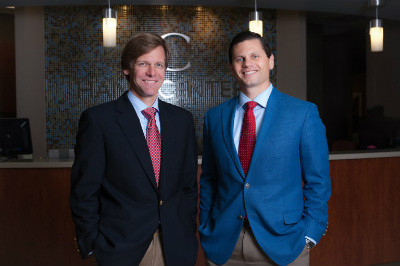 “We literally thought to ourselves, ‘We can do better than this. We can make this man’s life better.'” —Dr. Glenn Gaston

In 2014, Dr. Bryan Loeffler, now 38, a surgeon at OrthoCarolina, was presented with a case in which a patient had lost three of his fingers, leaving him with just his thumb and pointer finger. Surgery to reconnect the missing fingers failed and resulted in a prosthesis, which only allowed the patient, 41-year-old Timothy McCormick, to move all of his fingers together, rather than separately. “Dr. Loeffler and I sat there talking and thought, ‘Why do we not have a prosthesis that allows people to move each individual finger alone?’” says Dr. Glenn Gaston, 42, a fellow hand surgeon at OrthoCarolina. That epiphany led the doctors, along with the Hanger Clinic, to create the world’s first hand prosthesis that allows individual fingers to move independently. The move was groundbreaking in the world of upper extremity amputees, who often have fewer options for prostheses due to the complex movements of the hand and arms. Today, McCormick can hold a 20-pound dumbbell and pick a flower. “It’s the simple things we take for granted that now upper extremity amputees can do,” says Gaston.

My son was born with a paralyzed right arm from a traumatic birth. Brachial Plexus injury. Do you have anything innovative for a 41yr old that has a hard time with jobs.
- Andrea Smith