Football player beats the odds to get back to his team 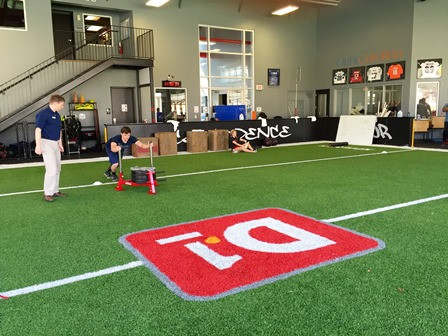 It was his sophomore season at Hickory Grove Christian School. Alec Parsons was playing defensive line and was a fast rising star on the football team.

In the second series of the game, Alec planted his foot solidly in the ground as he was being held by an offensive player. Suddenly, he was hit low by another player, as Alec pulled himself up, something was wrong.

His mom, Julie, could tell from the stands that something wasn’t right: “Alec got up and it was apparent he couldn’t use his left leg,” she said. Not only was it the worse pain Alec had ever felt, he worried it could be the last play he would ever play.

Alec tore almost all of the primary stabilizing ligaments in the knee – really only sparing the MCL on the inside part of the joint. Everything on the left side of his knee had to be reconstructed. In addition to this devastating damage to the knee, he had “foot drop” where he couldn’t walk without the support of a brace.

Dr. Dana Piasecki, a sports medicine surgeon at OrthoCarolina, prepared Alec for what would be a difficult surgery and long road to recovery. According to Piasecki, even after surgery, only 15 percent of athletes with these types of injuries are able to return to play at the same level of competition.

Alec moved bravely ahead. “I wasn’t nervous, surgery was my only option,” Alec says. “I was ready to get surgery, I understood it would take a long time to heal.”

The knee surgery went well, but as positive as Alec seemed, the recovery ahead, the pain, and time missed from school and sports hit him hard. “I had played football my entire life, it was where my friends were and it was really depressing that I couldn’t play anymore.”

Post-surgery, Alec began working on strengthening with Chris Gabriel, a physical therapist with OrthoCarolina. Chris had to be creative with his rehab exercises, since Alec still had to wear a brace and had limited mobility and strength.

“Alec had a very complex knee surgery but was one of the most determined players I’ve ever met, he stayed positive and followed the plan.” Alec’s desire to get back on the football field never wavered.

“Alec excels because he doesn’t allow allowed natural limits or injury to define what he does, he has the courage to push it”, mom Julie says.

Alec was making progress, but was still unable to lift his foot due to the “foot drop” injury he had suffered.

The procedure involved taking a redundant less important nerve and connecting it to a more important but damaged nerve. Once rewired the nerve could start working again and restore function.

The surgery was novel, but Dr. Gaston and Dr. Bryan Loeffler, both with OrthoCarolina Hand, believed Alec was an ideal candidate and jointly performed the nerve transfer surgery. Post-surgery Alec is slowly gaining movement back in his ankle. Dr. Gaston is pleased with his progress: “Alec can already walk without his brace; he has a lot of strength to gain but it’s very exciting.”

Alec’s mom Julie is equally optimistic. “We believe the nerve surgery is going to work and we will have complete healing a year from now.”

After his second surgery, Alec was finally at a point where he could control his future again. Chris encouraged Alec push physical therapy to the max over the summer months. Alec worked hard, with one to two therapy sessions every week and daily weight workouts and swimming.

“I knew I just had to get healthy,” Alec said. “I was tired of being hurt, so every day I worked hard. I made recovery a competition.”

Against all odds, Alec was able to get back on the football field at the beginning of the season. Alec was still wearing a brace and had to retrain himself on how to play his position due to changes in mobility. “I worked a year for this,” he said. “People thought when I got back I was going to be mostly moral support for the team, but I was ready to compete.”

It paid off. He competed so well, that Alec would go on to make All State for the season.

“Alec has tremendous heart and courage”, mom Julie said. “No matter what happens in life he won't just sit back.”