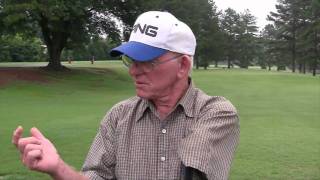 Freddy Clontz - retired industrial worker and avid golfer jokes around and tells us about life since losing his arm in an accident, and then later having to have a total shoulder replacement on his remaining arm. Orthopedic Surgeon Patrick Hayes talks about Freddy's case, and the benefits of shoulder replacement surgery. Freddy's golfing buddys tell about their favorite moments with the one-armed wonder on the links. Freddy's surgery was performed at Cleveland Regional Medical Center, part of the Cleveland County HealthCare System

One of the Most Common Knee Injuries: The ABCs of the ACL How to Choose the Right Athletic Shoes Taking Care of Collegiate Athletes OrthoCarolina Motorsports: Keeping you in the race OC on the Sidelines – How one Physician Assistant Keeps High School Athletes in the Game Cortisone Injections for Runners: Yea or Nay?
View All Related