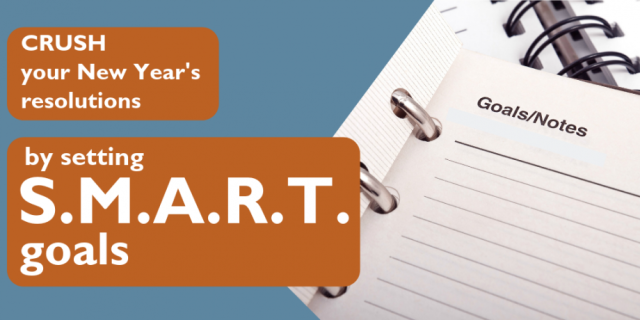 With a New Year, many of us have set goals in hopes of achieving better health, better finances, more time with our families, less stress, etc. With all good intentions of sticking to them, many goal-setters fail to see them through for any significant amount of time. This isn’t because they aren’t important goals or that they’re not valued enough, but rather because the goals haven’t included the SMART method.

Setting SMART goals can make the difference between failed New Year’s resolutions and real, lasting, behavioral changes. So, what is a SMART goal?

SMART is an acronym that stands for Specific, Measurable, Attainable, Relevant, and Timely.

Specific: The goal you are trying to achieve must be specific. Without specificity, general statements such as “I want to become more fit” don’t give a clear picture as to what you’ll need to do in achieving that goal. An example of a specific goal is “complete 30 minutes of exercise at least five times per week.”

Measurable: Your goal must be measurable so that it’s easy for you to see if you’re making progress or not. For example, a goal could be “I want to lose 10 pounds” versus “I want to lose weight,” which is not measurable.

Relevant: The goal should be relevant to your interests and abilities, and should be important to you. Finding your “why” for setting the goal can help you stick to it. For example: ”My goal is to lose 15 pounds within three months for my wedding” adds relevancy and importance.

Timely: The goal must have a deadline or an estimated timeline for completion. Giving yourself a timeline helps creates a sense of urgency to complete the goal. You also want to make sure that your goal isn’t set too far out. If you set a goal to lose five pounds in three months, you’ll likely put it off knowing that you have time to spare. Instead, set your goal to lose those five pounds in one month and plan to safely lose ~one pound per week.
Once you have your SMART goals set, it’s all about following through. Be consistent, be accountable to yourself, and you will see results.

Janelle Penatzer is a Wellness Specialist with the OrthoCarolina Wellness Center. She graduated from Penn State with a degree in Kinesiology-Movement Science. She has been working in Corporate Wellness for more than seven years. Janelle is an ACE certified Personal Trainer.

Thanks, My wife and I joined the "Y" yesterday and start our Get Healthy program tomorrow. Can't wait for our end of Month check in..
- Randall Wingfield

Janelle, thank you for these important guidelines, once which I will try to incorporate for 2091. Have a great, safe. meaningful and enjoyable Christmas and holiday season.
- Randy Brantley

Training Tips for New Runners Toe Up, Toe Off: How Important is Footstrike in Running? Do you get back pain from sitting at your desk? #TheFreeWorkout: Now in Fort Mill and Rock Hill Running Race Etiquette Outdoor Yoga: 4 Tips for Success
View All Related