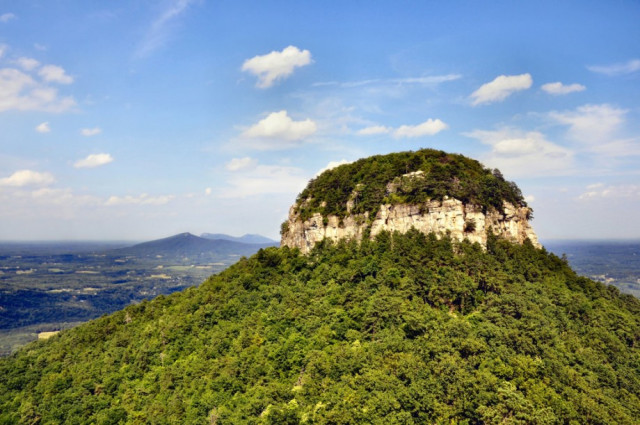 Pilot Mountain rises boldly out of the gently rolling North Carolina hills, a rocky anomaly that appears to have lost its way when the Appalachians came into being. An anticipated landmark of vacationers headed from the midwest to Myrtle Beach and coastal points south, Pilot has guided centuries of travelers, from nomadic Native American tribes seeking food and shelter along the Yadkin River to Moravian immigrants establishing a new home in the Carolina backcountry.

A visit to Pilot Mountain State Park is a journey through the rich geologic and cultural history of the Piedmont Triad. From above, the 3,700-acre park resembles a jump rope, with mountain and river sections connected by a narrow corridor trail. Adjacent to the park sits the 113-acre Horne Creek Farm, a historic site that’s like stepping back to 1910 when family farms dominated the landscape.

One of four peaks in the Saura Mountain range, Pilot’s pure quartzite capstone resists the eroding forces of wind and water to loom 1,400 feet above the valley floor. Its distinctive rocky knob rises 200 feet from a forested base. This monadnock, or mountain away from mountains, lies 20 miles south of the Blue Ridge and is more similar to the mountains of southwest Virginia than the land surrounding it.

If you hike the 3-mile Grindstone Trail to Little Pinnacle Overlook, you get a close-up, eye-level view of Pilot’s knob. Imagine a time when elk and mountain lions roamed the forests below, while flocks of passenger pigeons filled the skies. The Donnaha, a hunter-gather culture inhabiting the region 1,300 years ago, lived on these native species while growing maize and squash in the fertile bottomlands. Like the nomadic Saura Indians who came after them, the Donnaha used fire to increase biodiversity and improve food sources for native animals. Burns opened the forest canopy, increasing blueberry and huckleberry production and encouraging the growth of flowering plants for pollinators.

On your descent, take the Mountain and Corridor trails a little more than 10 miles to the Yadkin River. You’ll arrive at Bean Shoals and a section of the river used by the Donnaha people for fishing. A number of fishing weirs provide evidence of their efforts to catch the plentiful shad that migrated upriver from the ocean to breed before dams made migration impossible.

In the early 1800s, the Yadkin Navigation Company attempted to construct a 3-mile canal around Bean Shoals. Massive stone retaining walls line the riverbank here, yet the company mysteriously abandoned the project in 1825. This was also the site of the Shoals Ferry and a railroad depot, making the river crossing a hub of commerce in the late 1800s. Explore the park’s 2.5-mile riverfront by canoe or kayak along the Yadkin River Canoe Trail. The park riverfront is one of the most scenic sections along the 165-mile trail.

The year 1751 brought about the first formal effort to map the region by none other than Thomas Jefferson’s father, Peter. Next came an influx of European settlers in search of fertile and available land. German Moravians traveled along the Great Wagon Road, a former Native American trading path stretching from Pennsylvania to the Carolinas. Moravian journals document Pilot Mountain’s distinctive knob marking entry into the Carolina backcountry. Remains of Bethabara, the first Moravian settlement, are now part of Historic Bethabara Park in nearby Winston-Salem.

The 1800s brought continued growth to the valleys surrounding Pilot, with corn, tobacco, and orchard crops leading agricultural production in the region. Horne Creek Farm preserves the region’s agricultural heritage through hands-on tours and live demonstrations. German immigrant John Hauser purchased the original 100 acres of land in 1830, passing the farm on to future generations as it grew to 450 acres, with grain crops, tobacco, a cannery, and orchards of apples, pears, peaches, plums, and cherries.

The three-bedroom family homestead has been painstakingly restored to match original paint colors and furnishings. Goats, sheep, chickens, a donkey, and even two Bluetick Hounds inhabit the barn and surrounding pastures just like they did in the 1800s. Kitchen and outbuildings are fully functional, including a simple yet effective dry house for dehydrating fruit harvested in the orchards. Visitors are encouraged to explore with all five senses: play the family organ in the parlor, sit at the dining table, and draw water from the well. As you hike along the Yadkin River from Bean Shoals to the farm on the 2.5-mile Horne Creek Trail, imagine the Hausers trading goods with their neighbors across the river in the bustling town of East Bend.

Each fall, Horne Creek’s annual Corn Shucking Frolic draws thousands of visitors to the farm for live mountain music, woodworking, quilting, wood stove cooking, blacksmithing, children’s games, and, of course, corn shucking. Chicken stew, fried apple pies, and ham and biscuits are some of the home-made specialties prepared on site in the farmhouse kitchen. When you visit, be sure to sample the sonkers, a local specialty that combines juicy cobbler with soft-crusted deep dish pie for a plate of pure southern comfort.

From Tourist Attraction to Public Park

Prior to establishment of the state park in 1968, Pilot Mountain was a commercial tourist attraction, with private owners charging admission for access. The 2-mile drive cost 50 cents, while a quarter would buy you the opportunity to climb a wooden staircase to the summit. A grassroots effort by local residents and conservation-minded property owners led to the establishment of the state park. Next year, in celebration of the park’s 50th anniversary, officials will break ground on a new visitor center at the base of the mountain. The new facility will increase parking and include shuttle service to the top to mitigate weekend and holiday gridlock along the park’s only entrance road.

With more than 200 members, the nonprofit Friends of Sauratown Mountains supports preservation efforts with trail maintenance, local and state advocacy, habitat restoration, fundraising, special events, and publicity. For a full appreciation of the group’s efforts, hike the 6.6-mile Pilot Creek Trail. The park’s newest trail was built entirely by volunteers and offset $75,000 in equipment and labor expenses.

5 Top Fall Camping Spots in North Carolina A Family Guide to the NC Kids in Parks Program 4 Frozen Waterfalls To Explore in Western Carolina this Winter On the Water in Gaston County How Short Workouts Can Be Beneficial Paddling Through History: A Weekend on the Daniel Boone Heritage Canoe Trail
View All Related