The Hip, Getting Older and Running 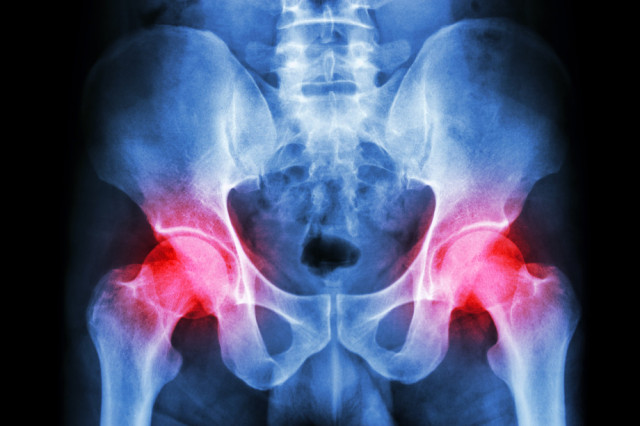 The hip joint represents an important connecting point between the lower extremity and the trunk. In activities such as walking, running, hopping and jumping the hip joint is able to resist forces far above the weight of the body and at the same time allow considerable mobility during those activities. The hip is a special type of ball-and-socket joint and is the second-largest joint in the body (the knee is the largest).

The hip joint is the one that is most often discussed as people get older because it is often afflicted with arthritis of aging. It is a misconception that exercise such as running and walking is detrimental to your joints. There is no evidence to support this belief. Frankly, it is simply a myth that you can “wear down” your knees and hips from average levels of exercise. Rather, the evidence points to exercise as having a positive impact on your joints if you exercise enough to lose weight or at least maintain your ideal body weight and you can reduce your risk of developing hip and knee osteoarthritis.

Due to its inexpensive nature, accessibility, and perceived health benefits, running is one of the most popular recreational and competitive exercise activities in the United States, and its popularity is growing. A study published in 2013 by Williams demonstrated that running actually reduces the risk of osteoarthritis development and hip replacement surgery risk.

So the important point is to stay active, keep your hips moving and when starting an exercise program start slowly and be consistent.

Reference: Williams, P.T. (2013). Effects of running and walking on osteoarthritis and hip replacement risk. Medicine and Science in Sports and Exercise, 45(7), 1292-7.

Chris, I was amazed to see your name on this! Good piece of work and great points to keep in mind. I'm doing well, thankfully, with both shoulders full ROM! Yea, and thanks to you!!! I'm still working Thursdays at Mitey Riders getting my mental therapy with the horses. If you have it free, come out Sat., May 3 to watch some of our kids ride. It's the Spring Festival with lots of food and fun 9-2. I'll be working barn, but I can get some time free with pre-planning. Mom is doing as good as can be expected - she's just aging faster than I would like, but, my goodness - she's 84 and can be slow and a bit confused if she wants to...LOL Virginia is wonderful with her "new knee". She had the ACL/PCL surgery about 2 years ago and has recovered well. She's riding balanced now and her knee is stable. She has work that should be done on the right but she's holding off on that. She is running a boarding facility and teaches riding - is happy and in a new relationship which is much more to everyone's liking. So it goes. I hope you are doing well and enjoying your new challenges. I have a friend in PT for rotator cuff/bicep repair. I keep telling her she needs to come see you in stead of the Ballantyne location. Take care and Happy Easter!
- Martha Branden - mandm4@gmail.com
Reply From: OrthoCarolina