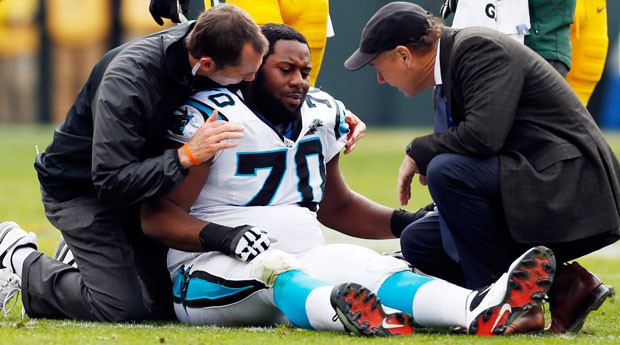 On any NFL playing field, the laser-like focus of teams matched against the decibel levels of a roaring crowd breeds an intensity that’s hard to rival. It’s a fierce atmosphere - one where players may only be able to see their immediate periphery but can feel their opponent everywhere. Stakes are high in these games, and so is risk.

Dr. Patrick Connor, team physician for the Carolina Panthers for the past 18 years, will be the first to tell you that risk is inherent to the game of football. He authored a recent study showing that nine percent of NFL players injure their ACL – the anterior cruciate ligament – within two years of getting drafted. Football is really a collision sport, rather than simply a contact sport. Given the sheer amounts of physical energy and force that accompany football, injuries can be far worse for NFL athletes than athletes in different sports.

At any Panthers game, you’ll find Dr. Connor watching intently on the sideline… because a player can sustain an injury in just seconds. Connor takes a team approach to healthcare, focusing on the best options for the players both short and long term. He works closely with the Carolina Panthers athletic training staff as well as other consultants within OrthoCarolina to coordinate players’ rehabilitation and care.

For as busy as his role with the Panthers keeps him, Dr. Connor actually spends most of his time at the OrthoCarolina’s Sports Medicine Center, seeing patients of all ages, in particular for shoulder, knee and elbow issues.

In Dr. Connor’s own words, here are 10 things to know about being a physician to an NFL team:

Dr. Patrick Connor is a sports medicine surgeon with OrthoCarolina and serves as head team physician to the Carolina Panthers, Charlotte Knights, Joe Gibbs Racing and Providence Day School. He was named a Charlotte Top Doctor in 2014 by the Charlotte Business Journal and Charlotte Magazine, as well as a North Carolina Top Doctor in 2015 by Business NC Magazine. Dr. Connor specializes in sports medicine, arthroscopic and reconstructive knee surgery, and shoulder and elbow surgery.

THIS WAS WOUNDERFUL NEWS THANK YOU BECASE OF YOU I AM GOING TO BECOME A WOUNDERFUL NFL DOCTOR.
- MARRISSA
Reply From: OrthoCarolina

We love to hear it Marrissa!

What is Frozen Shoulder? Athlete Learns a Focus on Self-Care and Mindfulness Pave the Road to Recovery OrthoCarolina Motorsports: Keeping you in the race ​How to Know If You Might Have a Rotator Cuff Issue Shoulder Impingement: What It Is and How to Fix It How recovering from an ACL tear is as much mental as it is physical: Warren’s Story
View All Related