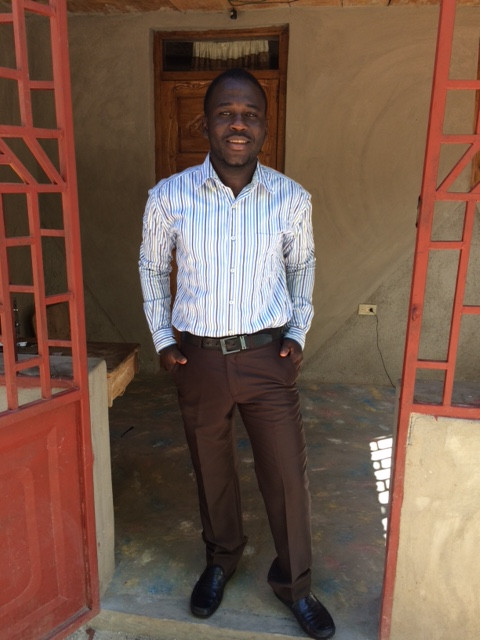 Pierre Wander Alcicat is a 25 year old who lives in the Haitian village of Cathor and attends the Organization for the Christian Force in Bayonnais (OFCB) School. Until several years ago, he had lived with a debilitating knee issue for more than seven years simply because he did not have access to the proper care.

The Bayonnais River Valley lies in the remote mountains of the Artibonite Region of central Northern Haiti and has a population of about 70,000 people, mostly subsistence farmers. Bayonnais has little infrastructure which means almost no access to services for its population. The Organization for the Christian Force in Bayonnais (OFCB), a local Haitian-based nonprofit, has operated a school in the region for nearly 27 years, providing students living in Bayonnais with the opportunity for an education and a meal each school day.

“When I was 12, my mother had a donkey, and one day I rode the donkey to the mountain and fell off and badly hurt my knee. My family has 10 children, and my mother could not pay for me to visit a doctor in Haiti. I sat in the house. I could not go anywhere because of my situation. For seven years, I got around on crutches.”

Dr. Pressly Gilbert, an OrthoCarolina surgeon in Bayonnais on a mission trip with Friends of OFCB, a Charlotte based charity, saw Pierre one day when Pierre walked home from school on his crutches. At that time, he was around 19, and Pierre’s knee had been swollen for many years. Dr. Gilbert helped Pierre get new X-rays of his knee.

“My knee was so big it looked like a watermelon. Pastor Kevin (Rev. Kevin Wright of Myers Park United Methodist Church) was in charge and he gave me money to visit some other doctors in Haiti but they could not do anything for my situation. I had X-rays and had a severely degenerated knee. My knee was still getting worse; so bad I couldn’t go to school. They told me they were going to bring me to the U.S. to get help and get the surgery I needed. ‘Dr. Pressly’ arranged the surgery with Dr. Fehring and OrthoCarolina.”

Rev. Wright arranged for Pierre’s transport to the United States and met him in Miami to deliver him safely to Charlotte. Through Friends of OFCB, Pierre lived with Mr. and Mrs. Thold Gill, a Charlotte family, while undergoing his medical care. The Presbyterian Orthopaedic Hospital generously provided free hospital care for Pierre.

“I lived with a family I didn’t know but I felt that they were my family. They were so kind to me. I had my first surgery, which was cleaning inside my knee. There was a lot of liquid in my knee that had to come out, because before I came to the U.S. I had been infected by tuberculosis. They treated the tuberculosis, which was only in my knee. A machine took all of the liquid out of my knee to make it dry. My second surgery was a skin graft. My third surgery was having 23 screws put inside my knee, though I will never again be able to bend the knee as it is now fused. I thank God for that though because he brought this solution for my leg and these doctors to me.”

The tuberculosis infection had destroyed the joint surfaces in Pierre’s knee. Dr. Thomas Fehring, OrthoCarolina Hip & Knee surgeon, inserted a plate connecting the tibia and femur that allowed the two bones to grow together and become one bone. Pierre was placed in a cast following his surgery. He stayed in Charlotte for six months while he recovered, underwent physical therapy and was treated for his TB. While in Charlotte he made a number of friends in the large Haitian community. Those Haitian friends collected money on Pierre’s behalf, and when he returned to Haiti, Pierre was able to buy a piece of land to farm, build a house, and move his family into. His English skills, acquired during his time in the United States, are helping to support him and his family.

“I am strong now because of those in North Carolina who fed me well, and I will never forget them in my prayers. I thank all the doctors, and nurses, and people who cared for me.”

Pierre will finish his final year of high school in 2017.

It is a wonderful feeling to know that there are still doctors and people in this world full of pain who care, this story brought tears to my eyes as we have it all in this country but have no idea what a little can do for those out there in other countries who do not have the luck we have. To all the doctors, nurses, pastors, families, christian families and all the wonderfull people involve in giving this family hope and a future i simply want to say thank you and God bless you so you can do more.
- Essenam Akue

What a beautiful story!!! Kudos to OFCB, Dr. Gilbert, Rev. Wright. the Gill family and Presbyterian Hospital for their compassion and generosity. How wonderful that Pierre and his family can now look forward to a brighter future thanks to all of you!
- Eileen McElroy

I wouldn't go anywhere else. Right now I am recovering from left knee replacement surgery. The right one was done in 1999 and still going strong. The doctors there are fantastic.
- Nancy

A Tale of Two Surgeons: Father and Son, Working Side by Side Dr. Todd Chapman discussing his practice Cortisone and Healing - An overview of the science Amazing Story: One Armed Golfer Don’t Be Afraid to Be the Guy in Yoga Class Cortisone Basics: The Lowdown from the Expert - Dr. Hamid
View All Related