Paddling Through History: A Weekend on the Daniel Boone Heritage Canoe Trail

Our Blogs Outdoors Adventures Paddling Through History: A Weekend on the Daniel Boone Heritage Canoe Trail
News Room Our Blogs 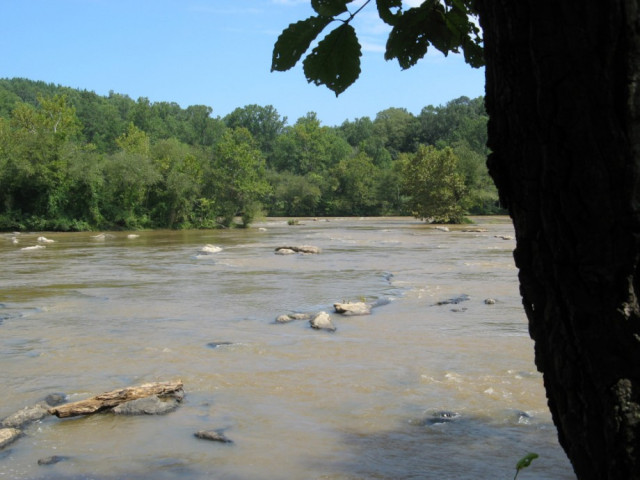 While North Carolina offers endless options for river paddling, one trip stands out as both a journey through the state’s rich history and pure backcountry adventure. Less than an hour’s drive from downtown Winston-Salem, you can immerse yourself in legend and folklore on the 22-mile Daniel Boone Heritage Canoe Trail. During the journey, you’ll paddle past the remnants of early settlements and commerce, criss-crossing a former Native American trading path to experience the region much as it appeared to Daniel Boone and his family when they arrived in the Carolinas in 1750.

Ease your boat into the wide and rocky Yadkin River and imagine yourself back in the mid-1700s, joining an influx of settlers arriving to farm the fertile Yadkin River valley. While no tangible evidence supports the tales of Daniel Boone’s explorations along the Yadkin, his family’s presence is known by property records, personal accounts handed down from generation to generation, and family namesakes like Boone’s Cave, Boone’s Spring, and Boone’s Ford that still exist today.

From the blueway put-in off Highway 64 in Lexington to trail’s end at the York Hill access in Linwood, a series of 10 cairns in and along the river mark historically significant sites,

painting a picture of 18th Century life on the Yadkin. Less than a mile from the put-in, a class II rapid runs over Swicegood’s Mill and the remains of a stone structure built by the U.S. Army Corp of Engineers in the 1800s in an unsuccessful attempt to establish steamboat navigation. Next, you’ll reach cairn 2, which marks one of two ferry crossings that fueled the tobacco-dependent agricultural economy of the time. (Cairn 8 marks the other ferry crossing.)

Cairn 3 sits in the middle of the river, marking Daniel Boone’s legendary fishing hole and Boone’s Shoal/Big Rock Rapid. The class I riffles are an easy challenge when the river’s running high, but can require a 20- to 30-yard portage in dry conditions. Farther down, you’ll reach cairn 7 at Boone’s Ford, which marks the infamous Indian Trading Road first mapped throughout the region in 1733.

Cairns 9 and 10 mark the trail’s entry into the upper reaches of High Rock Lake. At this location, the hydroelectric reservoir is surrounded by bluffs and bottomland forest. Just upriver from the York Hill take-out are the remains of Beard’s Bridge, built in 1818 as a toll bridge and the region’s first fixed-crossing of the Yadkin.

A downloadable trail map provides the narrative for each cairn and is a dry bag essential. Faster flow and more frequent rapids greet paddlers navigating the upper half of the trail, making the paddle from Highway 64 to Boone’s Cave Park a six- to seven-hour, relatively easy float. The paddle from the park to the York Hill access takes about the same amount of time but requires almost constant paddling due to reduced current along this stretch.

Cairn 6 marks the take-out point for overnight camping at Boone’s Cave Park. When you arrive, hug the eastern riverbank to disembark at Baptism Rock, a wide, flat boulder that’s guided many a river traveler over the centuries.

Secure your boats near the river and make the 90-foot climb to the park shelter along a well-marked trail. Two camping options await you: semi-primitive camping off the park’s main road, with eight tent pads, potable water, and restrooms; and primitive camping, with four pads off the Wildflower Trail near the ranger’s cabin. Be prepared to pack in all gear, including water, at primitive sites, and be aware that advance reservations and a small fee are required.

Arrive early or linger the next morning to enjoy the highlights of this remote county park. One hundred acres of mixed hardwood forest is home to three dozen species of native wildflowers, 7 miles of hiking trails, and the state’s largest Eastern Cottonwood tree. Topping out at more than 170 feet with a trunk 18 feet around, this champion specimen shines in spring when flower capsules pop, showering the park in cottonwood snow. Migratory birds, raccoons, deer, wild turkey, snakes, and other amphibians are common sites along the trails.

Most notable is the park’s namesake cave, which is believed to have served as home base for 25 members of the Boone family during their first year in the region. Also called the Devil’s Den, the cave is rumored to have provided shelter while the Boone family built log cabins and established crops nearby.

If you need to rent a canoe or kayak, reserve ahead at High Rock Outfitters in downtown Lexington. They offer canoes, kayaks, paddles, and PFDs, and are a great source of local intel on paddling the blueway. There’s no local shuttle service, so plan a car drop at the York Hill access before launching from Highway 64. An alternative half-day paddle from Highway 64 to the Concord Church public access in Mocksville gives you about three hours on the water and plenty of time to sample the local cuisine.

Lexington, the self-proclaimed swine & dine capital, is home to 15 barbecue joints. Hit family-owned The Barbecue Center on Main St. or Lexington Barbecue on Highway 64 to fill up on smoky, slow-roasted goodness with a side of slaw and sweet tea. Childress Vineyards, the largest vineyard in the Yadkin Valley, offers tours and tastings with a hint of NASCAR flair. Check out the Bull City Ciderworks taproom for gluten-free hard cider in inventive flavors like black tea, ginger, cherry, bacon, and hibiscus.

How to Tackle a Long-Distance Hike in Winter 20+ Family-Friendly Fall Adventures in North Carolina’s Triad and Triangle Family Weekend Getaway in Greenville, SC Top National Park Day Hikes From Charlotte 10 Unique Ways to Get Outside in Charlotte This Spring