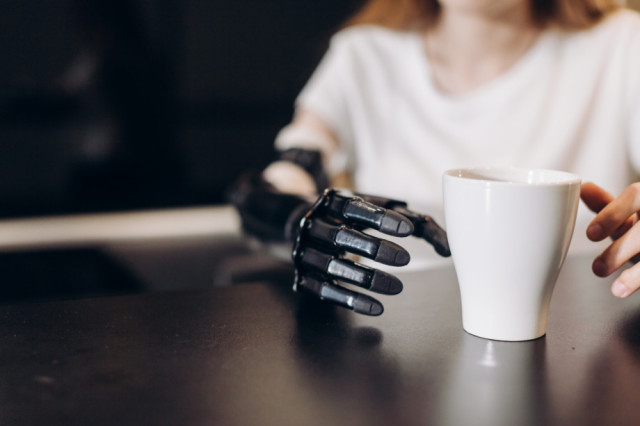 Three Charlotte hand surgeons have discovered that people of any age born without a hand already have the functionality needed to control a prosthetic device using only their mind. The breakthrough research, led by Drs. Michael Gart , Bryan Loeffler and Glenn Gaston, hand surgeons at OrthoCarolina in conjunction with Brian Kaluf, a prosthetist from Ability Clinic, studied children and adults born without a hand to see whether surgery would be required to control a myoelectric prosthetic hand. The study concluded that despite missing a limb for the patients’ entire lives, the upper extremities in both children and adults could reliably reproduce unique muscle contraction patterns that correspond to a variety of wrist and hand movements.  This could allow them to use their brains to control a prosthetic hand.

“In layman’s terms, we wanted to find out if the human brain can command a hand that was never there in the first place to do specific tasks, and if that ability varies between childhood and adulthood,” said Dr. Gart, who underwent his fellowship training in hand surgery at OrthoCarolina. “We found that patients of all ages born without a hand can be highly functional with a myoelectric prosthetic hand, and don’t require surgery.”

Patients who took part in the research underwent testing on a digitized virtual reality unit to measure the performance of both their regularly developed arm as well as the side missing a hand. This system is also used by OrthoCarolina occupational therapists to train traumatic amputees to use prostheses. As patients focused on thinking about moving their hands or moving the limb in the place where a hand would be, the system tracked multiple degrees of freedom, or the ability to move the hands in different positions in space. Sensors placed along the forearms to detect muscle activity determined how accurately each limb could reproduce prosthetic hand movements.

“We asked the patients to open and close their hands, move their wrists, place their hands palm up and palm down, and the computer-graded them on how successfully they managed different tasks on each side,” said Glenn Gaston MD. “In fact, one of the most amazing parts of the study was that not only could all of the children control the prosthetic hand on the limb missing a hand, but almost all of them performed better on the side missing a hand than on the normal side.”

Targeted Muscle Reinnervation (TMR) surgery, extensively performed and researched at   OrthoCarolina, transplants nerves and allows them to reinnervate, or grow into, another muscle. Generally used on traumatic amputees whose nerves continue to grow after amputation and seek a muscle to grow into, TMR helps with pain control and improves the ability for traumatic amputees to be able to control a prosthesis with their mind.

“When we embarked on this study, we wanted to find out if children and adults born without a hand need to have TMR surgery in order to operate a prosthetic hand like the traumatic amputees we frequently take care of,” said Loeffler. “Ultimately what the research showed was that this population does not require TMR since these individuals already possess the ability to control a myoelectric prosthesis. This is wonderful news for people born without a hand.”

The preliminary data for the study was presented at a regional extremity conference in 2018 where it won first place in fellow research and will be presented as a podium presentation at the American Society for Surgery of the Hand meeting in 2019. The research has also been featured at a number of prosthetics meetings.

Beyond amputee research and surgery, the surgeons lead the OrthoCarolina Reconstructive Center for Lost Limbs, a multidisciplinary clinic intended to help upper extremity amputees by offering patients the latest surgical innovations and technology to help them restore maximum limb performance and live life to the fullest. The clinic coordinates with local and regional prosthetists and utilizes the most advanced myoelectric prostheses available. They are also leading experts in other advanced nerve reconstruction surgeries for adults and children with spinal cord injuries as well as brachial plexus injuries.