North Carolina Mom of 3 Who Fought Off Shark While on Vacation Speaks Out: ‘I Remember Pulling My Arm Out of His Mouth’ 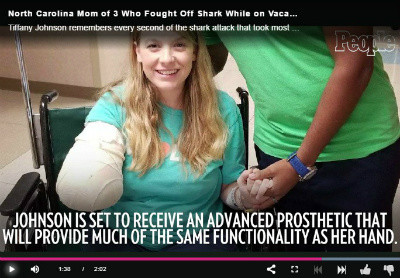 Tiffany Johnson remembers every second of the shark attack that took most of her right arm.

“I was just floating there and then I felt this bump and when I looked to see what I’d bumped into I was face-to-face with the shark,” she tells PEOPLE.

The 32-year-old mother of three from Concord, North Carolina, was on the final day of a seven-day cruise through the Caribbean with her husband, JJ, in early June. They had gone parasailing earlier in the day and were snorkeling not far from the Atlantis Resort in the Bahamas when the attack occurred.

Doctors Glenn Gaston and Bryan Loeffler are hand and upper extremity surgeons with OrthoCarolina in Charlotte who operated on Johnson in hopes of getting her as much movement as possible. The two performed a surgery that is only done at a few medical centers across the country and will hopefully allow her to use a prosthetic in much of the same way she used to use her own hand.