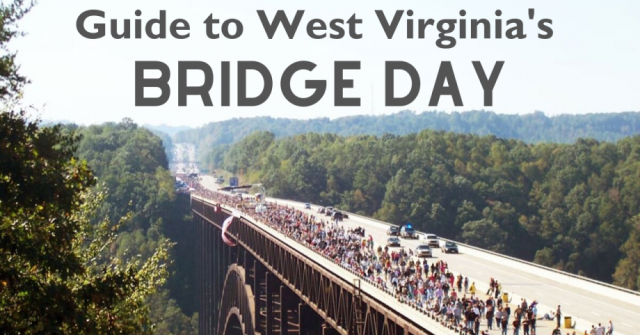 If adrenaline, adventure, and whitewater rushing through a deep, rocky gorge sound like the components of a perfect weekend getaway, make plans to visit West Virginia’s New River Gorge for Bridge Day. This celebration of extreme sports and the natural beauty of the Mountain State takes place more than 800 feet above one of the oldest rivers in the world.

On October 19, BASE jumpers, rappel teams, whitewater paddlers, climbers, and thousands of outdoor enthusiasts will gather along the gorge’s sandstone cliffs for adventure sports, demos, concerts, tours, and tastings to commemorate the 40th anniversary of the festival. Find out how to make the most of your trip with our guide to Bridge Day 2019.

The Birth of Bridge Day

In the early 1900s, the only way across the New River Gorge, one of the deepest gorges in the eastern U.S., was by one-lane road. When the largest arch bridge in the world was constructed 876 feet above the river in 1977, it was an engineering marvel. The longest steel span in the Western Hemisphere and third-highest bridge in America reduced a circuitous drive on winding mountain roads to a trip lasting less than a minute.

Two years after the bridge was constructed, local coal mine foreman, Army veteran, and skydiver Burton Ervin parachuted onto the bridge and then became the first person to BASE jump into the gorge. Why? He’d been told it couldn’t be done. In gear that resembled a ‘70s-era Elvis jumpsuit, Ervin ignited an extreme sports movement that led to the largest single-day festival in the state.

While only a limited number of experienced BASE jumpers are allowed to make the leap on Bridge Day (400 to be exact), 16 lucky novices will be paired with experienced jumpers for a tandem BASE jump into the gorge. You have to apply and be accepted for both types of jumps. BASE jumpers who’ve jumped elsewhere but not in the gorge arrive mid-week for first-jump classes. They learn about the wind currents and other variables unique to the New River Gorge.

The most experienced BASE jumpers can extend their seven-second drop by an additional 40 feet by launching from a swaying scissor lift placed on the bridge just for the event. Another option is the BASE catapult, which launches jumpers into the air, human slingshot style, giving them more opportunity for flips and acrobatics. Then there’s the rappel, open to experienced individuals and teams who are comfortable with the equipment and skills needed for an 851-foot fixed rope rappel from the bridge catwalk. Up to 350 rappel spots are filled by lottery several months before Bridge Day.

While spectating is thrilling enough for most inexperienced adrenaline junkies, there are more adventurous options if you like to live on the edge. Step off the bridge gridwork and into thin air on the High Line, a controlled rappel where you drop 300 vertical and slide 600 to 700 feet during the descent. Or you can take the Bridge Walk, a guided, two- to three-hour walk on the catwalk suspended 25 feet under the roadway. Run the span during the Bridge Day 5K road race on Saturday morning, or walk on the bridge from 9 am to 3 pm, the only time all year that the bridge is closed to traffic. Contrary to rumor, there’s no ziplining or bungee jumping at Bridge Day. But, there will be plenty of adventure sport demos to satisfy your craving for danger.

Take a bottom-up approach to spectating with an Into the Gorge pass. Only 500 passes are sold for the bus ride to the bottom of the gorge on Saturday, so reserve your spot early. If you’re feeling fit, visit the gorge bottom by doing a nine-mile round-trip hike to the river and back on Route 82. If you prefer to paddle, check out special Bridge Day rafting trips offered by most New River outfitters. Most tours include the chance to watch the action from the lower bridge down on the river. Gorge hiking trails provide another unique perspective to view BASE jumps. Follow the 2.4-mile Endless Wall Trail or the 1.6-mile Long Point Trail for easy to intermediate treks that hug the gorge rim and lead to panoramic overlooks.

Fill in the rest of your long weekend with the best of Appalachian food, drink, and crafts. There will be 180 vendors set up Saturday by 9 am at the approaches to the bridge. Organizers recommend arriving early to see and do everything before the event wraps up at 3 pm and traffic flows back onto the bridge at 6 pm.

You can sample chef specials from as many as 15 local restaurants at the Taste of Bridge Day from 5 to 9 pm on Friday. You can buy tickets in advance for the culinary event and live concert hosted by Adventures on the Gorge. After the BASE jumping concludes, the town of Fayetteville hosts the Chili Cook-Off & Craft Beer Festival from 2 to 5 pm in the downtown area. On Friday night and Saturday night, you can enjoy live music at many local restaurants and concerts at the Cascade Festival Grounds in Fayetteville. There’s plenty of parking at satellite lots and shuttle service between festival venues all weekend long. Check the New River Gorge CVB website and the Bridge Day Facebook page for updates.

Rock Climbing in Winston-Salem: What to Know and Where to Go Learn to Curl in the Carolinas (Video) Experiencing the Biltmore Estate in Asheville Cycling in Charlotte Tuck Fest - US National Whitewater Center A Quick & Dirty Guide to Winston-Salem's Trail Running Scene
View All Related