Going Cold Turkey: What Our Docs Won't Eat at Thanksgiving 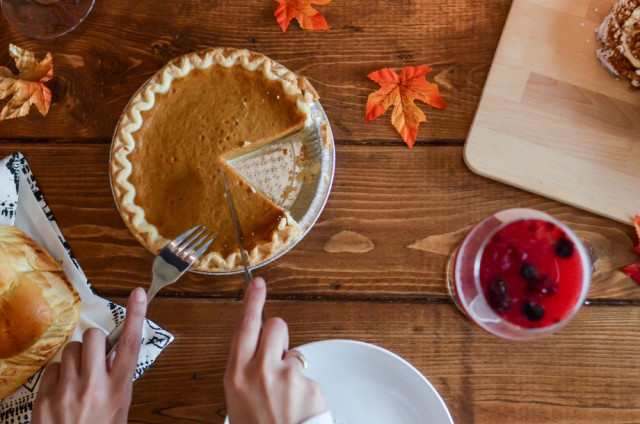 Thanksgiving is a time to count blessings, be with family and friends, and of course, to eat.  It elicits remembrances of the colonial Pilgrims' harvest meal in 1621 and kicks off the golden holiday season and its mirthful festivities.

Our own doctors happily admit they like to eat heartily at Thanksgiving, piling plates high with food and digging in to share a special once-a-year-meal with their loved ones.

And while many of our docs like to cook up a storm during the holidays, even they can be picky when it comes to what they put on their plates. We asked them to share what they will not be eating this Thanksgiving.

HEALTHY EATERS
This year I am on a low carbohydrate diet (and have been for the last six months) and will not be eating any sweets, grains, root vegetables, etc. So... no dressing, sweet potatoes, rolls, cranberry sauce or desserts for me.
Virginia Casey, MD, OrthoCarolina Pediatrics

I won’t be eating leftovers. Having one unhealthy meal every now and then does not impact your overall health and fitness. The key is to get back to your normal diet the next day. The problem with the holidays is not the food on the day of... it’s the leftover food after. I’ll also exercise in the morning on the day of and the day after Thanksgiving to avoid the unhealthy feeling that comes with holiday food.
Kinjal Parikh, DO, OrthoCarolina Spine Center

LEARNING FROM EPIC FAILS
In one of her years in college, my daughter came home for Thanksgiving and announced that she was a vegetarian. My wife obliged her by fixing all of us a “tofurkey”. They take tofu, beat it flat like a pancake, cut it in the shape of a drumstick and then you bake it in the oven. As one would guess that was the nastiest bite of a Thanksgiving meal that I have ever had. Her brother and sister chimed right in with me about how awful that was. Even she had to agree. We all had a good laugh about that and it was the last time that has been served at our Thanksgiving meal. Oh, my daughter, by the way, is happily married now with three kids and eats a well-balanced diet of fruits, vegetables, and MEAT.
David DuPuy, MD, OrthoCarolina Rock Hill

From the book of family legend, I will definitely not be eating oyster stuffing. While I love an oyster on a saltine with a cold beer, years ago in an attempted recipe with oysters in the stuffing was met with epic fails! No shellfish with my Thanksgiving bird please!
Robert Erdin, MD, OrthoCarolina Concord

IT'S A TEXTURE THING
I won’t eat potato salad or candied yams since I have issues with soft textures.
Michael Bates, MD, OrthoCarolina University

I pretty much eat anything, however, there are a few things that I'm not fond of ... meat and ground nut stuffing, turkey giblets, pecan pie. I couldn't care less if they didn't make it on the menu.
David Ciaccia, DO, OrthoCarolina Gastonia

Green bean casserole, one of my least favorite foods that so many people seem to love.
Christian Clark, MD, OrthoCarolina Pediatrics

I will not eat green bean casserole. The combination of green beans, cream of mushroom soup, and crispy onions have never been appetizing to me. The appearance of it looks like it should be in a baby’s diaper instead of the Thanksgiving table.
Michael Paloski, MD, OrthoCarolina Pediatrics

SQUASH!! I love Thanksgiving and everything about it and I love almost all vegetables. But I just can’t tolerate squash. It’s the texture. The other interesting thing is I have not been eating sugar or grains for a year now, so I have to tweak a lot of the traditional Thanksgiving fare. Mashed cauliflower rather than mashed potatoes. And no grain stuffing! It takes some creativity, but there are many good recipes out there.
Benjamin Sutker, MD, OrthoCarolina Rock Hill

Brussels sprouts in any form. My family tries to sneak them into casseroles but I am on to their conspiracy!
John Temple, MD, OrthoCarolina Pineville

SO MANY OPINIONS ON LIVER AND CRANBERRY SAUCE

Chicken and Turkey livers are a no go…otherwise will eat anything!!!
Brian Curtin, MD, OrthoCarolina Hip and Knee Center

Canned cranberry sauce. Why is this even a thing?
Rodney Stanley, MD, OrthoCarolina Mooresville

I pretty much each everything, but cranberry sauce and jello molds with weird fruits inside are at the bottom of the list for me.
Todd A. Irwin, MD, OrthoCarolina Foot and Ankle Institute

I love it all!
Bo Mason, MD, OrthoCarolina Hip and Knee Center

Having worked previously with some of the surgeons from Ortho-Carolina, I loved reading all of the comments. Cranberry sauce is most appetizing when eaten with a bite of turkey and dressing. I am with Dr. Curtin, I hate livers. When I was a child I fed the livers to Whiskers, my cat! If I cook, I make my grandmothers dressing, which none of my family has been able to replicate. I too am watching my weight and A1C; very "thankful that I am healthy." Do not take a nap after the meal; take a walk.
- Melba Berry Payne, RN

These were funny! A couple of the good doctors missed their true calling as the Thanksgiving police. Instead of thankful, we’ll feel guilty as we eat our turkey and root veggies. Dr. Bo Mason may come to my house bcs he likes all the wonderful food of Thanksgiving.
- Mary

Loved all the quirky opinions on T.food. I wonder how many changed your minds!
- Jeannette Barrell

I loved the fact that you can see these doctors as normal humans. You always see the professional side and not really the human side. I enjoyed seeing all the things that they really didn't care to eat.
- Celia K. Aaron
Reply From: OrthoCarolina

Thank you Celia, we appreciate it.

Love your doctors and staff, your newsletter, and your comments. I'm a fan.
- Antonia Moore
Reply From: OrthoCarolina

Thank you very much Antonia!

I enjoyed reading it all. Especially from my favorite doctor,Dr.Todd Irwin. Happy Thanksgiving to everyone at OthoCarolina absolutely the best medical care.God bless you all.
- Martha Ginebra
Reply From: OrthoCarolina

We appreciate it Martha.

This year for the first time in probably over 30 years, Thanksgiving was not at my home. I suggested that my Step Daughter host since they were in a new bigger home. We had a lot of food but most of it was bought already prepared. My wife agreed, next year we host since everything is home made at our house. I love all the Traditional Thanksgiving food, Turkey, dressing, gravy, my eggplant casserole, squash and congealed cranberry salad. To die for. Sorry Doctors but I don't care if it's healthy or not.
- Robert Crick
Reply From: OrthoCarolina

Our family is strictly keto this year. Many new and delicious recipes. I have got my A1C down from 7.0 to 5.5 the last six months.
- Brent Case
Reply From: OrthoCarolina

John Temple, I'm with you on the Brussel Sprouts!!
- Ken Andrews
Reply From: OrthoCarolina

This was a pleasant change to read. I love the thought of doctors being REAL people. This was a very creative suggestion from someone on staff. Bravo !!!
- DM Wilson
Reply From: OrthoCarolina

So glad you enjoyed DM, thank you.

Not just because yinz doctors are my most favorite medical group,but I thought this was some of the most funniest commentaries I've ever heard about food! Please continue to share stuff like this more often!
- Darrell Conte
Reply From: OrthoCarolina

Thanks so much Darrell!

I love all the comments. Love Dr. Mason' s that he loves it all. Thank you Dr Mason for my new hip. 21/2 years and no problems! Happy Thanksgiving Ortho Carolina
- Vickie Cope
Reply From: OrthoCarolina

Thank you for the kind words Vickie!

Had tofurkey for my vegan daughter, but we ate ham. Agree with the Brussels sprouts..they are not welcome at my table. As cute as they are, the smell of them alone gags me. Hope all of you have a great holiday and eat what makes you happy!
- Lindell Long
Reply From: OrthoCarolina

This made me smile. And I have to agree about the jello molds. Yuck.
- Jill
Reply From: OrthoCarolina

Smiles are good! Thanks Jill.

Got a link to this in my email. Thought it was funny and I share some of the same sentiments. I do not eat or will I ever want to eat green bean casserole and I don't do the whole cranberry sauce thing either. I was reading the doctors comments on those two items to my wife and she says that is just a man thing and when she had me go back and look at the poster's names, it appears that it is a man thing.
- Thomas T
Reply From: OrthoCarolina

You definitely saved the best comment for last. Thanks for the laugh!
- Judy Beebe
Reply From: OrthoCarolina

We agree Judy. Thank you!

I love the down to earth side of you all. I have to admit, I love cooking. My granddaughter just asked me today, why do I like cooking so much? “It’s an art and very therapeutic.” By the way, my favorite, sweet potato pie. Enjoy the holidays.
- Denise Cooper
Reply From: OrthoCarolina

Thanks to Dr. Norcross, for helping me focus on me being healthy. I have now lost 128 lbs. And thanks for my new hips! Happy Holidays!
- Sherry
Reply From: OrthoCarolina

I enjoyed reading all of the foods that you don't like or don't eat on Thanksgiving. I laughed at some of the answers and I especially enjoyed reading Dr. DuPuy's article regarding his daughter and the Tofurkey. I ate so much liver growing up that I can not stand liver now. I was always anemic and that was what I had to eat. Thanks for making me laugh today!!
- Barbara St. Clair
Reply From: OrthoCarolina

We are glad you enjoyed it Barbara.

Love that you guys do not take yourselves so seriously that you allow patients to see this side of you. That's part of the reason I love Ortho Carolina.
- Celeste Bradley
Reply From: OrthoCarolina

Thank you so much Celeste!