From Fractures to Fire Suits 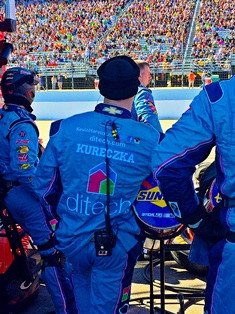 When it comes to work, certified athletic trainer Evan Kureczka is almost always running at top speed. Most workdays you’ll find him at the OrthoCarolina University clinic providing rehabilitative care to patients; as many as 50 a week. As a member of OrthoCarolina’s Motorsports team, he also spends time with NASCAR patients during the week as the head athletic trainer at Stewart-Haas Racing, typically seeing 30 patients a week or more.

As if his high-speed schedule wasn’t busy enough, Kureczka plays double duty for Stewart-Haas Racing, acting as integral pit support and fuel runner for driver Kevin Harvick’s pit crew at races each weekend. An altogether separate job from his athletic training role with the team, he travels with the team (usually by private jet) to NASCAR Sprint Cup races across the country. At each track he puts on his fire suit where he’ll spend hours making sure the No. 4 car is ready to go and has the fuel it needs during high-intensity races.

Kureczka took a brief pit stop from his fast and furious workload to answer some of our questions about his roles in both jobs, and how he manages it all.

What made you want to go into athletic training?

At the University of North Carolina at Charlotte I planned to pursue pre-medicine, but during my sophomore year I suffered a foot injury while playing pickup basketball. I had to wear a walking boot for a couple of months and was frustrated by the recovery process. That experience helped me better understand sports medicine and I knew that when it came to medicine, the sports medicine side was my passion.

How would you describe your role at OrthoCarolina?

Most of my time at the clinic is spent with my three-member team; a physical therapist, physical therapist assistant, and athletic trainer (me) to provide rehabilitative care to patients. Working as a team is beneficial because each team member has unique strengths and skill sets. It also increases the availability of appointment slots for our patients to be seen.

You’re also an athletic trainer for Stewart-Haas Racing through OrthoCarolina. How do those roles intersect?

What are some of the most common injuries you see?

NASCAR is a long season without many off days. With the fast pace of a race, the nature of their jobs means a lot of repetitive motion for the pit crew members as they work quickly on a car. Combine that with a long season and busy schedule and it is conducive to chronic and overuse injuries. Some of the most common include lateral epicondylosis, biceps tendonosis and sacroiliac joint dysfunction. Because these athletes are required to perform explosive movements in a confined area, with lots of rotational and pivoting mechanics while at the same time carrying, jacking, and pulling heavy loads, their joints take a lot of stress. These stresses often leads to a variety of acute injuries, such as most commonly labrum tears, rotator cuff tears, ACL tears, meniscus tears, and disc pathologies.

If a pit crew member has an injury that needs care beyond your help in the shop, what happens?

Bill Heisel heads our Motorsports program and we both treat patients at the shop, but at times patients need further diagnostic testing that may require them to go to one of our OrthoCarolina offices. Occasionally, Bill will refer an athlete to a specialist, such as Dr. Glenn Gaston for hand injuries or Dr. Alex Chasnis for spinal injuries. What we do requires good communication and teamwork to keep pit crew ready to compete every weekend.

Do you think there’s a difference between your NASCAR patients and your regular patients?

It’s important to form a bond with all of my patients because it aids in communication, trust and ultimately better medical care. I usually see clinical patients about three times a week, and I also see my NASCAR patients about three times a week in the shop. Traveling and working as a pit crew member in such intense situations, however, has enabled me to get to know each NASCAR patient’s body and how they respond to various injuries and treatments. There is also a difference in the way I might structure care for patients I see in the clinic with, for example, a rotator cuff issue versus a tire carrier with the same injury. They have different jobs and the physical stresses of those jobs will be very different.

You are also a member of the pit crew at Stewart-Hass Racing. How did that happen?

During my time in the shop I spent some time hitting lugnuts (using a wrench to put on or remove lugnuts from a race car) and began to better understand the forces and stresses placed on the body from the torque and vibration of the gun. I also was able to better conceptualize the physical demands required from my lower extremity to get in position to change a tire and stabilize myself while doing so. One of my patients, James Kenner (gasman for Tony Stewart’s No. 14 car), suggested I travel to races as pit support to gain a better understanding of how a race affects each pit crew member’s body.

The pit coaches got on board with the idea, one thing led to another and before I knew it I was in a fire suit. It has been educational because I’ve been able to firsthand experience the wear of traveling, setting up and breaking down pit boxes, and heat stress on the body from the fire suits and Nomex® (fire-resistant) clothing. It may be a separate job but it’s helped me in my role as team athletic trainer, increased communication and made us a stronger team.

What do you do as part of the pit crew for SHR?

We arrive to the track when the garage opens, which is usually six hours before the race begins. Once there, I will start running our tires for the race to our pit stall and join the rest of our team to setup our pit box, prep tires, and get the crash cart ready. There is normally some downtime which allows me to go check-in on all our teams and individuals that I have been working with during the week. Every track has an infield care center, equipped to run as a mini-hospital that Bill, NASCAR nurse liaisons and emergency medical personnel can see athletes when needed.

About two hours before the race we will eat our main meal. During the race I am specifically with Kevin Harvick’s No. 4 team and we normally meet in the hauler about an hour before the race, prior to going out to pit road. Once the race starts it is my responsibility to receive the gas can from our gasman during pit stops and run fuel. Upon completion of the race I assist with breaking down the pit box and loading the hauler.

What is a typical day like in the training room at Stewart-Haas Racing?

I have an idea of what to expect from the previous week and the injuries that occurred at the race over the weekend, but you never know what someone might walk in with. I will arrive and begin treating the common overuse injuries, acute injuries from the previous race on a Monday or maybe pit practice later in the week, and post-operative rehabs. However, I have had people walk in after a car has been dropped on their foot, lacerations from lug nuts flying, someone coming to grab me because someone went down out back at practice, burns and more. Bill will often stop by while I am at the shop to help with evaluations, send for diagnostics, and occasionally refer to one of our specialists.

What is your schedule like when it comes to working on the pit crew and traveling with the team?

Depending on what coast and state the race is located in or whether and whether or not the race is during the Chase (playoffs), we fly out either the day before or a couple of days in advance. We always fly back immediately after we finish breaking down the pit box and loading the hauler.

Is it hard to be both the athletic trainer for a NASCAR team as well as part of the team?

No, if anything it makes it easier. Being a part of the team is beneficial to me as an athletic trainer because being around the team helps me develop a bond with the guys that creates a trust and helps us read one another at the track and in the training room during treatments and rehabilitations. We can be friends, co-workers, and businessmen at the appropriate time depending on which role is necessary to get the job done.

What is your favorite part of athletic training?

My favorite part of athletic training is watching an individual I have rehabilitated return to activity. I never want anyone to be injured, but the more severe the injury and the more grueling the rehabilitation process, the more rewarding it is to see them return and earn their position back.  It takes a lot to keep drivers, pit crew, road crew, crew chiefs and more ready to compete every weekend and with all the individuals that OrthoCarolina Motorsports cares for, it’s very much a team effort.

Ice vs. Heat: What Should I Use, When? Common Foot Conditions Treated with Orthotics Gaston and Loeffler honored by the American Academy of Orthopedic Surgeons (AAOS) for their research Dr. Darden -- OrthoCarolina Spine Surgeon OrthoCarolina Powers 2021 Charlotte Podcast Festival How Physical Therapy Supports Your Long-Term Health
View All Related