From Cycling to Crutching: Battling back from the emotional side of injury 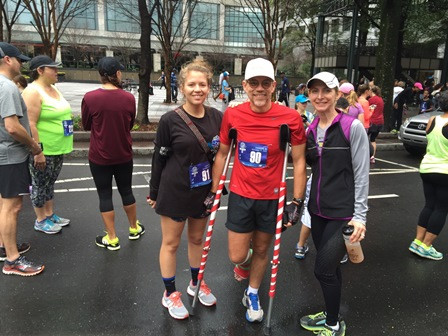 “The bicycle is a curious vehicle. Its passenger is its engine. -- John Howard”

In Bill Alford’s own words, he’s an old endurance athlete. 59 years young, to be exact. He started doing long-distance triathlons at the age of 52, and eventually progressed to Ironman triathlons. One of Bill’s favorite activities is long-distance endurance cycling called randonneuring, which involves self-supported cycling events of 120-175 miles.

In February 2015, Bill had stopped mid-ride during a 375-mile, two-day timed cycling event, a qualifier for the Paris Brest Paris (PBP), to fix his bike on the side of the road. Endorphins pumping as he hurried to make the needed repairs and get back in the race, he never saw it coming.

A fellow cyclist crashed into Bill roadside, shattering his ankle.

The human brain is a complex organ that guides the mind and our mental maps, and the ability to control our thoughts isn’t always as easy as it might seem it should be. The depression-like symptoms that often come with the physical ones during recovery from sports injuries are very real. From pro athletes to weekend warriors and everyone in between, cessation of physical activity can cause irritability, moodiness, lethargy, anxiety, self-esteem issues and more.

While he was grateful the injury hadn’t been worse, the comprehension that he had to take time away from his beloved cycling was a crushing realization for Bill. His first surgery with Dr. Matthew Gullickson and PA Kevin Brown had gone well, but he’d been training for the PBP that August for several years, and would miss most of the qualifying rides.

“Very depressed about this turn of events, I sat around feeling sorry for myself, doing no exercise whatsoever. I watched too much TV and put on weight. I basically let my body go.” – Bill Alford

Steering towards a return

Three months after his initial injury, Bill received word he could resume exercise, with the exception of running. He plunged headfirst into long distance bike events, doing one-legged drills on a stationary bike with intervals that simulated mountains. He tested the roads again, riding distances of 85 to 120 miles at a time, and even started long-distance kayaking. But by September, ankle pain and swelling led him back to OrthoCarolina. Bill’s level of activity had caused movement of the unhealed bones and loosening of the screw heads that held his ankle intact. His foot was put back in a boot to prepare for surgery, and he was off the bike yet again.

Bill’s second ankle surgery was in November 2015. Dr. Bruce Cohen and PA Kelly Stafford replaced all of his hardware and added titanium screws, and did a bone graft to allow the bone to knit and heal properly. Determined not to sit around feeling sorry for himself this go-round, Bill started walking his neighborhood on crutches, even making the nearly 4-mile round trip trek to Harris Teeter and back. He was getting faster and faster on his temporary mode of transportation. He also decided to work on his strength, pulling out his old weight bench to bench press, adding in push-ups and planks to strengthen his upper body.

“Cyclists have legs to die for, but little chicken arms.” – Bill Alford

Finding a new cadence, and a new record

On December 12, Bill completed the Jingle Bell Run for Arthritis, his first 5K on crutches. His time was 1:01:40, faster than the standing record for men’s crutching in the Guinness Book of World Records. The same grit that allowed him to cover endless miles of road on his bike was still there, and it was the clincher that reinforced his will to persevere. He signed up for the Belk Bowl 5K on December 27.

Weather didn’t seem to be on Bill’s side on race day. He woke up to pouring rain and almost didn’t go to the race for fear of slipping. But at noon the glorious sun came out and he rushed to uptown Charlotte for the race. Bill’s daughter and friend served as official spotters, walking with him throughout the duration of the race to record and track the event for the Guinness Book of World Records. In the end, Bill smashed the standing record for men for crutching a race, coming in at 54:41.

Regardless of the outcome of the official record, Bill came to realize how much mental rehabilitation and keeping perspective play a role in recovery from sports injury. By redirecting his energy he found miles of internal tenacity he had no idea existed, and he hopes to be a better athlete upon full recovery.

“Bottom line – you can sit around feeling sorry for yourself or you can get out and do amazing things with what you have to work with.” – Bill Alford

A personal note from Bill Alford: Throughout my injuries and recovery, I appreciate the support and encouragement from the many folks at OrthoCarolina....not only the doctors and PAs but the folks that answered my MANY questions, wrapped my many casts and provided encouragement for my quest to "go for it". Thank you.