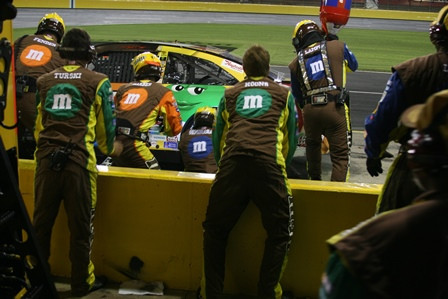 Any sport will cause wear and tear on the bodies of athletes over time, but for a NASCAR pit crew, roles on the team can play a big role in the type of injuries they face.

Glenn Gaston, MD, Chief Hand Surgeon of the OrthoCarolina Hand Center, and William Heisel, PA, Director of OrthoCarolina Motorsports, performed an investigation to examine the musculoskeletal forces on the bodies of motorsports athletes, specifically upper extremities (shoulders, arms and forearms, wrists and hands). By studying how each position on a team can be intrinsically linked to patterns of injury based on their position on the car, medical providers can better diagnose and treat NASCAR athletes. This type of research helps develop injury prevention measures for the future, and assists teams in deciding when to return drivers and pit crew to work following injury.

Most major professional sports have long-documented position-specific injuries in order to allow for treatment, prevention and decisions when to return an athlete to practice and play. Prior to the upper extremity motorsports study, little was known about similar trends in NASCAR despite the fact that the sport is one of the most popular in the United States, averaging 5.8 million viewers per race.

The descriptive epidemiological study followed 226 total NASCAR patients with upper extremity injuries between July 2003 and October 2014, tracking diagnoses, mechanisms of injury and positions of each individual. Their combined 118 injuries included 52% that occurred during a NASCAR event or practice. Breakdown of injuries by position included Changers at 42% of all injuries, Drivers with 16% of all injuries, Carriers at 14%, Jack men with 11%, Fuel men at 9% and Utility men with 8%. Orthopedic injuries in NASCAR vary between positions and can be linked to the demands of each role. The majority of pit crew positions are at risk for epicondylitis (pain in the lateral tendons of the forearm, also known as tennis elbow).

In general, NASCAR drivers and pit crew athletes will work:

“NASCAR as a sport offers a unique opportunity for us to research as every team except one is located in our region,” said Heisel, who oversees the OrthoCarolina Motorsports medical program and athlete care. “Our orthopedic group serves as the official team physicians for a majority of the starting cars at each race. Of the other 13 cars per race we see the overwhelming majority of their injuries as well but they do not necessarily have an official team physician.”

OrthoCarolina Motorsports provides care in team race shops during the week and trackside at races during the NASCAR season, including management of chronic, acute and major injuries, athletic training and physical therapy services, and specialist and primary care referrals. In its entirety the service line oversees medical care for NASCAR pit crews, drivers, team employees and officials as well as many of their family members. OrthoCarolina Motorsports has formal relationships with Joe Gibbs Racing, Hendrick Motorsports, Stewart-Haas Racing, Roush Fenway Racing and Richard Petty Motorsports.

ACL Injuries 101 – What Is ACL Reconstruction? How to Treat & Prevent Common Basketball Injuries Why Position-Specific Injuries are Common in NASCAR How to Spice Up Your Running Routine How Ultrasound-Guided Injections Can Help Treat Pain Running Cadence Counts
View All Related