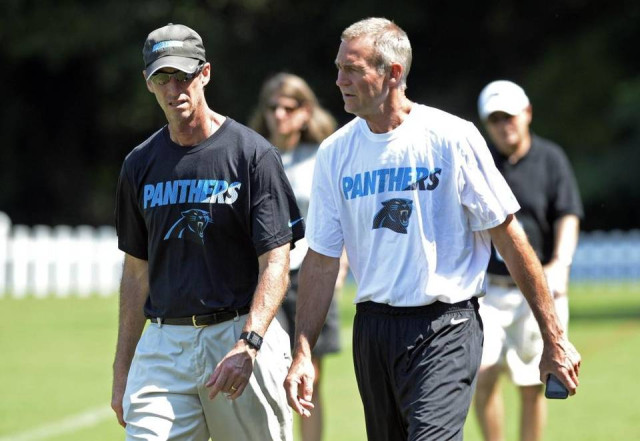 Story shared with permission from the Charlotte Observer

If you’re a high-profile athlete and you have a foot or ankle injury, there’s really no debate.

NFL, NBA, NHL and MLB players know about him. So do their agents and their team’s doctors. In recent years, major college athletics programs have sent their top players to Charlotte to see Dr. Bob.

Even though Charlotte’s Dr. Robert Anderson is the most well-known foot and ankle doctor in the world of sports, little is known about him. Including this one with the Observer, Anderson has done two media interviews in his career, which stretches back to the early ’90s.

He’s regularly confused in media clippings with Dr. James Andrews, the most well-known sports doctor in the country. An ESPN scroll might show “Dr. James Anderson” or a reporter’s tweet could read “Dr. Bob Andrews.”

Dr. Bob doesn’t mind. He doesn’t like to promote himself.

“I just thought that’s what was right,” Anderson told the Observer. “I’ve been busy. I don’t need the business. Believe me, I don’t need any more business.

“I don’t want to promote myself from an ego or business standpoint because people call and can’t get in anyhow, and they get upset.”

He works for OrthoCarolina and as a team doctor for the Carolina Panthers. He has a seven-month waiting list and does everything he can to keep it down. By his own admission he eats terribly and subsists mainly on coffee. He doesn’t take a lunch break and instead sees priority athletes during that time, usually on Tuesdays, Thursdays and sometimes Fridays.

He has operated on hundreds of professional athletes, including some of the sports world’s superstars – Cam Newton, Stephen Curry and Derek Jeter, to name a few.

These are players who depend on their bodies for their livelihood, but he tries to block out the idea that millions of dollars are riding on him when he enters the operating room.

A path determined by fate

Anderson’s path from undergrad at Mississippi and med school in Wisconsin to being the preeminent foot and ankle doctor in the sports’ world, based in Charlotte, is equal parts talent and experience, plus some luck.

Anderson, 58, did an internship and residency in Charlotte in the mid-to-late 1980s, working with Dr. Angus McBryde on injuries to the sesmoid, the bones underneath the big toe joint that are involved in injuries such as turf toe.

A journal article he wrote, for the Clinics in Sports Medicine, earned him a name, and after a fellowship at the Medical College of Wisconsin, Anderson returned to Charlotte to begin the foot and ankle program at Carolinas Medical Center.

He was there in the early 1990s when Green Bay Packers team doctor Patrick McKenzie, who knew Anderson from medical school, reached out for help.

One of the Packers’ top receivers had suffered a toe injury in the early ’90s, and though neither McKenzie nor Anderson would identify the player, it was likely Sterling Sharpe, who suffered from what was described as turf toe in 1993. The location and doctor for his offseason surgery were never publicly reported.

Sharpe turned in another Pro Bowl season the following year before a neck injury ended his playing career.

“I took him (the player) out to Charlotte and Bob said, ‘Yeah, I think this is what it is,’ and fixed the ligament in the bottom of his foot,” McKenzie said in a telephone interview. “The kid came back, and then everybody started recognizing the problem and know who to send your guy to. Bob took off from there.”

Charlotte’s Dr. Bob became the go-to doctor for ankle and foot injuries in sports. According to reports, among the players Anderson has operated on or consulted about include: Eli Manning, Julio Jones, Ryan Kalil, Kyle Busch, Kevin Durant, Miguel Cabrera and Jon Beason.

“The quote that experience is the mother of knowledge is really so true for this. I’m not better than anybody else. It’s just that I’ve been doing this for so long there’s that experience part.”

Perhaps Anderson’s biggest client, or at least the one who drew the most attention, is former New York Yankees captain Derek Jeter.

In the 2012 playoffs, the five-time World Series champion shortstop broke his left ankle. He sought out Anderson because he “heard that he was the best.”

“He’s very personable, very honest,” Jeter told the Observer. “He gives you all the information you need. You could call him or text ... and he’d get right back to you if he doesn’t answer. It means a lot, especially when you go through something like that.”

Jeter was in the twilight of his career at the time of his ankle injury but wanted to squeeze in at least one or two more years.

But in his rush to return from rehab the following season, Jeter sustained another injury to the ankle and began the 2013 season on the disabled list.

“It was a situation where when the ankle healed, I rushed to get back and I didn’t take the time to strengthen my legs,” Jeter said. “I had a couple of leg injuries, but that was all based on the fact that I tried to get back a little too soon.

“The timeline that he gave me about the ankle healing was right on. The ankle healed, and the injuries that came after that were different. I just didn’t take the adequate amount of time to strengthen the leg.”

Cam Newton faced similar setbacks after his offseason ankle surgery last year. Newton had surgery to tighten ligaments in his left ankle, then missed most of the summer workouts and was held back during training camp.

“There are situations that you know a guy cannot continue to play with what he’s got,” Anderson said, talking generally about the type of procedure Newton had. “When the instability is so great that it’s giving way when he tries to do certain maneuvers, you start worrying about what his long-term health is.

“If you let a guy continue to play with that kind of situation, he’s going to deteriorate his ankle. And then we’re in bad shape with his career.”

During his recovery, Newton suffered cracked ribs during an exhibition, further delaying his return to health.

But he’s healthy now and ready for the 2015 season. Meanwhile, Jeter finished out his career and retired following the 2014 season.

And the Yankees legend and future Hall of Famer credits Anderson for helping him finish his career on his own terms.

“He was very important,” Jeter said. “I’ve been pretty fortunate throughout my career to be pretty healthy.

“There’s always uncertainty when you’re going through the surgery and something of that magnitude. He’s extremely important, not just the surgery but the support he gave me.”

Passing on the knowledge

Anderson says his success has been aided by fate. The chapter he wrote for the journal came at the right time. He knew the right team doctor, who had a key player with an injury he knew something about.

But don’t confuse his modesty with him not understanding his position, and the careers he holds in his hands on the operating table.

“These guys come in with mega contracts,” he said. “You just don’t want to screw something up.

“I guess I’m old and calloused, I don’t ever think about who this is, how much money they make. I look at what’s their age, what’s their position, what are they going to need to get out of this, how can we make this to be the best it can be.”

And he passes along his knowledge to young residents who hope to become pro sports surgeons.

He has a PowerPoint presentation, and he begins by saying you don’t always want to be in the paper.

The series of slides continues, building to his point.

▪ Remember that the player is a patient, first and foremost.

▪ Don’t get pushed around by coaches or agents.

▪ Always talk to the family.

▪ Stick to your guns.

Then comes the last slide, which addresses his view on operating on megastars with mega contracts.

It’s a picture of a little league baseball team.

If you can’t put that pressure aside, “maybe consider taking care of a team with a lower salary cap,” he says.

Good morning, My name is Sarah Bastian and I am a Year 11 student at St Mary’s College Adelaide, South Australia. As a part of the South Australian Certificate of Education Curriculum, I am required to conduct a Research Project on an area of interest. I have chosen the topic, ‘To what extent do head injuries in football (AFL or NFL) contribute to brain damage?’ I was wondering if you could provide me with information which will help me answer my focus questions. Thanking you in anticipation, Sarah Bastian.
- Sarah Bastian