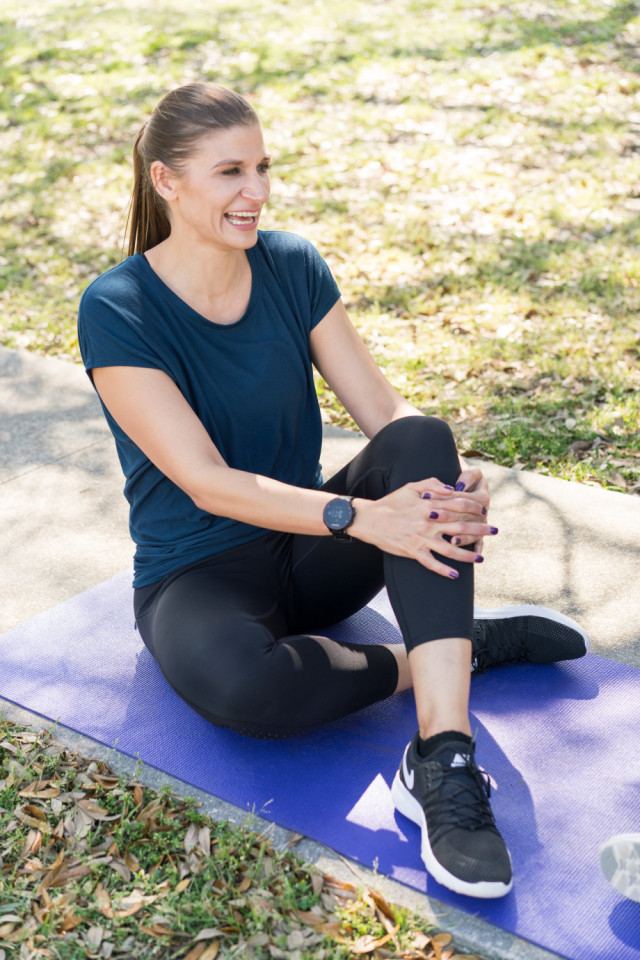 Something just felt “off.” It started with pain during squatting, feeling stuck in a yoga pose and difficulty sitting through meetings. But Erin Lingle had been an athlete her entire life so she did what came naturally and pushed through the pain in her hip.

Staying mobile was top priority so she visited a chiropractor, a massage therapist and even tried acupuncture. For a while, Erin’s efforts kept her comfortable enough to continue running and training for a half marathon until the pain went from tolerable to unbearable. She found herself hobbling back to her car after a run and decided it was time to take a more serious next step.

An MRI revealed a labral tear that was significant enough to require surgery to repair. As the owner/operator of her own fitness company, Lingle Fitness, Erin’s physical health isn’t just about her quality of life but is a requirement of her job. The success of her surgery was essential so Erin began what she calls “doctor shopping” to find the perfect surgeon to be a partner in her recovery.

From her home in Charleston, SC, Erin traveled to meet doctors as far away as Maryland. She did her homework and prepared questions in advance. When she met Dr. Kenneth D. Weeks III at OrthoCarolina South Park, she knew he was the one.

“He spent so much time with me and time looking at my MRI, explaining things to me in detail,” Erin says of her meeting with Dr. Weeks. “He went through and found a lot of things I didn’t know and explained the root of what was going on. He was the only doctor who explained to me the ‘because.’”

Erin knew Dr. Weeks was the surgeon for her when he was able to describe everything in a way that made sense and gave her options to consider, leaving the choice for treatment in her hands.

“Dr. Weeks is the full package,” Erin said. “I didn’t feel like a number with him. I felt like I was his only patient and I was important to him.”

At the end of the meeting, Dr. Weeks stressed the importance of Erin keeping herself healthy by not running. Though this was the best way to keep from needing a full hip replacement, running was Erin’s world and the drive home to Charleston gave her several hours to think and mourn. One of the activities she held most dear could no longer be part of her life.

While she could have stayed deep in this depression, Erin decided to put her energy towards going into surgery strong. She stopped lower body work but focused on an assault bike that allowed her to get in cardio through her arms. Throughout the month before her surgery, Erin practiced being mindful, listening to her body and her feelings.

As she and her husband Amol drove to Charlotte on the day of the surgery, she was ready.

When she came out of surgery, Erin was starving and spent the evening watching Wonder Woman before the real work of recovery began back in Charleston.

Erin admittedly doesn’t do well sitting still, so she learned patience for things like moving slowly up the stairs. She poured herself into physical therapy back in Charleston with Dr. Will Avery of Private Therapy Services and found little victories at each session. She visited Dr. Weeks at two weeks, six weeks and three months post-surgery and her hard work in physical therapy paid off when she was cleared to be active.

That mindfulness Erin developed during the hardest times of her recovery isn’t going away. She says her biggest takeaway from the experience is to simply listen to your body.

“I tried for so long to ignore my body telling me that I should stop running,” Erin said. “As athletes, we often just keep pushing. You have to allow yourself to be vulnerable and realize you have an injury and you have to do something about it. You have to take time out to really listen to your body and make adjustments. Dr. Weeks said he did the surgery but I did the recovery.”

I also chose OrthoCarolina. After interviewing 4 different surgeons fourteen years ago, I chose Dr. McCoy at OrthoCarolina. My visit with him showed me that he took complete interest in my well being and spent time with me to explain and answer every question I had. He made me feel as if I was the only patient and that I was important to him. Dr. Coy replaced my left hip in 2004. This past Monday, May 14th, he again was my surgeon and replaced my right hip. I have complete trust in this man's skills and abilities. I experienced the same caring and concern as you did from the entire staff at Mercy Hospital, located next door to OrthoCarolina. I am still recovering, but my activity level is returning surprisingly, quite well. Thanks to the wonderful people at OrthoCarolina, and especially, Dr. McCoy, for taking good care of me through my recent surgery.
- DM Wilson
Reply From: OrthoCarolina

I am very much impressed with your will-power and it’s very inspiring.
- Usha singla
Reply From: OrthoCarolina

What Running Means to Them Where to Run in Charlotte How Short Workouts Can Be Beneficial Three Injuries, Three Months: Sarah’s Story Pushing Limits: lululemon® Adventure Royal H. Burpee Was a Real Person
View All Related