Almost to Failure: How a Power Lifter Overcame Devastating Injury to Compete Again 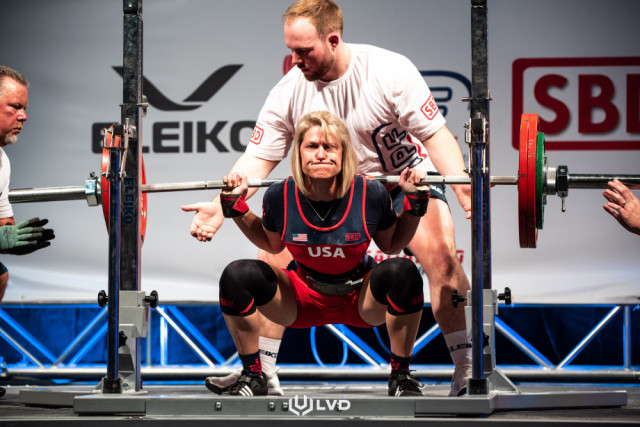 Jennifer Thompson has been a power lifter since 1999. She’s 45 now, but notes what most people don’t know about a sport that can sometimes seem mysterious is that humans actually have the capacity to continue to gain muscle and strength well into their 50s.

“Power lifting is a cool sport,” says Jennifer. “And what surprises most people about it is that older athletes are usually better because they’ve been able to build strength over the years. Competitors in their 20s usually aren’t as good.”

A power lifter focused on competition is normally focused on the maximum weight he or she can lift in a single rep, which also influences the variation of rep type they choose. For Jennifer, the sumo deadlift, with her feet wider apart, was the option that enabled her to truly maximize her lifting potential. But it was also this position that would eventually lead to devastating news.

“My labrum tendon was shredded to pieces.”

Years of power lifting and pulling lots of heavy weight eventually caught up with Jennifer. In early 2017 she tore her labrum tendon, creating a divot in the femur that was shooting pain into her hip socket.  Without the suction seal and cushion of the labrum, increased pressure from friction happens as the joint moves, making injury to the labrum potentially very painful.

In Jennifer’s case, she struggled against a mindset that told her to push through the pain, but it was finally too much. A colleague of her husband had recommended Dr. Durham Weeks with the OrthoCarolina Sports Medicine Center, who also treats the Carolina Panthers and, along with partner Atrium Health, is a provider to the Davidson Wildcats. With Dr. Weeks she laid out a plan to address and fix the issue as quickly but efficiently as possible.

“I really thought my career was over.”

Dr. Weeks performed an arthroscopic labral repair and femoral osteochondroplasty on Jennifer, reshaping her femur and placing stitches around her labrum. During an arthroscopy, a small camera called an arthroscope is inserted into the joint, which allows the surgeon to view images on a monitor and then use minimally invasive incisions to perform the repair. Jennifer’s surgery went well, and she was finally on the road to recovery, at least physically.

“It was hard to hold myself back.”

For Jennifer, power lifting is more than just a sport. Like many athletes, the sport she loves is a defining piece of Jennifer’s life, as well as a career, and it was hard to be patient and work through the process.  With goals and training that had been long planned out, her injury and road to recovery made it more obvious what she was missing. Even going through physical therapy and having to focus on movements she’d known how to do her whole life proved to be not just physically but also mentally challenging. Jennifer says it was difficult to follow physical therapy as prescribed and not try to push the line or go too heavy on her exercises. “I was so afraid I’d ruin the work Dr. Weeks did,” she says. “I just wanted to return to my sport.”

It took hard work, but Jennifer forced herself to focus diligently on the rehabilitation process, and her resolute goal to heal paid off. She went on to the power lifting national championship after training for eight weeks post-recovery, and won her weight class in a highly competitive year. She also went on to win first place in the Arnold Classic, another big competition, and won tenth place overall at the power lifting championship in June 2018.

“You better believe I have years ahead of me left as a competitor,” Jennifer says. “Women compete in power lifting well into their 70s!”

Workout Recovery - How to Get the Most Out of Your Effort Pre-Run Warm-Up: How to Properly Get Your Body Prepared to Run Total Hip Replacement Surgery, Anterior Approach: What to Know What to Expect After Hip Replacement Running While Pregnant: What to Know OrthoCarolina physicians talk with MD News
View All Related