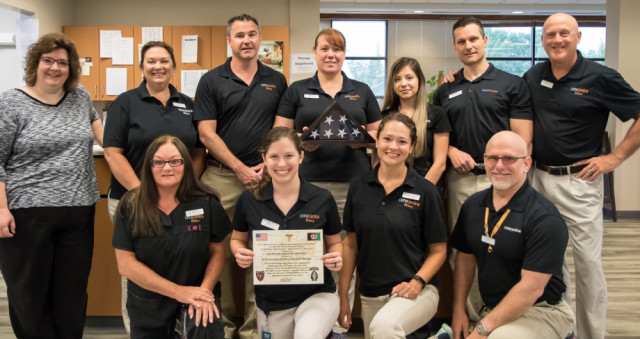 The crash was imminent and Jay sustained multiple injuries to his femur, elbow, wrist, vertebrae and head, including orbital fractures. After rounds of surgeries to treat his myriad of injuries, Jay began physical and occupational therapy at OrthoCarolina Hickory. Though the road was long, Jay made a full recovery.

Not only is the father of two a pilot, but Jay has served 15 years as a Major in the Army as a Nurse Aesthesis over six deployments. During his most recent deployment, the United States Flag was flown over the 933rd Forward Surgical Team at Camp Dahlke, Logar Province, Afghanistan in honor of the Hickory Therapy Department and their efforts to help Jay’s return to full readiness.

The flag is now displayed prominently at the Hickory Therapy offices where the staff is humbled and thankful for Jay's service and proud to have played a vital role in his full recovery.

"This United States flag flow over Afghanistan symbolizes the resilience, tenacity and bravery of the United States Forces to take the fight to our country's enemies wherever they may be and to bring Freedom to the oppressed nations of the world."

I could not be prouder of our OC Hickory Therapy Team. They are a true family and care for our patients and employees with utmost care, understanding and motivation! You guys really rock and so so proud of the work you do. God's peace to each of you! Thank you Jay for your awesome service and dedication to keeping us safe and taking care of your patients, our soilders, also. God's peace to you and all the service men and women who keep us safe. Amen!
- MARY TIMMONS
Reply From: OrthoCarolina