A bout with a devastating injury: How a Charlotte Roller Girl got back on her feet 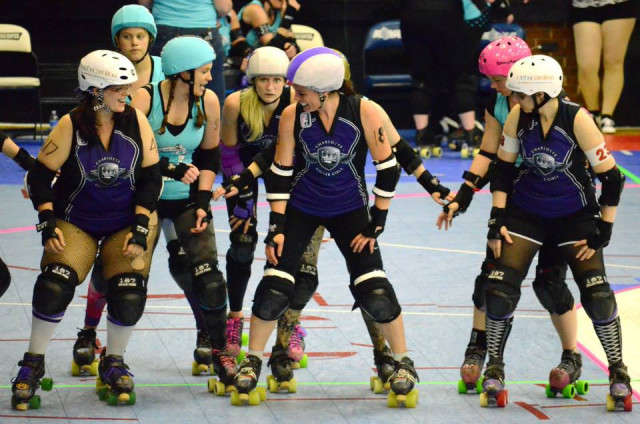 It was just a standard practice for Lorissa Shepstone and the Charlotte Roller Girls last September. They were doing full-contact drills with 3 blockers versus 1 jammer. At one point, Lorissa and the jammer collided, as often happens in roller derby, and both fell to the ground. Lorissa’s foot got stuck amidst a twisted tangle of falling limbs, and that’s when she felt it snap.

Her first reaction was to get back up and play, quickly realizing all she could do was crawl off the track. Thinking maybe it was just a severe sprain, she continued to try to put weight on it, and even drove herself home that night. But according to Lorissa, the next morning the swelling was ‘quite bad’.

“My attitude about the injury…well, it was bad luck. I seem to be somewhat prone to injury…but injuries happen in this sport.”

Like most roller derby players, Lorissa, or Give 'em Hell Vetica (as she’s known to teammates), is tough. She exudes the same intense energy, charisma and sportsmanship as the rest of her team, which puts a primary focus on health, training and giving back to the community. Originally from South Africa, Lorissa has been in the United States for about 4 years and also loves hiking, graphic design andbeing active. As someone who’d endured a torn ACL, PCL and separated left shoulder joint in the past, she didn’t want to take a chance. Sure enough, X-rays at OrthoCarolina Matthews showed a broken fibula and torn ankle ligaments. Dr. DuPuy performed her surgery two days later, inserting a metal plate and 7 screws into her leg to keep the injury in place so that it could heal. Lorissa was on crutches for the next 4 weeks and had to spend most of her time on the couch, but within 4 weeks transitioned to a walking boot. Next came an ankle boot, and nearly 16 weeks after her initial injury, she was able to start jogging lightly.

"I’d never broken anything before, and definitely never had a surgery where I had to have a plate implanted…it was only about 5 months following my initial surgery that I was given the A-OK to really up my activity beyond basic walking.”

After having two screws removed and a few more weeks to recover, Lorissa was cleared to get back on skates, and to run, in March of 2014. The Charlotte Roller Girls hosted their Opening Day bout on March 22, and while she still has to have her skills reassessed before she can compete, she says she knows she needs to take her time and allow her ankle to readjust to skating again.

“Everyone was so supportive. I think that is an important part of any athlete’s recovery; to still feel part of the team even during your ‘down time’.”

Besides her recovery, Lorissa recently added one more accomplishment to her roller derby checklist: the Roller Girls gave her the “Most Bionic” award at their 2014 kick-off party.

Established in 2006, the Charlotte Roller Girls are a fast-paced, high-contact flat track roller derby team that is a member of the Women’s Flat Track Derby Association (WFTDA). The team and its members are dedicated to enriching the Charlotte community and donate a portion of bout proceeds to local causes and charities. For more, visit charlotterollergirls.com.