Clubfoot: How Do Doctors Diagnose & Treat It? 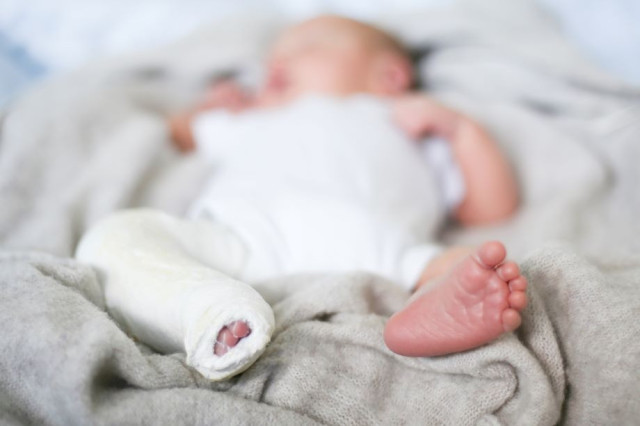 On OrthoCarolina's first episode of the Between the Bones podcast, host Adam Walker chats with pediatric orthopedic surgeon Dr. Virginia Casey, who specializes in the treatment of clubfoot.

Dr. Casey is based at the OrthoCarolina Pediatric Orthopedic Center in Charlotte, North Carolina, and has a passion for taking care of kids. She brings a wealth of experience to her infant patients and their parents while treating clubfoot.

Though the initial clubfoot diagnosis can prompt fear or confusion in new parents, the condition is easily treated using a systematic, proven plan.

You may have heard of clubfoot, or even known someone who was born with clubfoot. But what exactly is it?

Clubfoot, or idiopathic club feet, is a condition that affects infants and causes the feet to be turned inward. For reasons unknown to physicians, some children's spines do not form properly in the womb, which results in their feet being shaped differently.

Infants with the condition are born with feet that tend to be shaped like a club, hence the name clubfoot. The condition is common and can be corrected easily.

How DO doctors DIAGNOSE clubfoot in infants?

Rather than a position issue, clubfoot is an actual problem with the foot and the muscles of the foot.

Often, doctors can detect clubfoot on a prenatal ultrasound, and parents can be alerted to the condition before their child's birth. This ultrasound confirms that the baby is not simply smushed in the uterus and the feet appear out of position.

Sometimes, clubfoot are not detected in the prenatal ultrasound, as the infant can hide their feet during imaging. When clubfoot is undetected during the pregnancy, clubfoot can be detected when the child is firstborn.

What is the clubfoot treatment timeline?

Most cases of clubfoot can be corrected using the Ponseti Method. The Ponseti Method is a casting strategy that has been adapted and perfected since its first use by Dr. Ignacio Ponseti in the 1940s.

Clubfoot treatment begins between four days to two weeks after birth, when the pediatric orthopedic surgeon will first cast the infant's feet. Dr. Casey recommends that the baby goes home without casts for the first few days of life to allow for plenty of skin-to-skin time with the parents.

The casts are changed every week for the first five weeks of treatment until the feet are ready for the next step, a minor Achilles procedure.

When the orthopedic surgeon has determined the feet are ready, they will take a small needle and cut the infant's Achilles tendon.

Though the procedure sounds drastic, Dr. Casey explains that "in a newborn, they grow a new [tendon] within three weeks that's just as strong and perfect as the first one, but it's longer, and it's in a better position than their shortened tendons that they tend to have."

After the procedure, the feet will be cast again. This cast will remain on the infant for three weeks when they will then be ready to transition from casts to shoes.

The next step in clubfoot treatment involves the child wearing specially designed shoes. These shoes should be worn by the infant for 23 hours a day for at least three months.

The duration of this step varies; Dr. Casey's metric for this step's completion is seeing her infant patient willing to bear weight on their feet.

The final stage is the longest step in the Ponseti Method of clubfoot treatment. It's recommended that the child wears their shoes during sleep and naps, which should total around 14 hours a day. The duration of this shoe-wearing step is child-dependent but can last up to 4 years.

Do the casts hurt my child or make them uncomfortable?

Dr. Casey shares that most of the time, infants don't even cry when their casts are being changed. However, there are strategies that parents can employ to make doctor's visits as easy as possible.

Dr. Casey recommends parents bring their baby to the office when they are hungry or just after eating. This way, they can either eat and be distracted or feel tired and happily satiated when casts are being changed.

After the baby receives new casts, they may feel sore the first night, just like the first day after getting braces tightened. But afterward, babies adapt and live their days like all other infants the same age.

What does a clubfoot diagnosis mean for my child long-term?

Though the diagnosis may be scary, clubfoot treatment has been streamlined and perfected over years of testing and tinkering by orthopedic surgeons. Children who have clubfeet do not walk later than those without clubfeet, and past age four, they have a perfectly normal childhood.

Dr. Casey shares that when she talks to new parents, she invites them to, "check the internet and Google search clubfeet, and you will find there are a lot of professional athletes that actually were born with clubfeet and go on to have these amazing athletic careers. And I think that helps."

Clubfoot treatment is time-intensive and requires dedication from all parties: doctors, parents, and especially the child themselves. The origins of the condition are unknown, but the treatment is tested, proven and possible.

Between the Bones, powered by OrthoCarolina, explores adult & pediatric orthopedic conditions, life-changing research and the future of healthcare. Subscribe and listen to learn more about your skeleton and what goes into taking care of it.

Pediatric Orthopedic Care at OrthoCarolina Dr. Casey and The Millers. Part 1. Dr. Casey and The Millers. Part 2: Operation Explanation. What is Clubfoot? OC on the Sidelines – How one Physician Assistant Keeps High School Athletes in the Game No Timeouts: Minimizing Injury Risk in Young Soccer Players Pediatric Orthopedic Care at OrthoCarolina How to Prevent Soccer Injuries Cast/Splint Care Instructions What is Clubfoot?
View All Related