Working to the Bone: How NASCAR’s Mike Hicks Rebounded from Double Injuries 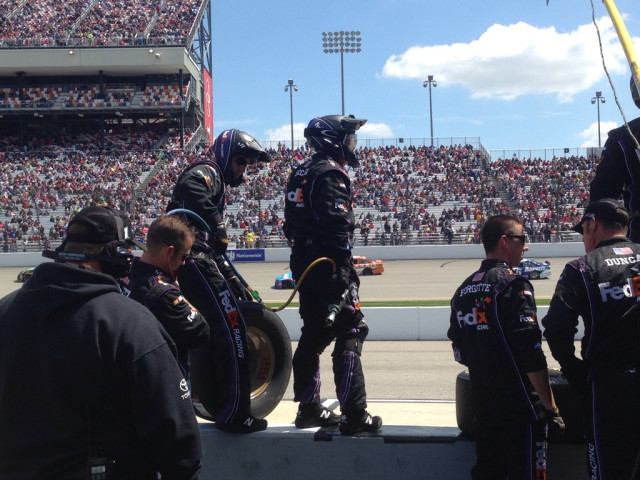 As a rear tire changer for the No. 11 FedEx Toyota Camry, Mike Hicks must hit the lug nuts during Denny Hamlin's pit stops with impeccable precision. He’s part of an elite club of NASCAR athletes who train relentlessly and can react with an almost primal intensity. His hand-eye coordination, speed, agility and muscle memory are so well-honed they’re an innate part of his work.

Hicks can take five lug nuts off the car in just one second flat. To do it he uses a compression air gun and he’s so fast that if you blink, you might miss it. He’s a star of Joe Gibbs Racing, and there is little room for error in his job.

Near the end of 2015 NASCAR season Hicks incurred two injuries; one to his thumb and one to his foot. His ulnar collateral ligament was torn from the bone of his right thumb. He wore an orthoplast splint to help immobilize and protect the thumb, but the forces of the air gun were too powerful even for the splint. Customized Exos advanced technology braces helped carry him through the last few races.

But with just three races remaining in the NASCAR Sprint Cup Chase for the Championship, Hicks sustained an inversion injury to his left foot when he stepped off a wall during practice. An X-ray showed that he had a Jones fracture, a fracture in the fifth metatarsal of his foot and a type of injury with a high rate of nonunion ( the tendency for serious complications due to infection or poor blood supply). His peroneal tendons were attached to the fragment of bone, causing constant movement at the fracture site.

Hicks underwent double surgeries on the same day, under the same anesthesia. Foot and ankle surgeon Dr. Robert Anderson used an intramedullary screw under X-ray machine guidance to place the screw, allowing for the fracture ends to be squeezed together. At the same time, chief hand surgeon Dr. Glenn Gaston performed ulnar collateral surgery to repair the ligament in his thumb.

“Without Bill {Heisel, PA-C, Director of OrthoCarolina Motorsports] and Ken {Breath] and their team I wouldn’t be back where I am today,” says Hicks. “They made the process quick and easy – which seemed impossible at the time -- and got me back to competition in better shape than I can even put into words.”

Hicks returned at the beginning of the 2016 series in top shape and ready for competition.

“The rehabilitation of both injuries was relatively seamless, and he worked hard and was consistent,” said Heisel, who coordinated Hicks’ entire treatment plan as he does for most of the teams, drivers and crew of NASCAR.

And consistency is key for NASCAR’s best, including Hicks, who’s still over the wall at blazing speed every weekend on pit road…air gun in hand