Why Position-Specific Injuries are Common in NASCAR 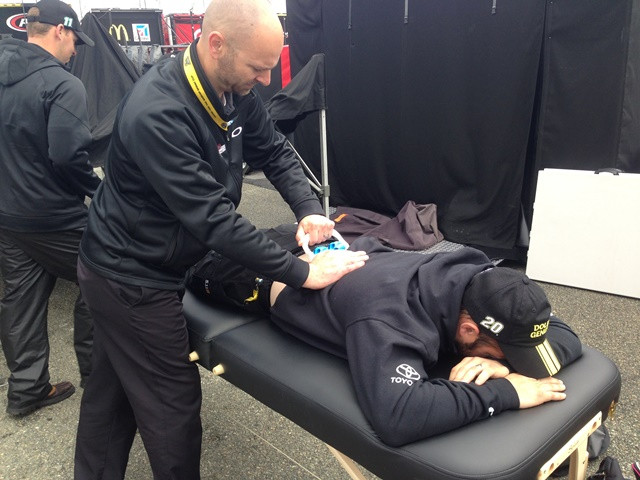 “In what other sport do you get a 15-second break every hour?” –Dale Earnhardt, Jr.

These days NASCAR pit stops are closer to 12 seconds than 15. As athletic performance has grown in importance in racing, teams likewise have fine-tuned their physical fitness strategies to shave critical seconds off pit stops. The speed of pit crew maintenance is part human performance, part skill, and part pure adrenaline.

In some close races, every fraction of a second counts.

Sports medicine in recent years has gravitated towards studies that track the injury rate of various sports, but epidemiology in motorsports is still evolving. At OrthoCarolina, part of our motorsports team’s job is to continuously collect data that can be used for preventative medicine and techniques in racing. In NASCAR, like many sports, drivers and crew are susceptible to certain injuries depending on the job or role they play on the team. We see position-specific injuries in pit crew members in particular due to the repetitive and fast-paced nature of their job.

Ken Breath, Manager of Motorsports Outreach shared what NASCAR injuries his medical team sees the most:

Ken Breath, PT, ATC, LAT serves as Manager of Motorsports Outreach for OrthoCarolina and assists in evaluating motorsports needs and coordinating coverage for all teams. He has provided extensive therapy to the motorsports community for many years.

Cartilage 101 – What Is Cartilage and What Does It Do? World Champion Power Lifter Calls Total Hip Replacement a "Miracle" Hitting the Gym Just Weeks After Surgery How to Get Started With Mountain Biking in Charlotte 5 Exercises You May be Doing Wrong and Why: Dr Majors and Sportology Sports Medicine at OrthoCarolina Behind the Scenes: Athletic Training at the College Level
View All Related