Where to Go Skiing & Snowboarding in the Southeast 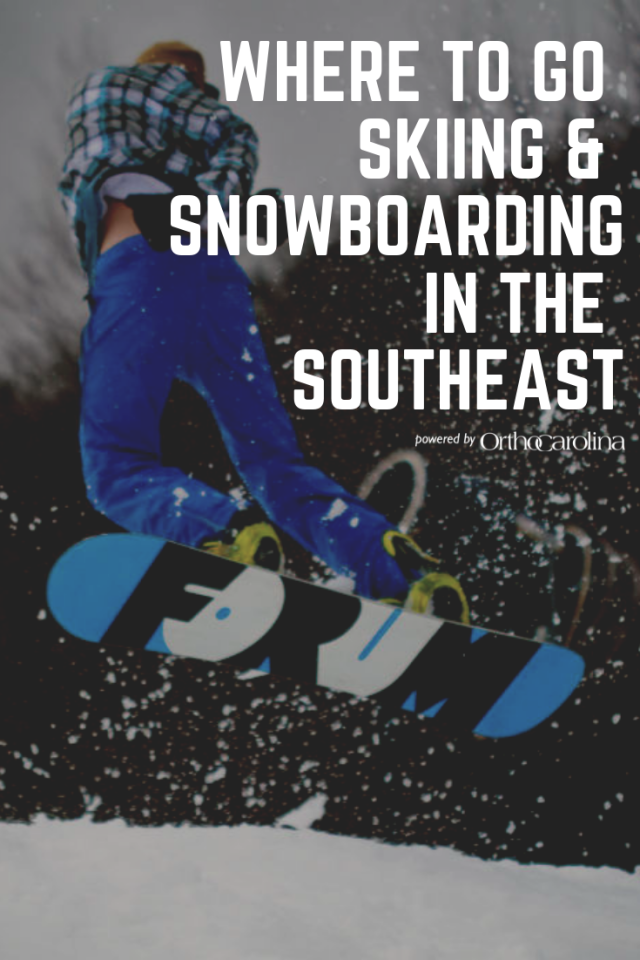 Most ski mountains in the Southeast are about half as tall as those out West, but they still generate big-time excitement and draw healthy crowds. In fact, skiing and snowboarding are more popular than ever in the Southeast.

That’s partly because the resorts have embraced technology that improves conditions on the slopes. They’ve deployed new snowmaking guns that produce greater loads and can be activated quickly when the temperature reaches an ideal 28 degrees Fahrenheit. With the new technology, they can also blanket skiable terrain using less energy and water.

At the same time, resorts are attracting more visitors by adding amenities like ice skating and craft breweries. Plus, they’ve added mountain biking trails and ziplines to entertain people throughout the year. With all of the improvements, there are more reasons than ever to hit the slopes in the South. To help you plan a winter adventure that’s closer to home, we’ve highlighted some of the best places to go skiing and snowboarding the Southeast.

With a vertical drop of 1,003 feet and 24 slopes and trails, Wintergreen Resort is a perfect destination for the whole family. It offers runs that are divided evenly between beginner, intermediate, and advanced difficulty. Plus, there’s with a tubing park that’s three football fields long and an award-winning terrain park. When you need a break from the slopes, book an apres-ski massage at The Spa at Wintergreen, and then enjoy craft cocktails and Mediterranean cuisine at The Copper Mine Bistro.

The elegant Omni Homestead Resort is more a winter adventure sampler than a ski resort, with skiing and snowboarding on 10 slopes, plus a terrain park, cross-country skiing, and snowshoeing trails, ice skating, and tubing. It’s best known for the posh accommodations in the historic inn, a luxury spa, and the magnificent, heated indoor pool that’s fed by a mineral spring.

Beginner to intermediate skiers and snowboarders dominate at Winterplace, where more than 75% of the terrain is accessible to those new to the sport. Play in the terrain park, take the whole family tubing or start with a lesson on the non-intimidating First Timers slope. Reserve a cabin on the mountain, or stay at the lodge at Pipestem Resort State Park for sledding, cross-country skiing, snowshoeing, and hiking on more than 18 miles of trails.

Located in a state park, Canaan Valley Resort offers unexpected perks like a lodge, campsites and cabins, restaurants and pubs, and a spa. You can ski 47 runs ranging from beginner to expert, or explore more than 18 miles of cross-country skiing and snowshoeing trails. There’s also a tube park, ice skating rink, and miles of hiking trails outside the park in Dolly Sods Wilderness.

If you travel about 7 miles northeast of Canaan Valley you’ll reach another West Virginia ski area, Timberline Four Seasons Resort, which get on average 150 inches of snow each year. You can ski and snowboard on 40 slopes, including the longest trail south of Vermont. For those who prefer cross-country skiing, there are nearly 40 miles of trails nearby at White Grass.

West Virginia is also home to Snowshoe Mountain, one of the most well-known ski areas in the Southeast. It boasts 60 trails, a 1,500-foot vertical drop, and some of the longest runs in the region. Lake effect snow dumps an average of 180 inches, making for the most reliable powder in the South. For boarders, there’s a halfpipe and two terrain parks. There’s also tubing, snowmobiling, and horseback trail rides.

Beech Mountain Resort holds the distinction of being the highest-elevation ski area in North Carolina, with 17 slopes up to a mile long and a solid 830-foot vertical drop. Beech averages 80 inches of natural snow a year, with sledding, tubing, cross-country skiing, and a craft brew with your name on it slopeside at Beech Mountain Brewing Co.

The largest resort in North Carolina, Sugar Mountain has 125 acres of skiable terrain, almost all of it designed for beginner to intermediate skiers and boarders. Add tubing, ice skating, and guided snowshoe treks, and Sugar makes the perfect weekend getaway for families who ski at different levels. Dine at the foot of the mountain in Banner Elk, an emerging foodie town with everything from upscale steakhouses to sports bars.

Appalachian Ski Mountain courts skiers with specials like discount snow day passes, Midnight Blast night ski and ride events, and deep-discount, half-night passes. For snowboarders, there are three terrain parks with something for every level of rider. The lodge has that old-world European feel, and the mountain towns of Boone and Blowing Rock are minutes away.

Another great option for first-time skiers and snowboarders is Cataloochee. Just outside Smoky Mountains National Park, the 25-acre ski area has 14 slopes with a comfortable 740-foot vertical drop, plus a terrain park, and snow tubing. Snowmaking on 100 percent of the skiable terrain makes for wintry conditions from mid-December to March.

At 3,400 feet elevation, Sapphire Valley counts on 100-percent snowmaking for a short season of beginner to intermediate skiing, snowboarding, and tubing. Lift tickets are some of the most reasonably priced in the Southeast.

Another less-expensive ski and snowboard resort is Wolf Ridge, located just outside Asheville. It offers 15 runs, which are lighted for night skiing and riding. Take a lesson and run the lanes at the tube park, and then drop by the lodge for a burger by the fire.

Ober Gatlinburg, the only ski resort in the Smokies, has nine trails of mostly intermediate terrain perched on the mountain above Gatlinburg. Apres-ski attractions include an aerial tram that carries you to the top of the 1,800-foot long alpine slide, a 10-lane tubing park, and one of the largest indoor skating rinks in the Southeast.

Gym Class At Home: How to Keep Your Virtual Learners Active On the Water in Gaston County Light Activities Like Gardening Are Good for Your Physical Health 3 Must-Do Outdoor Adventures in Queen City Your Carolina Winter Adventure Bucket List 5 Top Fall Camping Spots in North Carolina
View All Related