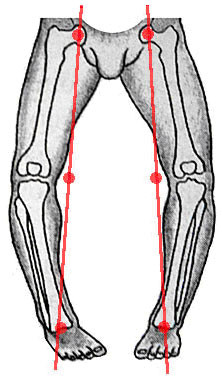 “Bowed legs” is a term used to describe the medical term genu varum, which means the knees fall outside the midline of the legs. This is a very common condition in small children and the peak age is 18 months. The bowed appearance of the legs may be related to rapid growth, early age of walking, and/ or other factors such as bone disease. Most genu varum is what we call physiologic, which means that it will resolve on its own and does not need treatment.

Bowed legs can be caused by actual bowing of the leg or by a twist in the lower part of the leg, giving the appearance of the leg being bowed. After a close examination of the legs, your doctor can describe what is going on with your child. In the instance that the lower leg is twisted (also called internal tibial torsion) observation is recommended as this too often resolves on its own as the child ages. We do not recommend special shoes or bracing for this as they have not been shown to make a difference.

Is this a problem?

Blount's disease is a condition related to genu varum that may be a problem needing treatment. It can occur in toddlers as well as in adolescents. It results from abnormal growth in the upper part of the shin bone (tibia). In a child under the age of 2 years, it may be impossible to distinguish infantile Blount's disease from physiologic genu varum. By the age of 2½-3 years, however, progressive bowing develops, and an obvious problem can often be seen on x-ray. Unlike physiologic genu varum, Blount's disease does require treatment for improvement to occur.

What are the treatment options?

Because most genu varum resolves on its own by the age of 2 ½, x-rays and treatment are not typically needed prior to that. If the child continues to have bowed legs at 2 ½ or only one leg seems to be improved, then x-rays will be taken. In the instance that there is a problem noted on the x-rays, your doctor will discuss treatment options which may include bracing and/ or surgery.