Tackling an Unwelcome Ankle Injury: How One Player Returned to the Field 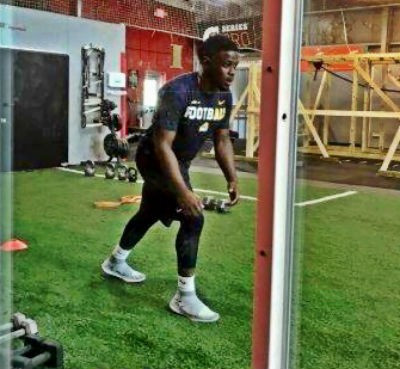 For JaQuan King, senior at Mount Tabor High School in Winston-Salem, football was life. He was set to be a top-ranked college football prospect in 2016; he had scored four touchdowns during a jamboree scrimmage and had high hopes of being recruited until he found himself on the ground holding a swollen ankle surrounded by trainers and players. He had a season-ending ankle injury, and wondered if he’d ever get to play again.

JaQuan went to OrthoCarolina the next day, where the staff took X-rays. His ankle was officially broken and he needed surgery right away. Dr. Scott Biggerstaff assured him that he should make a full recovery eventually, but JaQuan was understandably terrified for his future football career.

Thankfully, JaQuan’s ankle made a full recovery within five months. He was in and out of physical therapy in Winston-Salem for over an hour every other day slowly regaining strength to get back to normal. He began to pick up pace with walking, cone drills, jogging, and jump roping to regain mobility in his ankle. Once Dr. Biggerstaff cleared him for contact, he was able to get back into his training routine.

Despite being sidelined for the season, one college had been eyeing him since before his injury and decided to give him a chance at playing football at the collegiate level. Averett University was his chance to get back on the map. JaQuan was grateful for the opportunity and wanted to prove himself on and off the field. He focused on his schoolwork and began training during the summer before he was set to attend college in the fall.

Although he has plates and screws in his ankle, JaQuan is excelling and is now training harder than ever. He relies on a good warm up before each time he steps out on to the field to prevent further injury, and reports he has made a full comeback.

What We’re Doing in Physical Therapy – the McKenzie Method & Self-Treatment for Back Pain Indoor Cycling and Your Core How to Know Which Running Shoes to Buy Trying to Stay Hydrated? The Truth About Sports Drinks VS. Water 5 Exercises You May be Doing Wrong and Why: Dr Majors and Sportology 5 Top Fall Camping Spots in North Carolina
View All Related