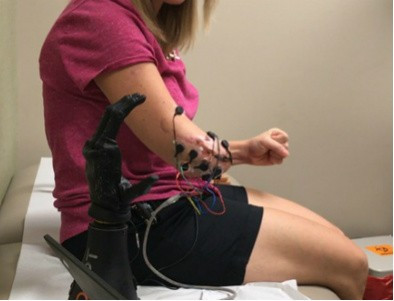 via Tracey Romero of Orthopedics This Week

Johnson, 32 years old, was bitten by a shark while snorkeling off the coast of the Bahamas in June 2017 and had to have her right arm amputated just below the elbow joint.

According to a news release, Gaston and Loeffler were her surgeons and their challenge was to keep the amputation below the elbow to ensure functional and sustained use of the limb. To do that they transferred nerves that controlled the hand from the severed limb to another part of the arm, reinserting those nerves into another muscle.

These relocated nerves grow into the muscle so that they can be used to control prostheses. Basically, Johnson’s brain will be able to control the actions of her prostheses in the same way it would her arm.

“Even when a limb is gone, nerves are still available for the body to use. Reassigning nerves to another part of the limb allows a patient easier control of their prosthesis. It also permits the nerves to function as they would previously, so the patient can simply think about the action they want the limb to perform and the prosthesis will comply,” said Gaston, said in the release.

Johnson is in the final stages of tissue healing and is learning to control a myoelectric forearm and hand. She is also able to function well with a body-powered prosthesis.

Gaston and Loeffler have also been adapting targeted muscle reinnervation (TMR) to other parts of the body including the forearms and legs. They completed the first surgery for the prosthetic hand with individual finger control in 2016.

They also lead The OrthoCarolina Reconstructive Center for Lost Limbs, a multidisciplinary clinic intended to help upper extremity amputees by offering patients the latest surgical innovations and technology to help them restore maximum limb performance and live life to the fullest.

“By coming to the clinic individuals who have amputations can meet with multiple healthcare providers and address a variety of daily challenges that affect their lives, including general health and wellness, mobility, independence and more,“ said Loeffler said in the release. “It is also a chance for patients to meet others who have their same injuries or who have had similar surgeries, which goes a long way in dealing with the emotional part of their injury.”

Gaston and Loeffler honored by the American Academy of Orthopedic Surgeons (AAOS) for their research For the Love of Painting: A New Landscape after a Traumatic Hand Injury ‘First in the world’ artificial hand allows individual fingers to move Carpal Tunnel & Trigger Finger Surgery - Case Study A Breakthrough in Medical Care: The Starfish Procedure Top Achievements in Charlotte Medicine 2015 - Glenn Gaston
View All Related