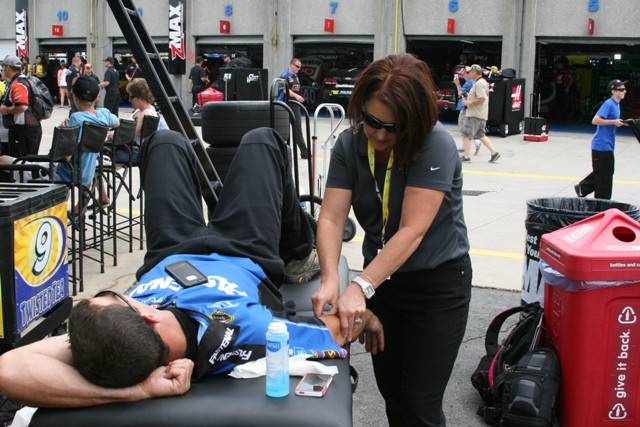 Wander between the team haulers on Pit Road during any NASCAR race and you’ll probably run into Angela Shirk, busy gauging what needs to be worked on.

Here’s a spoiler: It’s hard work, and it’s not always easy, but she loves it.

Angela talked to us about her job, the challenges she’s faced along the way and what it’s like to be a female trainer in such a male-dominated industry.

How did you originally get interested in Athletic Training?

Angela: Growing up in Mountain Lakes, New Jersey, with a father who played in the NFL for the New York Giants. I was really into sports and knew I wanted to work in the health field.

It was one of my coaches, a certified athletic trainer, who showed me I could have the best of both worlds.

I got my B.A. in sports medicine with a concentration in Athletic Training from Catawba College in Salisbury in 1993 and went on to work for a physical therapy clinic in Concord for the next three years, also working with an area high school’s football team.

Angela was later inducted into Catawba College’s Sports Medicine Hall of Fame in February 2012 for her post-graduation accomplishments.

What other professional roles have you had along the way?

Angela: I served as the general manager of a health and fitness center for a couple of years before I went to work for another physical therapy clinic working with patients in the clinic.

While at HealthSouth I helped open and build the patient load for a new clinic and worked on the marketing team.

As part of my work with HealthSouth I was also the assistant athletic trainer for the Carolina Cobras Arena Football team, and the Head Athletic Trainer for the Charlotte Rugby Team, traveling with them on weekends for several years.

Then I went to Carolinas HealthCare System and was Marketing Manager for all the outpatient physical therapy clinics.

During the mid-90s Angela met a pit crew coach who was also an athletic trainer and began volunteering her time every Tuesday, visiting all 8 of his teams, treating them and arranging for medical care as needed.

Describe your gradual transition into motorsports.

Angela: As I began to spend more time volunteering with pit crews, I got to know the athletes. They knew they could call and count on me for treatment and consultation, which was really important to them.

Eventually, I decided to go to work for Performance Instruction & Training (PIT) in Mooresville as an event coordinator and athletic trainer to better understand the sport and to try and make an impact on facilitating medical care for the pit crew athletes. It became alarmingly clear that the medical treatment for pit crews was practically nonexistent in motorsports.

I started the Motorsports Medical Task Force to bridge the gap from when pit crew members got injured at the track to when they came home and didn’t know what to do next.

For the task force, I teamed up with Motorsports Racing Outreach, family doctors, chiropractors, optometrists, internal medicine providers and Jerry Petty of Carolina Neurosurgery and Spine Associates. The program proved to be instrumental in getting pit crew athletes the treatment they needed.

According to Angela, the state of medical care in NASCAR at that time was almost nonexistent.

“Guys didn’t want to say a word to their coaches, didn’t want their teammates to know they were injured, because they were afraid they’d be replaced,” she says. “When they’d call a regular doctor they couldn’t get in for weeks. I created the task force so they could call me and be seen within 24 hours.”

How has your career continued to progress?

Angela: As I continued working at PIT I really began to get to know the pit crew coaches from the teams on an individual basis. They started to trust me and call me for medical needs for their guys.

I also had pit crew members calling me on their own when they were injured because they needed help getting back to work as fast as possible.

What advice would you give to those who aspire to be athletic trainers, especially females who want to break into NASCAR or any other male-dominated sport?

Angela: Remember that NASCAR is an incredibly long season, and you have to be willing to go with the flow and work long hours.

When it comes to working with the teams, have a thick skin and understand that it’s not the easiest sport to break into; you’re going to have to earn the trust of the athletes and prove that you know your stuff.

Do your best to relate to them, talk to them, but also be able to communicate with and relate to management and other staff. Customer service and professionalism are so important.

Angela has made student education a priority, starting an OrthoCarolina Motorsports Internship program that has affiliations with several area schools. She says it's a great way for students to see a different side of the sport.

Athletic Trainers – Health Care Providers on the Field and in the Clinic One of the Most Important People in NASCAR You Might Not Know Leading Provider in NASCAR Orthopedic Motorsports Care Seeks to Minimize Injuries on Pit Road En Pointe: What Ballet Dancers Should Know About Injury Prevention How to Spice Up Your Running Routine The Top 3 Ways to Spend Your Rest Day What's in a serving? How to know you're eating enough fruits and veggies Spring into Baseball: Tips for a Successful Season After running a race, what should someone do to speed up the recovery process?
View All Related