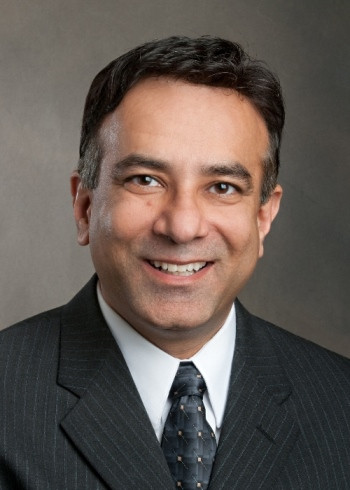 Dr. Sarjoo “Sam” Bhagia, a physiatrist with OrthoCarolina's Spine Center, passed away August 10, 2016 after a brief illness. Dr. Bhagia was adored and respected by his teammates, peers, patients and friends, and his easygoing nature and laughter were an innate part of who he was both as a person and a physician.

Joining OrthoCarolina (formerly the Miller Orthopedic Clinic) in the fall of 2003, Dr. Bhagia was involved in community teaching, orthopedic research, and service projects. One of his proudest accomplishments was the Physiatry Fellowship at OrthoCarolina, which will be a legacy he leaves behind at OrthoCarolina. Dr. Bhagia belonged to many professional associations including the American Academy of Physical Medicine and Rehabilitation, North American Spine Society, American Association of Physicians of Indian Origin, and many others, and was very involved in the Indian community.

One of his staff's favorite memories is playing Secret Santa during the holidays when Dr. Bhagia was "lucky enough to pick the hairpiece and mustache", which he graciously and humorously wore.

A talented and beloved physician, Sam Bhagia touched the lives of many and will be deeply missed by his OrthoCarolina family.

So very sad to hear of Dr Bhagia's passing. My deepest condolences to the family and friends. Dr Bhagia treated me for years and was by far the most skilled, kind, humorous and caring Dr's that I ever had.
- Angela D Loftis

So sad to read just now of the death of Dr. Bhagia. He was well liked by my family. He helped me, my husband and my mother. He did have a wonderful manner and sense of humor. Sympathy and prayers to Dr. Bhagia's family and to his friends at OrthoCarolina.
- Sheila Alba

Dr Bhagia was a wonderful doctor. He always was friendly and professional. He will be missed. Prayers to the family and staff as well.
- Joel S

Sorry for the Great Loss. May G-D Bless Him always. David Bobo
- My deepest feelings for Dr. Bhagia's family

Sending my deepest condolences to the family, friends and colleagues of Dr. Bhagia.
- Jakia N.

I have no words but a painful heart. My condolences to his staff and all privledged to know this man i called my Doctor for many years
- Lori

I will surely miss Dr. Bhagia. He was a very sweet and giving man with a great heart. I will never forget him. My heartfelt sympathies go out to his family for their great loss.
- Trivenia Webb

You will be missed Dr. Bhagia. My deepest sympathy and prayers for Dr. Bhagia's family
- Laura Hughes

My deepest sympathies to the Bhagia family. I always found Dr. Bhagia to be a true gentleman in our work at OrthoCarolina. He will continue to be missed.
- Jim Roberts

He was the sweetest most humanitarian spirit anyone could know. It was always my pleasure to see him in the mornings and hear him say, "Sandy what's new, how are things?" I adored this most gentle and kind man. He will always be missed. My prayers are for the healing of our practice, our patients and most of all, his beautiful family.
- Sandy Hughes

Praying for strength for his family and friends. I truly enjoyed working with Dr. Bhagia here at the Spine Center; he was always willing to help the patients as well as the employees. Dr. Bhagia will always be known as a kind and caring person who worked hard for OrthoCarolina and for the community, he will truly be missed.
- Yolanda H.

We had not met Dr. Bhagia but heard nice things about him My sister visited us from Bombay and hurt her spine . Dr. Bhagia treated her. It is so sad that he left the world at such a young age.Our condolences to the family. RIP Dr. Bhagia !
- Sarla Kumar

Such a kind and wonderful human being. He will be missed very much.
- Rosalie Terranova Ludolph- OC Help Desk

You will be greatly miss! Im so blessed to have worked with a awesome physician!
- Precious Johnson

I was lucky enough to know him as he was my neighbor. He was a very kind man, very involved father , devoted husband and a down to earth funny man. Very approachable. He will be deeply missed personally and professionally. Our deepest sympathy to his wife Priti and their children.
- Barbara Dillon

So sorry to hear! Great Doc but much more important a Great person. Referred many people to him with back problems. One the best!! The OC family will miss him so!!
- Chip Sigmon

I am devastated. I loved this doctor and he gave me so many shorts over the years and he would not give up until he found out what was wrong. RIP and Prayers for the Family.
- Becky Jenkins

To his family and his OrthoCarolina family, I am so saddened to hear of his passing. I had the pleasure of meeting him some time back. You are in my deepest thoughts.
- Kim Sassenberg

I am so saddened by the loss of Dr. Bhagia. He was recommended to me by a nurse friend last year and he was just the nicest most caring Doctor. My deepest condolences to his family, colleagues and friends.
- Mariam Quest

PRN Award Recipient Ranjan Maitra, MD NoDa Run Club: How running and beer bring a community together What to Expect After Hip Replacement World Cup Hub 10 Unique Ways to Get Outside in Charlotte This Spring Medical Breakthroughs at OrthoCarolina
View All Related