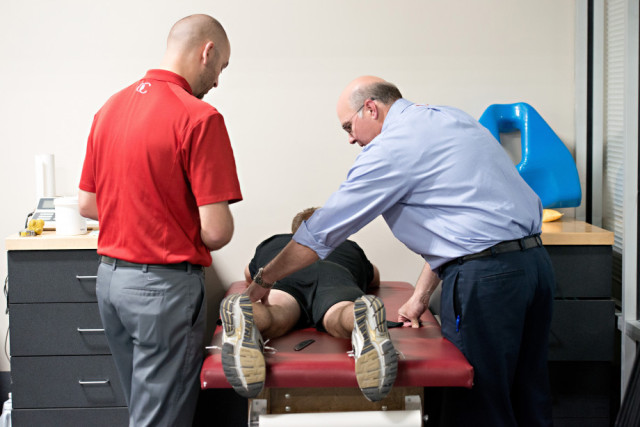 A Q&A with Director of OrthoCarolina Motorsports Bill Heisel

Aric Almirola won the 1000Bulbs.com 500 at Talladega Superspeedway on Sunday, October 14, 2018 in the No. 10 Smithfield Ford for Stewart-Haas Racing, marking his second-career Monster Energy NASCAR Cup Series victory. For Almirola, it was a sweet taste of success after a nearly-devastating injury in a wreck at Kansas Speedway in 2017 when he suffered a compression fracture to his T5 vertebra.

After his crash in Kansas, Almirola knew that he had sustained a spinal injury but he wouldn’t know how severe his broken back was until it kept him out of racing for about eight weeks last year. Director of OrthoCarolina Motorsports Bill Heisel, PA-C, oversaw Almirola’s injury and care in conjunction with doctors at Carolina Neurosurgery & Spine, and answered some questions about  Almirola’s injury and recovery.

What exactly is a compression fracture?

BH: A compression fracture is an injury that is of significant enough magnitude to cause loss of height of a vertebral body. This is an injury that affects every way that you move and impacts your core. It typically occurs with axial load to the spine.

Where is the T5 vertebra and why is it so important to the spine?
BH: There are 12 thoracic vertebrae and five lumbar vertebrae that are part of the axial skeleton of the human body. T5 is important as it is an attachment point for the ribs in the back. Injury to that vertebra generates some difficulty with deep breathing and expansion of your rib cage.

How severe was Almirola’s issue, compared to other back injuries that have happened to drivers in recent years?
BH: Almirola’s T5 vertebra injury was more severe than the back injuries suffered in 2013 by Denny Hamlin and in 2016 by Tony Stewart. His injury sustained at Kansas resulted in 15-20% loss of height of that vertebra which has the potential to cause some kyphosis or forward bending of the spine from a postural standpoint. He had to wait long enough to make sure that the bone would heal and was stable.

It’s been said that slow and steady wins the race. Racing certainly isn’t slow, but would you say that slow and steady is appropriate when it comes to injury recovery?
BH: Aric had to develop strength in the muscles around the spine to support the spine and continues to do those exercises today in order to minimize the potential for kyphosis.

What could have happened if Almirola or another driver with an injury like his had tried to race too soon after the injury occurred?
BH: The potential for a burst fracture would have been there, where the vertebra is crushed and fragments of bone could affect the spinal cord.

Do you think Almirola won the race at Talladega because of how he recovered from injury?
BH:  He won the race because he’s a talented driver with an outstanding team that provided him with a great racecar. The perfect blend of driver and equipment is the ticket to the finish line…but it takes strong mental and physical work ethic to recover from something like a compression fracture and come back to win a race.

Are you an Almirola fan? Who’s your favorite driver?
BH: I don’t have a favorite driver and as a result I am able to maintain objectivity and respect for the care that OrthoCarolina Motorsports provides throughout the garage.