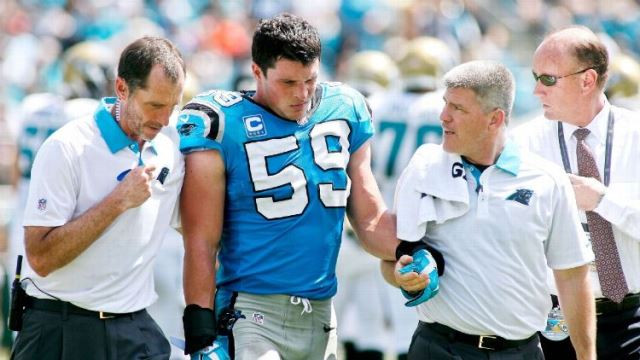 Being an NFL athlete is no easy feat. Those guys are constantly training, but not all NFL players focus on the same areas. It largely depends on the position they play.

However, if you have ever wanted to train like an NFL player, Aaron Hewitt, PA-C and former athletic trainer for the Minnesota Vikings, gave us some examples of exercises NFL players do on a regular basis, depending on position. If you want to be a wide receiver, get running. If you want to be a running back, get squatting. These exercises are just part for their training regimen, but hopefully these moves keep your NFL dream alive!

Running Backs
Running backs have to be quick, both mentally and physically. Their job is to receive handoffs from the quarterback, catch passes from the backfield and block some big dudes. As a result, these guys focus on lower-body strength and agility.

Offensive and Defensive Linemen
Offensive linemen pass block the quarterback and protect him, or run block for a running back. Defensive linemen try to eliminate these blocks and tackle whoever has the ball. These guys need to be strong. Linemen spend a lot of time working on pushing and pulling type movements.

Linebackers
Linebackers are strong and fast. They tackle running backs and tight ends and rush the quarterback. Basically, they go after whoever has the ball. Like linemen, linebackers pay special attention to improving upper body strength.

Wide Receivers:
Quite simply, these guys need to catch the ball, be fast and be able run far. As a result, wide receivers do a lot of aerobic conditioning exercises.

Tight Ends:
Tight ends are special. They have a lot of the same responsibilities of receivers and offensive lineman. They block for the quarterback and running backs, but also run into the field and catch passes. Tight ends need to be strong, be able to catch a football and run like a receiver.


Even if you do these exercises daily, we can’t promise you’ll be selected in the 2018 NFL Draft. It certainly can’t hurt to try though!

Aaron Hewitt, PA-C, is a physician assistant with OrthoCarolina Sports Medicine and is a former Assistant Athletic Trainer with the Minnesota Vikings (NFL).

I'm 79- weigh 160, will try these exercises for one year and try out for the Panthers next year.
- Bill

Go with Your Gut: How What You Eat Affects Your Life So what exactly is CrossFit? I hear that quite a lot... Treating Sore Muscles with Cold Therapy OrthoCarolina Sports Training Center Adult Fitness Classes Running + Beer: A Hoppy Way to Work Out Dynamic Stretches for Runners
View All Related