Curling in the Carolinas 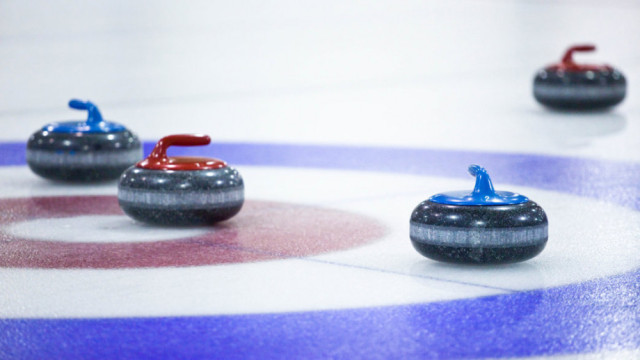 I crouch down at one end of the ice, much like a sprinter poised for a relay. Up on my toes with one foot precariously planted on a slippery Teflon pad, I push off into a part forward lunge, part yoga pigeon pose. From this precarious position, I launch a 42-pound rock toward a target 140 feet away, wondering how long I can hold on to this stance, and my dignity, before I’m flat on the ice, staring at my opponent’s shoes. Who knew curling could be this tough?

Deceptively slow-paced to the untrained eye, the sport of curling is, in reality, a unique combination of athleticism, balance, strategy, and teamwork that’s hard to appreciate until you get out on the ice and give it a try. More like a chess match than ice hockey, it’s rich in history and traditions, and it’s catching on in the Carolinas.

Curling’s origins can be traced back to around 1540 on a frozen loch in Scotland, making it one of the oldest team sports around. By the 19th century, what started out as a stone-throwing contest evolved into formalized clubs, rules, and competitions that spread to cold-weather countries across the globe.

Curling debuted at the first Winter Games in 1924 but wasn’t granted official medal status until the 1998 games in Nagano. The number of participating countries and athletes continues to grow and competitions include world senior and junior championships. In 2018, men’s and women’s curling is returning to the Winter Games in PyeongChang, along with the much-anticipated debut of mixed doubles play. Also, the 2018 Winter Games for athletes with disabilities will include the largest number of teams to date competing in wheelchair curling.

Build it and They Will Come

Walk into the Charlotte Curling Association facility just north of downtown and you’d never guess that, just a few years ago, a small group of mostly armchair curlers watching the 2010 Winter Games in Vancouver lit up a grassroots effort to make this dedicated curling arena a reality. The lobby is a cozy members club, complete with fully-stocked bar, pro shop, game tables, and theater seating at huge picture windows overlooking the ice. You can grab your favorite craft brew and watch the curling action unfold on overhead screens. This is one of those everybody-knows-your-name pubs where you feel instantly at home, even if you don’t know a thing about the sport. Questions, and beginners, are welcome.

While most curling clubs rent time at ice rinks, this facility, run 100% on volunteer enthusiasm, is one of only two dedicated venues in the Southeast. Charlotte’s tight-knit curling community gathers from September to May for bonspiels, tournaments that can be more like a reunion than a competition, and competitive and recreational league play six days of the week. Club members travel together for bonspiels in cities ranging from Wilmington, N.C., and Greenville, S.C., to Tampa, Atlanta, and Richmond, Va. They’re even travelling to Slovenia for an international tournament, along with a river cruise on the Danube.

Rules of the Game

First lesson—ice skating skills won’t do you any good here. Beginners wear tennis shoes with rubber grippers for traction and step on a removable Teflon pad to glide. More advanced players wear curling shoes, with one rubber sole for traction and one Teflon sole for glide. Teams of four face off on a long, narrow expanse of ice called a sheet, taking turns delivering their eight polished granite rocks as close as possible to the center of the target at the opposite end of the sheet, called the house. On their turn, each curler delivers two rocks under the watchful eye of the skip, the team’s master strategist who calls the shots from their vantage point inside the house. When all 16 rocks have been delivered, the score is added up for an end. Games are usually eight ends long, 10 in championships.

The concept of delivering the rock sounds simple enough, but it turns out that there are lots of variables to get in your way. First, the rock rotates, or curls, as it glides, in what feels to the beginner like totally unpredictable trajectories. Second, players on your team can encourage the rock to travel farther and curl less by sweeping, an all-in scrubbing motion with the broom that creates a thin film of water on the sheet surface. Players on the opposing team can sweep your rock to move it away from the center of the house and out of bounds.

All this sweeping can burn up to 800 calories over the course of a two-hour game, making curling a perfect low-impact aerobic workout for just about anyone. Curlers with mobility issues use a delivery stick to grab and push the rock, an adaptation that allows for an incredibly wide range of ages and abilities to participate. Charlotte Curling Association’s 250 members range in age from 5 to 85 and include the largest group of wheelchair curlers in the country.

Pre- and post-game rituals can be as elaborate as the tournaments themselves. Broomstacking at the conclusion of eight ends signals a return to the bar, where the victorious team buys the first round and the defeated curlers buy the second. Special occasions may call for a broomshooter, which involves teammates drinking shots in unison from shot glasses mounted on a single broom. Teams often choose a theme for their bonspiel attire (think pirates at a bonspiel on the North Carolina coast), and outrageously gaudy pants, made fashionable by the Norwegian curlers in Vancouver, continue to trend in curling circles.

Charlotte Curling is expecting the Winter Games to generate a spike in interest and memberships. They plan to cap their member total at 350 and start a wait list, so now’s the best time to start sweeping. They offer two-hour introductory lessons at various times throughout their season, some with medalists from the Winter Games. From there, you can jump into membership or learn the finer points of the sport by enrolling in their four-week course. You can also drop in at one of their free open houses during the Winter Games to throw a rock and enjoy food trucks, local brews, and curling on their widescreen TV.

WELL! That saying that it is never to late to learn, is so true. Thanks for the History Lesson.
- Anntoinette Ryals