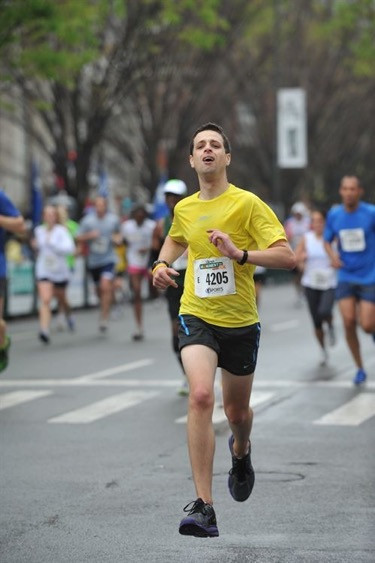 In the sports radio world, sitting on the couch, eating junk food and drinking beer can be the norm.

I ran in high school, but during college and my early broadcast career, I quit running and gained 40 pounds.  The weight gain was a wake-up call to make a change. I started running again, signed up for 5K and 10K races, gained extra energy, and lost weight.

Seeing the positives from running inspired me to start the Primetime Run Club. You can love listening to and watching sports while making healthy choices.

The Primetime Run Club has been a fun way to connect with listeners in a new way. The run club goes on a brisk, easy three to four-mile run every Thursday at 7:15 p.m. We meet at the Beasley Media Group Studio (on South Blvd) near uptown Charlotte.

If I had one piece of advice for runners it would be to listen to your body. I increased my mileage too quickly this spring and injured my IT Band. I ignored the discomfort and shooting knee pain, trying to tough it out on runs.  Eventually, the pain was so bad I could hardly run, let alone walk.

I was treated by Matt Himsey, a physical therapist with OrthoCarolina. He reviewed my biomechanics and individual muscle and leg strength and found an imbalance in my injured leg. We worked on strengthening the injured leg, by adding in strength and recovery exercises. It was important to build this strength before I could get back into running.

Coming off my injury, I’m feeling strong and happy to be back with the Primetime Running Club. Being a long-time Charlottean, I’ve never actually run the Charlotte Marathon but have signed up to run the half marathon this fall.  Look for me hitting the pavement and say hi, the miles go by a little quicker when talking Charlotte sports.

Chris Kroeger is the Host of “Primetime” Sports Radio on 610AM WFNZ. To learn more about the Primetime with Chris Kroeger Run Club, Powered By OrthoCarolina.

Glad you're back out there, Chris! You worked hard to get there.
- Matt Himsey

The Top 3 Ways to Spend Your Rest Day Running reflections as I turn 40 Easy dynamic warm up for runners via the Charlotte Agenda Watch What You Drink: How Healthy are Sports Drinks? Your Running Form Matters How to Replenish Electrolytes
View All Related