A Top Dog’s Return: How a Charlotte Hounds Lacrosse Player Came Back from a Nearly Career-Ending Knee Injury 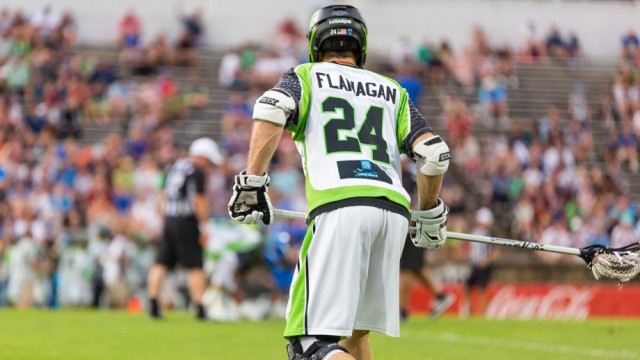 Ryan Flanagan, a UNC-Chapel Hill graduate and professional lacrosse player has had his fair share of injuries throughout his career but none like his latest. He spent six years with the Charlotte Hounds professional lacrosse team, working his way up to become one of the best players in the league. During a mid-season game against Denver in July 2016, he was defending the goal when an opposing player dove through the crease** and crashed into Flanagan -- putting his whole professional career in jeopardy.

The player’s direct impact with Flanagan’s knee caused it to bend inwards. Flanagan collapsed on the field right away, holding his knee in a panic. Dr. Donald D’Alessandro, the official team doctor for the Charlotte Hounds, was already on the field to assess the situation. Dr. D’Alessandro knew that the kneecap was dislocated, so his first step was to put it back in place immediately. Flanagan knew right away something was torn and it was going to be bad news for his career. Dr. D’Alessandro avoided putting pressure on the injured knee as they wheeled Flanagan off the field. Flanagan had torn his ACL, MCL and meniscus all at the same time – a rare multi-ligament injury that needed surgery right away.

When he got hurt, Flanagan already had plans to attend the Olympic Games in Brazil just a few weeks later to watch the women’s soccer team compete. His flight was booked, plans were made, but because of the injury, his whole trip was completely derailed and he was unable to travel.

“I was so upset I couldn’t make it to Brazil but I knew I had to take care of myself first,” he says.

With the help and care of his medical team, it was time for him to focus on healing. Dr. D’Alessandro explained that he had a plan to use the patella tendon to replace the ACL and a cadaver to replace the MCL. Flanagan was hesitant at first, but ultimately knew he was in good hands.

“As an athlete, we tend to get recommendations for some of the best doctors all over the United States, but I felt most comfortable with Dr. D, especially because he was on site and saw my injury first,” said Flanagan. “He was also located close by in Charlotte which made surgery, rehab, and recovery very convenient. The medical team at OrthoCarolina did a great job explaining what was happening and it was very comforting knowing what kind of procedure it was going to be.”

A Long Road Ahead

Post-surgery proved to be difficult for Flanagan when his body rejected the painkillers he was taking and he found himself in significant pain. As he began rehab with Matt Erbe, OrthoCarolina Sports Medicine physical therapist, they also noticed his knee swelling up. After running tests, his medical team discovered a blood clot, a whole new hurdle in his recovery. Flanagan reflects back on the rehab process and he says it was the little milestones that made it easier to get through.

“I took rehab very seriously and was trying everything I possibly could to get back to playing again,” he says.

After the blood clot, Flanagan’s recovery progressed well. At first, he couldn’t bend his leg for a few weeks, and he noticed the buildup of scar tissue, which is common with multi-ligament injuries. He began seeing Matt a few days a week for two-hour sessions for duration of nearly six months. Going through rehabilitation with OrthoCarolina, Flanagan was able to utilize aquatic therapy and an anti-gravity water treadmill that helped take the pressure off the knee as he recovered.

”Having a great surgeon is obviously important but dedication to rehab and put in the work to recover is the most important thing,” says Flanagan.

He compares his recovery to that of other athletes with similar injuries, such as NFL stars Adrian Peterson and Rob Gronkowski.

”There are a lot of tough injuries and recovery can be almost brutal,” says Flanagan. “Overall, my biggest takeaway was that everybody’s path is different with injury, and if you focus on healing you get through it.”

Flanagan was cleared to play in June the following year – about 10 months after his initial injury. He was now with a new team in New York and had a chance for a fresh start. Although his speed and quickness changed with a new knee brace, he was able to adjust and every week it got easier.

Despite a full recovery, Flanagan went through a period of knee swelling after his season ended with the New York Lizards in August. He was able to come back to Charlotte for a scope in October to remove more scar tissue to continue his recovery process. He plans to be back to one hundred percent soon and ready for next season with the Lizards.

*“Diving into the crease” in lacrosse is a term referring to when a player dives into the crease while shooting. The ball must cross the face of the goal before the shooter touches the ground, goal or keeper. This move is illegal in college and high school lacrosse. Source: Charlotte Hounds