A Tale of Two Surgeons: Father and Son, Working Side by Side 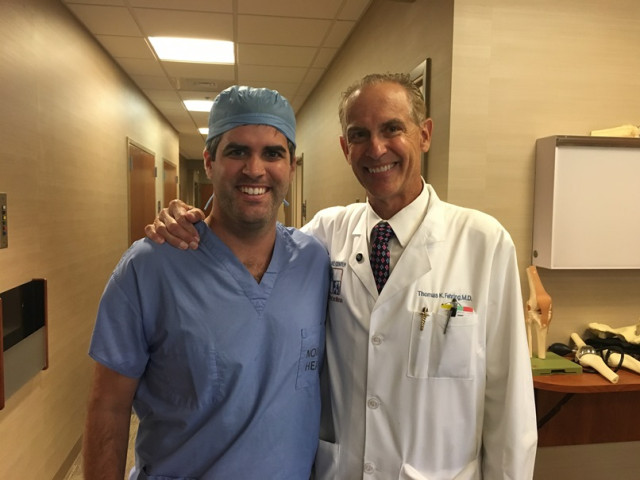 From a young age, Keith Fehring knew he wanted to be an orthopedic surgeon.

He didn’t have to look far for inspiration. His dad, Dr. Thomas “Tom” Fehring, has been an orthopedic surgeon specializing in hip and knee replacements for thirty years.

“I saw the impact my dad has on his patients and knew that I wanted to help people in the same way,” says the younger Fehring.

“He’s a lot like his mother. He’s a smart, observant kid,” says the elder Fehring.

Keith Fehring is now Dr. Keith Fehring. He and his dad practice side by side at the OrthoCarolina Hip and Knee Center, seeing patients and performing surgeries. Both Fehrings focus on hip and knee revisions, types of surgery that generally take more time and can be extremely complicated. Revision joint replacements are difficult cases that other surgeons outside OrthoCarolina often won’t take on due to their complexity.

Before almost any revision surgery he does, Keith Fehring discusses the case with his dad. For nearly any situation in the operating room that Keith Fehring encounters, Tom Fehring has seen it before and has years’ worth of advice for his son. On the other hand, Keith Fehring has a newer perspective and training in modern techniques for difficult problems to share with his dad. At a weekly hip and knee meeting, they collectively discuss the most difficult cases and decide together how to handle them.

“We discuss cases frequently,” says the younger Fehring. “We scrub in and perform cases together sometimes. It’s nice to have another set of eyes and another opinion.”

In 2017, the Fehrings were two of thirty orthopedic surgeons who participated as faculty at a revision hip and knee arthroplasty conference, the International Congress on Joint Replacement, held annually at the Mayo Clinic. Ironically, the Mayo Clinic is also where Keith Fehring did his fellowship. At the recent conference, Keith Fehring lectured on the surgical approach to revisions for total knee arthroplasty. His dad, Tom Fehring, spoke on custom implants for severe bone loss in hip replacement.

“Even thirty years in, it’s a challenging job,” says the elder Fehring. “But people get better from the work we do.”

Adds the younger Fehring, “I value and respect his opinion immensely. There’s no one out there like my dad.”

-- 7/8 years ago Dr. Tom replaced both of my hips. After a few weeks I was/am taking long brisk walks daily. Recently Doug, a worker at the auto repair shop where my car was being serviced offered me a ride home. During the ride I mention my hip replacement and what a terrific job Thomas Fehring had done. As usual I touted his work recommending him highly. Doug just looked at me laughing, stating that a time back Dr Tom had replaced his hips. Doug also mentioned Dr. Keith. Small world.
- Bill O&#039;Connor

I had Dr.Thomas Fehring referred to me my another orthopedic surgeon that would not do my problematic double hip replacement surgery. It's now 6 years later and i am still doing excellent. This surgery gave me a new lease on life because I had reached the end of my abilities to work and function with the pain and inability to remain mobile much longer. I thank God every day for surgeons and doctors with the skills and intelligents to do this type of work. I believe I even met his son , but I do not think I realized at the time that Keith was his son. I wish great things for Kieth and his father in the future and my God bless them both.
- Eddie Poplin

So blessed to have been able to work with you both....keep up the great work!!!!
- Kathy Coleman

Hello Dr. Keith Fehring and Dr. Tom Fehring. A few years ago I tore my meniscus while running and I received a cortisone injection. Now my keep is swollen but I don't have any insurance and I wanted to know if you guys could help me. Running has been my release during my post drug addiction era. On March 16, 2017 I celebrated 11 years of being drug free thanks to Jesus! I recently moved to Charlotte from South Carolina a few months ago. I'm working part time but seeking full time employment. It really hurts not being able to run and I can't wait until I can run again. Your help will be greatly appreciated and I hope to hear from you soon. Thank You Terry Garrett
- Terry Garrett
Reply From: OrthoCarolina

Hi there Terry. Thank you for the note. Please contact the Hip and Knee Center at 704.323.2564 to request an appointment. Thank you again.