A Guide to Winston-Salem’s Greenways 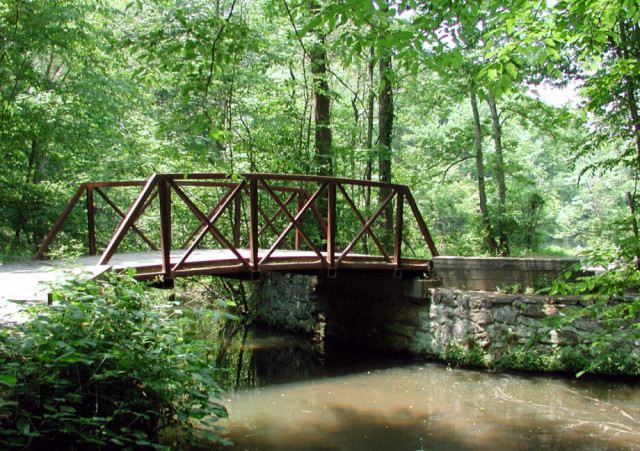 The city of Winston-Salem’s early efforts to preserve natural areas and connect neighborhoods with recreation corridors, dating all the way back to the 1980s, are paying dividends today.

There are 23 miles of established trails on the ground and more on the way, making it easy to walk, run, or bike from the shops and restaurants of downtown, or the universities and the offices and labs of Innovation Quarter, to the shores of Salem Lake.

It’s even possible to visit Winston-Salem’s oldest historic sites, Bethabara Park and Old Salem, without getting in your car. From creekside paths to rail trails, Winston-Salem’s greenways offer some of the best running and riding in the Triad.

The wide, hard-packed dirt trail slopes gently, gaining elevation on one side of the lake with a slight downhill on the other side, accommodating walkers, runners, and off-road cyclists of all skill levels. Water stations and benches along the way make ideal break stops, and restrooms are located at the park office.

Mile markers track your progress, and you’re likely to see deer, turtles, herons, egrets, and more wildlife on the trail. Raptors are drawn to the skies overhead in search of the plentiful bass and crappie in the 375-acre lake.

If you don’t have your own bike, you can pick up a set of wheels at the bikeshare station at Salem Lake or any of the other seven stations along the greenway system. For a longer ride or run, hop on the connecting Salem Creek Greenway heading west toward downtown.

It’s a flat and fast ride, walk, or run along the 5.2-mile Salem Creek Greenway toward Marketplace Mall on the southwest side of the city. The paved trail runs parallel to Salem Creek, with plenty of trees and green space to take a break or stop for a picnic lunch along the way.

With Winston-Salem skyline views to the north, you’ll pass by the ball fields, playground, and dog park at Washington Park and the rolling fairways of Reynolds Park Golf Course before reaching the junction with the Strollway, another paved route that takes you north into downtown. Spur trails along the route at the Peachtree Greenway, the Strollway, and the Long Branch Trail add 7 miles of out-and-back distance to your journey.

At the Strollway junction, it’s 1.2 miles north into the city. You’ll know you’re getting close when you cross under Interstate 40 and neighborhoods and green spaces give way to shops and restaurants. Continue another half-mile north to reach the Old Salem Visitor Center at the trail’s end.

By itself, this 1.2-mile paved rail trail is perfect for a short walk with strollers or a family-friendly bike ride. But a distance run or ride on the Strollway and connecting trails is another great way to spend a day riding or running the Salem Lake to downtown route and visiting Winston-Salem’s most fascinating historic attractions at Old Salem.

Whether you walk, run, or ride to Old Salem, plan to spend several hours touring this incredible living history museum. Founded in 1766, the town was settled by Moravians, Protestant missionaries who originally immigrated from the Czech Republic to Pennsylvania, and then traveled south into the Carolinas.

Expect to see cardinals, bluebirds, chickadees, and woodpeckers in the woodlands, and meadowlarks and wild turkeys in meadows. Ducks, herons, and kingfishers are common along the banks of Muddy Creek. A dog park and playground just off the greenway at the halfway point are the perfect spot to take a break or turn around.

The Bethabara Greenway Trail connects another historic site, the 1753 Moravian settlement of Bethabara, with nearby neighborhoods and shopping. The 2.7-mile paved, wood chip, and boardwalk greenway winds through the wetlands and forest of a 183-acre wildlife preserve that’s home to 126 bird species, to pass the entrance to Historic Bethabara Park, one of the earliest villages and trading centers in the Piedmont.

Stop off at the park to walk the trails and take a guided tour of the German church and a palisade fort dating back to the French and Indian War.

Winston-Salem’s newest greenway, the 1.7-mile Long Branch Trail, is having a big impact on how people live, work, and play in downtown. The paved, north-south path connects Innovation Quarter, site of a former R.J Reynolds tobacco warehouse that’s grown to include 150 companies and five academic institutions, with miles of greenway along Salem Creek and Salem Lake.

At the trail’s junction with the Salem Creek Greenway, you can head east to the Salem Lake loop or west to the Strollway, downtown, and Old Salem. In either direction, you can enjoy miles of green space and continuous bike and pedestrian-friendly routes to some of Winston-Salem’s biggest attractions.