A Different Kind of Bodywork: How OrthoCarolina Works with NASCAR Teams 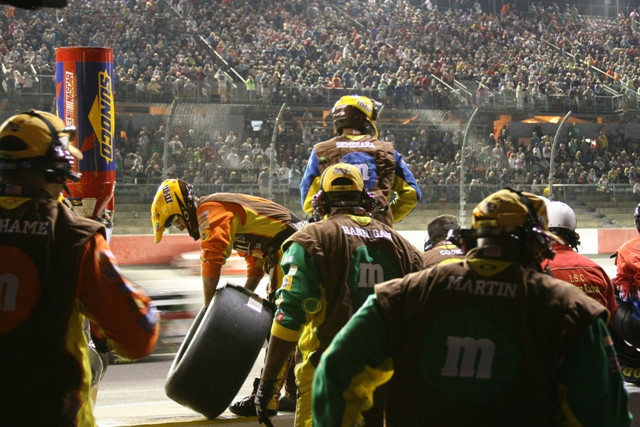 By the time “Drivers, start your engines!” roars above the din of an excited NASCAR crowd, the OrthoCarolina motorsports team has been at work for many hours.  They almost blend in with the pit crews among the air guns, jacks, fuel cans and tires that cover Pit Road, making round after round to stretch and treat crew and drivers.  At almost any given race during the long NASCAR season, these dedicated providers will remain in the pits with the teams for the duration of races that can last many hours.

Like the teams, they revel in the thunderous action and celebratory burning of rubber tires, but throughout, they maintain a laser focus and steadfast eye on what they came to do – keep the crews healthy and ready to work.

Ken Breath, PT, ATC, LAT, is one of several OrthoCarolina providers who travel to most Sprint Cup Series races during the season. We talked to him about what his routine at the track entails and how he works with the crews prior to and during a race:

Ken: While the pit crew guys set up the cars, I normally check on drivers. Some have specific pre-race needs, and others I just check on to see if they need stretching or follow up on previous issues. Once the crews are done with pre-race set up I check in with them to see if anyone has active problems that need to be addressed and perform any treatments that they need. One of the biggest needs is stretching, and I go from pit box to pit box stretching the crew as requested.

When you stretch the pit crew, what muscles do you work on?

Ken: I do a general stretching program with most of them that includes backs, hamstrings, quads and the rest of the leg. If they need specific stretching such as arms, shoulders or other upper body, we work on that specifically.

What types of physical risks does the pit crew face?

Ken: Even once a car is on Pit Road it may be coming at them up to 55 mph. They’re preparing for the pit stop, and odds that the car can hit them increase. Other drivers coming in also risk hitting them. The crews carry 70-pound tires and 90-pound gas cans that can put more strain on their shoulders and backs. They have to worry about tripping over the air gun hose and having to quickly unplug a huge gas can before the car takes off. The incredible speed and precision required in their work shows the physical demands required.

How long are you with the crew on a typical race day?

Ken:  We fly out with the team and arrive at the track early the morning of race day. We start rounds and treatment at the time the garage opens, usually 7 or 8 hours prior to the race. We are on Pit Road throughout the duration of a race, which can last anywhere from 3-5 hours, and we stick around for any post-race needs. It’s always best in Victory Lane.

Ken Breath, PT, ATC, LAT is part of a team that provides ongoing care for motorsports teams affiliated with OrthoCarolina during the long NASCAR season. Whether at the track in the pits or at an OrthoCarolina office, the job of the Motorsports team is to help keep drivers and teams healthy and aid in injury recovery.

How to Ride Your Bike Safely in All Kinds of Weather OrthoCarolina Hand Surgeons Discover Children, Adults Born without Hand Have Brain Functionality to Control Advanced Prosthetics Cycling in Charlotte Current Concepts in Upper-Extremity Amputation #TheFreeWorkout Running reflections as I turn 40
View All Related