7 Spine-Tingling Stories of Adventures in the Woods 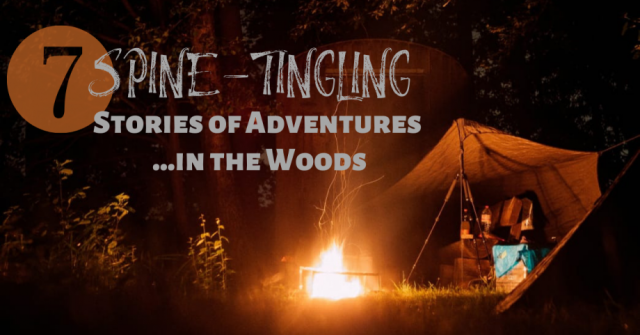 Telling ghost stories around the fire is a beloved tradition of most camping trips. They ratchet up the fear factor even more when they’re true—reminding us, not so subtly, that the inherent risks of being outside can go from minor and manageable to downright terrifying. These seven spine-tingling tales, from spooky sounds at the campsite to sinister strangers on the trail (with a few laughs in the mix to lighten things up) are sure to raise the hair on the back of your neck—and make for a surefire winner around your next campfire.

Lisa, who lives in New York City (and didn’t want to use her last name), was once hiking in southern Utah with a friend when they heard a woman’s voice, loud and clear, moaning in pain. The voice seemed to come from behind a nearby boulder. But when they ran over to help, no one was there.

Back at Red Mountain Resort, where Lisa and her friend were staying, they told a guide about the weird incident. The guide replied that, indeed, a lot of spirits are believed to reside in the area. “I can still hear the woman’s moans to this day,” Lisa says. “It was so eerie.”

Years ago, Kate Silver, of Chicago, was in Los Alamos, New Mexico, hiking Tsankawi, an ancestral pueblo village, with her now-husband, Neil. The couple encountered few people along the way—until they approached the end of the route, when they caught up to a man walking slowly. They trailed behind him until reaching a large boulder that had a ladder affixed to it; they’d climbed up it before and now needed to go back down. But, inexplicably, the man remained there, standing with his back to the ladder, staring at the couple.

They raised their voices, discussing how they needed to use the ladder, and finally the man turned and went down. Silver and her husband followed. But the bizarre encounter wasn’t over at the bottom of the ladder. Instead, the man continued to stalk them: to the bathrooms, through the parking lot, and eventually to their car at the very end of the lot. They hopped in the car as fast as they could, and then the unthinkable happened: As soon as the couple was inside the vehicle, but before they’d had a chance to lock the doors, the man somehow made his way inside, even sitting down in the back seat. Terrified, “we turned around and started screaming,” Silver says. “‘Get the f---k out!’ Neil yelled. ‘Sir, you do not belong here!’ I screamed, unsure where the politeness came from. ‘Get out of the car, sir!’

“And, he listened, thank god. He listened,” she continued. The shaken couple left the man standing next to the car, hands in his pockets and looking scared, as they drove away. “I’m glad the guy left the car, and that we were both safe,” Silver said. “But when my hair raises as I think back on those moments, I know that he’s still around.”

Wendy Yanagihara, who lives in southern California, had an equally disturbing experience during a camping trip outside Moab, Utah, with a friend. As they set up camp, the pair opted not to use a tent fly so they could better enjoy the breeze in the warm temperatures. That night, mysterious footsteps crunched outside their tent. Yanagihara’s friend slept through it, but she remained wide awake—and very afraid. They were out in the middle of nowhere, after all, and they hadn’t heard a vehicle approach. So who—or what—was out there?

Yanagihara will never know, since she was understandably “too terrified to open my eyes or give any indication I was awake, because we could be seen through the mesh windows,” she said. “I lay there sweating and scared to move as the footsteps circled our tent. Eventually they went away. No motor, no other sound.” The next morning, after she told her friend what had happened, they looked outside and found large boot prints surrounding the tent—but, still, no evidence of anyone walking or driving up to the site.

Sometimes, if you’re lucky, outdoor experiences end up being more sweet than spooky. While on a camping trip with her then-boyfriend on the shore of Italy’s Lake Garda, Sarah Harvey, the couple was cooking sausages on a gas stove by torchlight when a frantic rustling began in the bushes nearby. The noises kept getting louder and louder, shaking the bushes and snapping branches. The two huddled together, expecting a wolf or wild boar to burst into their camp. But after the loudest sound of all, the mysterious creature finally emerged: “the fattest hedgehog I've ever seen,” says Harvey, who lives in Valencia, Spain. “A hedgehog. How could it have made so much noise? Scared us out of our skins.”

Carol Hyden, who’s from Tallahassee, Florida, and her husband, Doug, can relate. During a camping trip at a state park in west Texas, the couple was awakened in the middle of the night by an increasingly loud roar. “We cautiously peered out the flap of our two-person tent to see a herd of wild horses thundering past,” Hyden says. “The park ranger had not warned us of that possibility!”

When Rick Bergmann was seven or eight, he went camping with his family in Door County, Wisconsin. His parents had gotten into a little argument, so he left the RV to ride his bike while things calmed down. Along the way, though, he happened to look into a nearby parked car—and saw something that appeared, to him, downright terrifying.

“I saw what I thought was a ghoul devouring a girl in the backseat,” says Bergmann, who lives in Mundelein, Illinois. “In a panic, I raced back to the RV screaming for my mommy. Older me realizes something entirely different was going on.”

When Danielle Taylor, from Brookville, Pennsylvania was about the same age, she went camping in North Carolina’s Falls Lake State Recreation Area with an Indian Princess club. The group of girls and their dads happened upon a tall pine tree along the road to the campground, luminous with mysterious lights. “I remember being curious but apprehensive, and thinking that the tree looked like it was illuminated from the inside and glowing,” Taylor recalls. “As we approached, a naked couple jumped up from the base of the tree, grabbed their flashlight, and ran into the woods.”

Written by Jennifer Billock for RootsRated and legally licensed through the Matcha publisher network. Please direct all licensing questions to legal@getmatcha.com.

5 Fitness Trends Worth Following When You’re Over 50 Tips and Tricks for Fitting in At Least Three At-Home Workouts Per Week The Insider’s Guide to Lake Norman State Park Salt Caves and Spiced Cider: Where to Go to Banish the Winter Blues in Western North Carolina Your Guide to a Multisport Weekend in Burke County An Insider’s Guide to Charlotte Adventure Racing
View All Related